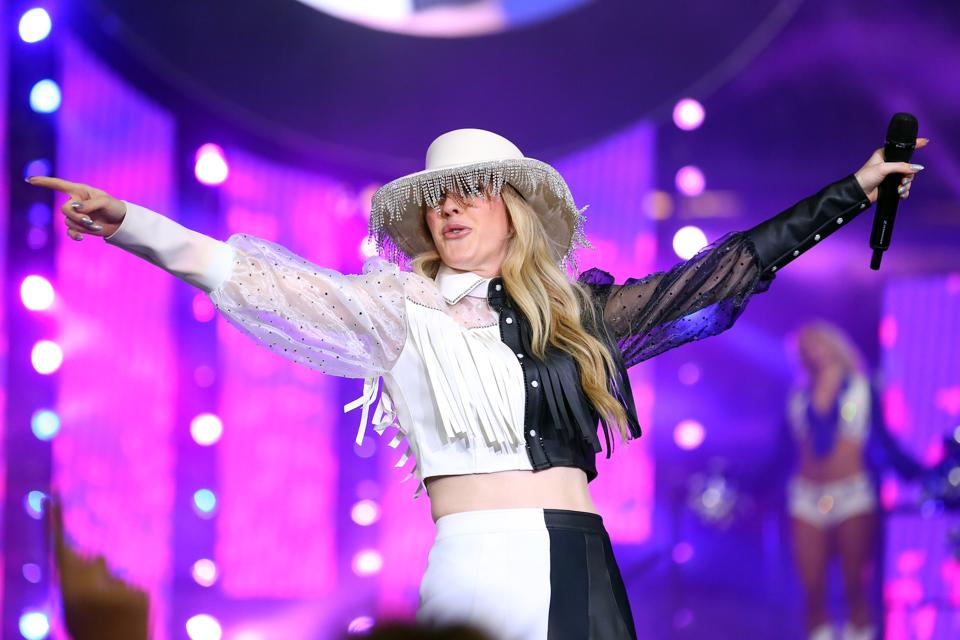 ARLINGTON, TEXAS – NOVEMBER 28: Ellie Goulding performs during halftime at the Thanksgiving game … [+] between the Buffalo Bills and the Dallas Cowboys at AT&T Stadium on November 28, 2019 in Arlington, Texas. (Photo by Richard Rodriguez/Getty Images)

It’s now mid-December, and the holiday season is in full swing. That means it’s time for Christmas songs to not only find their way back to the singles charts all around the world, but to completely invade those rankings in certain territories. That’s the case in the U.K. this week, where wintery tunes take up an incredible amount of real estate…and the special day hasn’t even arrived yet.

Music typically rises and falls faster in the U.K. than it does in the U.S., as it’s a smaller country and there’s a voracious appetite for what’s next, but somehow, one track has been able to hold on at the top of the charts and make history in the process. Tones and I’s “Dance Monkey” has now led the charge for 10 consecutive frames, tying the record for the most weeks at No. 1 for a song fronted by a woman. The catchy cut is on the same level as Whitney Houston’s “I Will Always Love You” and Rihanna and Jay-Z’s “Umbrella,” but it may pass them in just a few days.

Once again, Mariah Carey’s “All I Want For Christmas is You” is back inside the top 10 on the U.K. songs ranking, an area it’s already very familiar with. The tune returns to the top tier almost every December, and since it’s already up to No. 8, it could have a very bright future ahead of it in the coming frames.

As his other current single “Heartless” reaches the top 10 in just its second week on the chart, The Weeknd’s even-newer song “Blinding Lights” enjoys a lofty debut on the list, though one that’s just a few spots below the highest tier. “Blinding Lights,” another taste of what the R&B musician has been working on lately, starts at No. 12, becoming the Canadian superstar’s twentieth top 40 in the U.K.

Just two weeks into its time on the ranking, Ellie Goulding’s new single “River,” a cover of Joni Mitchell’s classic, vaults to No. 14. The track is the singer’s attempt at scoring the Christmas No. 1, a coveted title in the country, and she’s officially in the running now that “River” is performing very well and seems to have momentum. The cut is Goulding’s twenty-third top 40.

Led by Carey’s “All I Want For Christmas is You,” the U.K. singles chart is completely dominated by an influx of holiday-themed songs, with standards and recent favorites all returning to the tally now that it’s December and people are streaming the titles that get them in the right mood. There are 26 Christmas songs inside the top 100 this frame, and 20 of them are new to the list this week (new meaning they weren’t present last time around, but most have been here before).

Without Individual Contribution Your Company’s Mission Is Worthless

Here’s Why We Should Laser-Launch 100 Spacecraft To...