Mark Ingram Thanks Higher Power For Landing With Baltimore Ravens 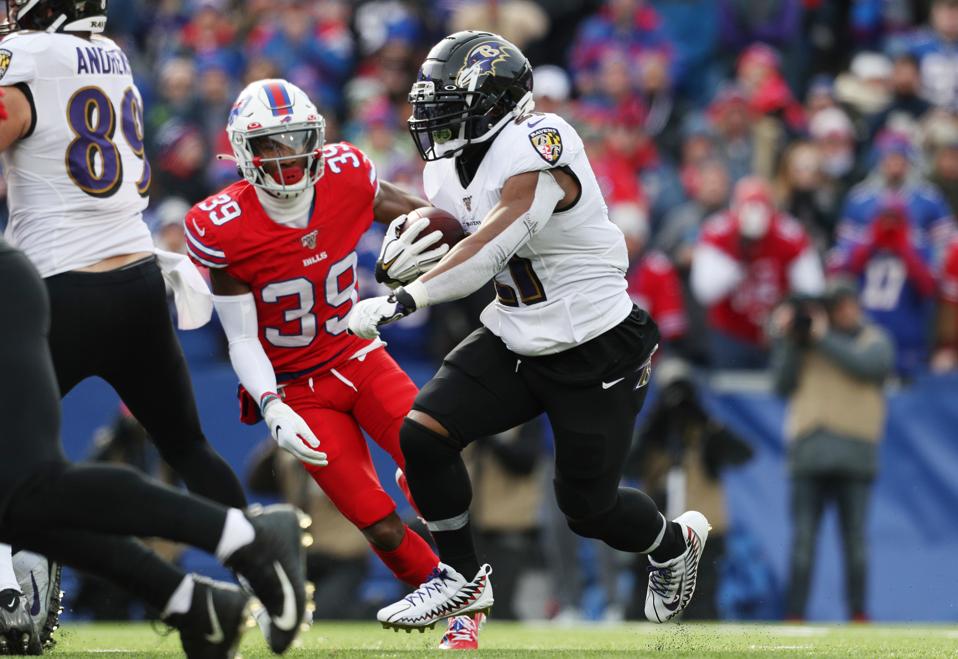 ORCHARD PARK, NEW YORK – DECEMBER 08: Mark Ingram II #21 of the Baltimore Ravens runs with the ball … [+] during the first half against the Buffalo Bills in the game at New Era Field on December 08, 2019 in Orchard Park, New York. (Photo by Bryan M. Bennett/Getty Images)

Mark Ingram thinks it was almost divine intervention that brought him to the Baltimore Ravens.

“God is good. The Lord blessed me to be in a great position, where I’m in a great organization around great teammates and a great coaching staff,” Ingram said. “So, I thank the Lord for bringing me here. I thank my teammates, my coaches, every single fan or anybody who voted for me, my peers around the league. It’s a special accomplishment. I don’t take it for granted. I’m thankful. God is good. I appreciate it.

Ingram signed a three-year, $15 million deal with the Ravens as a free agent in March after spending his entire eight-year career with the New Orleans Saints. He didn’t waste any time making an impact in Baltimore.

Ingram recently earned this third-career Pro Bowl selection and ranks fourth in the NFL with 14 total touchdowns (10 rushing and four receiving). Ingram has also run for 963 yards, which ranks 11th in the league.

While he has been one of the team’s most productive players, Ingram has also embraced a leadership role in the locker room. He can be seen supporting his defensive teammates on the sidelines and has been a steadying force for some of the younger players on offense, most notably quarterback Lamar Jackson.

“He means a lot to us. He’s the heart of the team, to me,” Jackson said. “Each and every game, each and every practice, each and every day it’s just Mark [Ingram II]. And what you guys see on TV is what you get throughout the days, behind the scenes. That’s Mark, and we love it. He helps us out a lot. He brings the groove to the team, the excitement.”

Ravens coach John Harbaugh has also been impressed with Ingram’s leadership ability. It’s been an added bonus to the physicality he brings to the team. Harbaugh has also developed a strong rapport with the veteran running back.

“I didn’t know his personality as much. I didn’t really know how boisterous he was and how outgoing he was, so to see all that has been fun,” Ravens coach John Harbaugh said. “It’s really been fun to be around. He really gets it. He knows how to treat people, knows how to practice. He has a lot of energy at practice and bolsters everything we’re trying to do that way.  Weight room … Obviously, he plays with great passion – great passion and great energy.

“[He’s] very physical. You’ve seen him. You know what I’m talking about there. So, yes, I would say all those things are as good as you could hope for.”

The Ravens (12-2) are riding a 10-game winning streak and have already won the AFC North. Baltimore can clinch home-field advantage throughout the playoffs with a victory over the Cleveland Browns in Week 16.

Expect Ingram to play another key role in achieving that goal.

“It’s huge. It’s huge. Anytime you can lock a one seed, you get a first-round bye and you know you’re at home,” Ingram said. “That’s huge, and it’s a huge advantage for us. It’s something that we’re going to be focusing on accomplishing this week.”

Astonishing Photos Of The ‘Wolf Moon Eclipse’ As...

Startups Tackling The Plastics Challenge Can Win The...

Cities In Poland And Italy Among Europe’s 100...