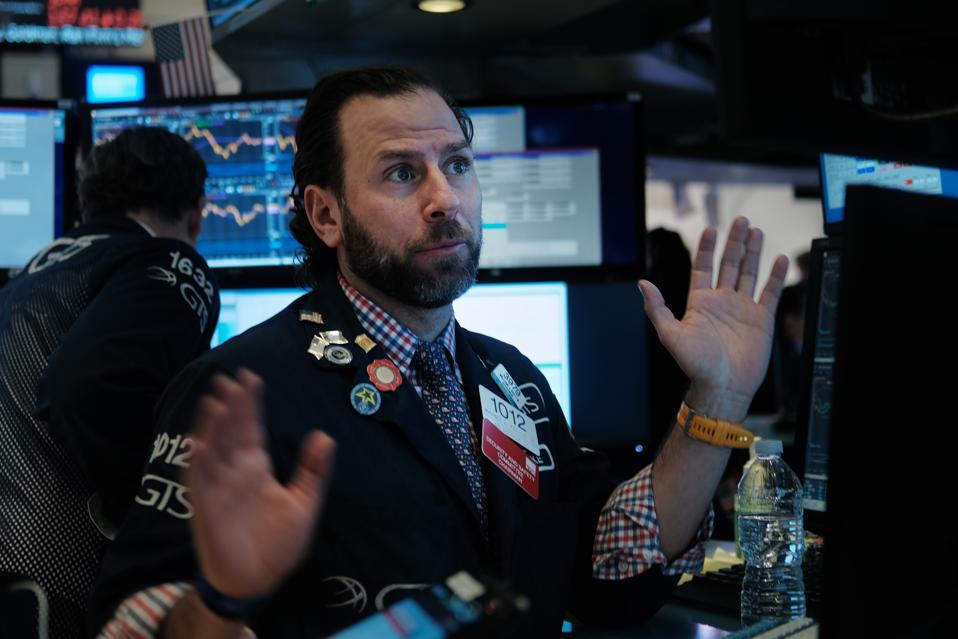 As concern continues over the global economic impact from the Coronavirus, stocks fells over 200 … [+] points. (Photo by Spencer Platt/Getty Images)

Over a month ago, I started seeing signs of complacency amongst investors, both anecdotally, and in the sentiment data. One of my clients told me that you “did not need to understand the stock market, because it only goes higher.”

There have been overbought readings from a number of market indicators. I have also been concerned that investors seem to be buying on the assumption that the new Wuhan coronavirus was not a big deal or a concern for investors.

These concerns are not based on insights from my days as a biochemist. Rather, it comes from my many years of observing that the market does not like uncertainty. Up until last week, the market’s optimism has been based more on hope than concrete information. The human toll alone should be enough cause for concern, but multiple changes last week to the infection criteria were not reassuring. The unknown economic impacts related to Wuhan coronavirus should have decreased market optimism much earlier, and only now seem to be making an impact.

It was difficult to understand why Wall Street, which is often skeptical about financial data on Chinese companies, was willing to accept China’s often changing official view of the outbreak. Friday’s release of the IHS flash composite Purchasing Managers Index (PMI) increased the selling pressure. This report covered both manufacturing and services, and showed a drop below 50 for the first time since 2013. The chart from IHS Market does not seem very encouraging. 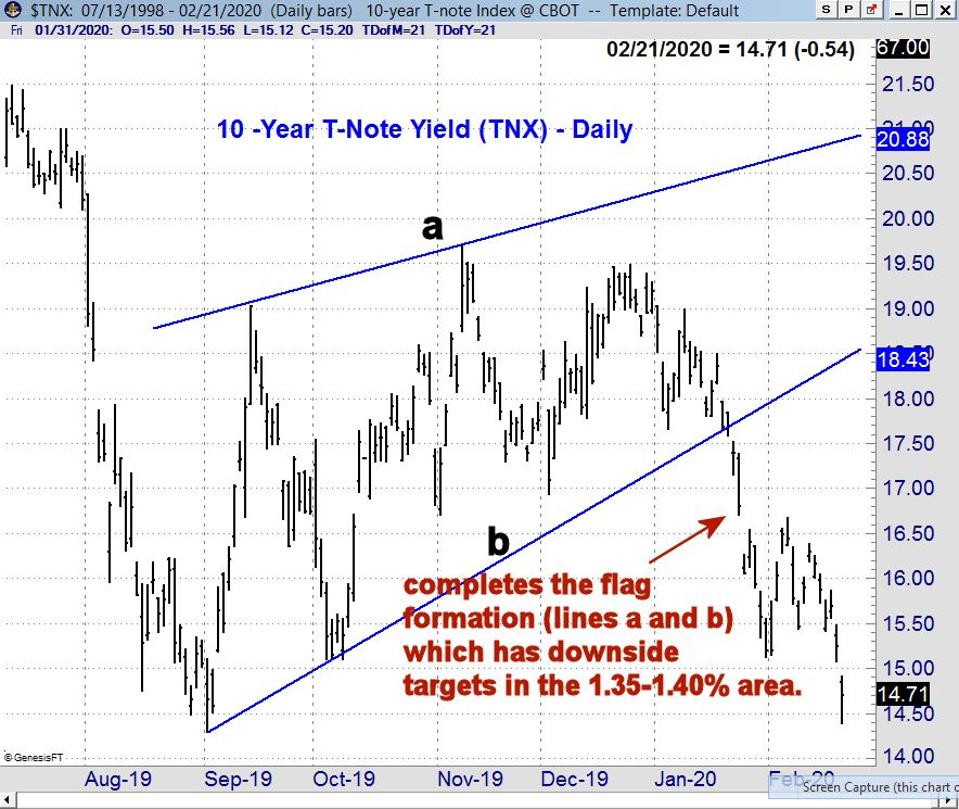 Also looming over the investment markets has been the new all-time low in the 30-year US Treasury Bond Yield. For technical analysts, this low was not too surprising, as the close on January 24 was a strong sign that the rebound in yields from the August 2018 low was over. I also warned a few weeks later that “such as decline in yield could coincide with a further decline in stock prices”.

The sentiment data from the American Association of Individual Investors showed that bullish sentiment remains quite high, with the bullish % now at 40.6%, compared to the reading of 20.3% on October 10. Bearish sentiment has increased 2.3 percentage points to 28.7%, which is still below the historical average. As I discussed earlier this month, sentiment data, in conjunction with technical indicators, can help predict turning points in the market.

With all this build-up, it’s no surprise that the major averages showed some weakness last week. The market-leading Nasdaq 100 Index was down 1.84% after closing above its weekly starc+ band for six of the prior seven weeks. This meant that it was in a high-risk buy area, as was the case for TSLA, AAPL and MSFT that I discussed last week.

On Thursday, I noticed that the Advance/Decline numbers were a bit strange. The major averages closed lower, but surprisingly, there were more stocks advancing than declining on the NYSE. This is not normal, and could be due to sharp corrections by some major stocks. The selling was more pronounced on Friday as twice as many NYSE stocks declined than advanced. 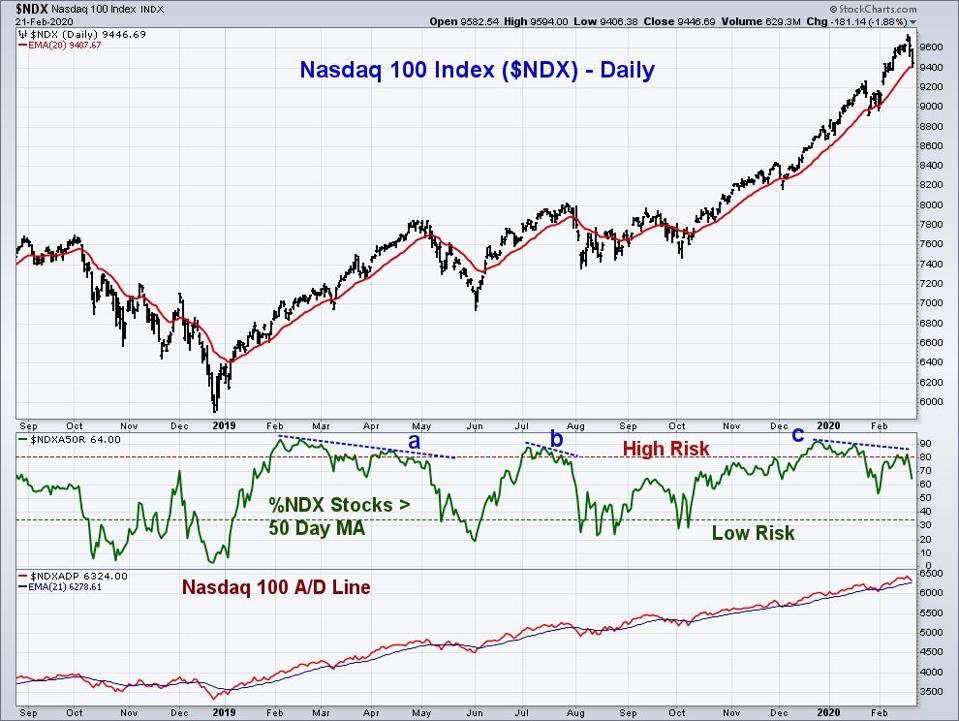 It will take more than last week’s decline to reduce the risk. NDX has just dropped to the 20-day Exponential Moving Average (EMA), with next support at 9270, which was the January high. The widely-watched 50-day Moving Average is at 9035, which is 4.3% below Friday’s close.

Below the price chart is a plot of the % of Nasdaq 100 stocks that are above their 50-day Moving Average (%NDX). A reading above 80% is consistent with an increased level of risk as most of the stocks have already moved higher.

As the NDX makes higher highs, the %NDX can start to diverge, which warns of a correction. This was the case in April (line a). A smaller divergence formed in August (line b), before the tariff-triggered decline.

The %NDX has formed a series of lower highs since December (line c) and with Friday’s drop appears to have topped out. A much lower-risk buy opportunity would occur on a drop to the 30-40% area.

The Nasdaq 100 Advance/Decline line is still above its Weighted Moving Average (WMA), and therefore positive. Two of the six daily A/D lines that I follow have now turned negative, but all of the weekly A/D lines are still in positive trends.

The volume in the Spyder Trust (SPY) reached the highest levels of the month on Thursday and Friday while the market was declining. This turned its on balance volume (OBV) negative. This is another indication that the market’s uptrend may be slowing.

The best performer from the table was the SPDR Gold Trust (GLD), which was up 3.83% for the week. At the end of January, I took a technical look at GLD as well as the gold futures. Though gold has a seasonal tendency to top out in February, the technical outlook then was positive and did favor higher prices. 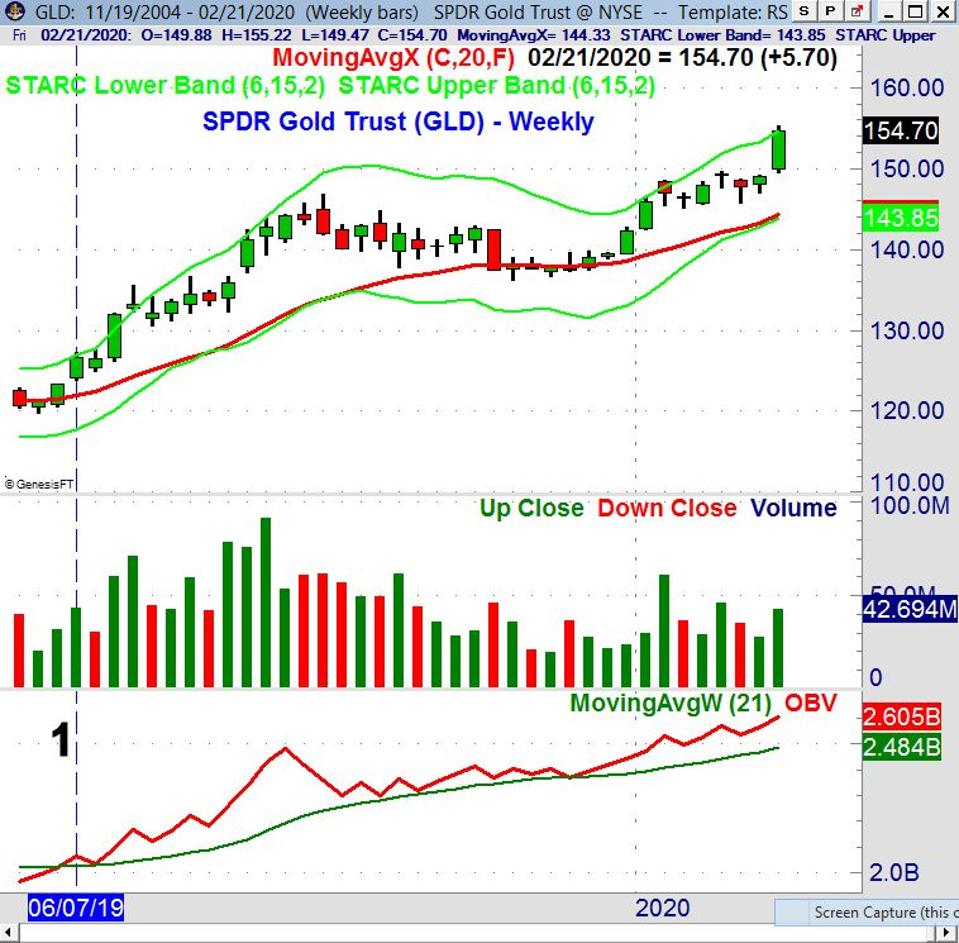 GLD closed last week above the weekly starc+ band which means it is now in a high-risk buy area. Protective stops in the $136-area held in late 2019, when the risk was much lower. Its on balance volume has been above its WMA since June 7, 2019 when GLD closed at $126.59. The volume increased last week and made a new high. Clearly, a pullback in the next few weeks would not be surprising, but there are no signs yet of a top.

However, a further decline over the short term is always possible. Monday’s news cycle in China will start hitting the US late on Sunday, which might impact stock index futures before the NYSE opens on Monday. Stocks could drop to the more important support quickly, but a more likely scenario is that, after some more weakness, we will see another rally as part of a top formation. A further decline in the major averages is needed to take market risk back to favorable levels.

The Results Are In: Board Gender Diversity Is...