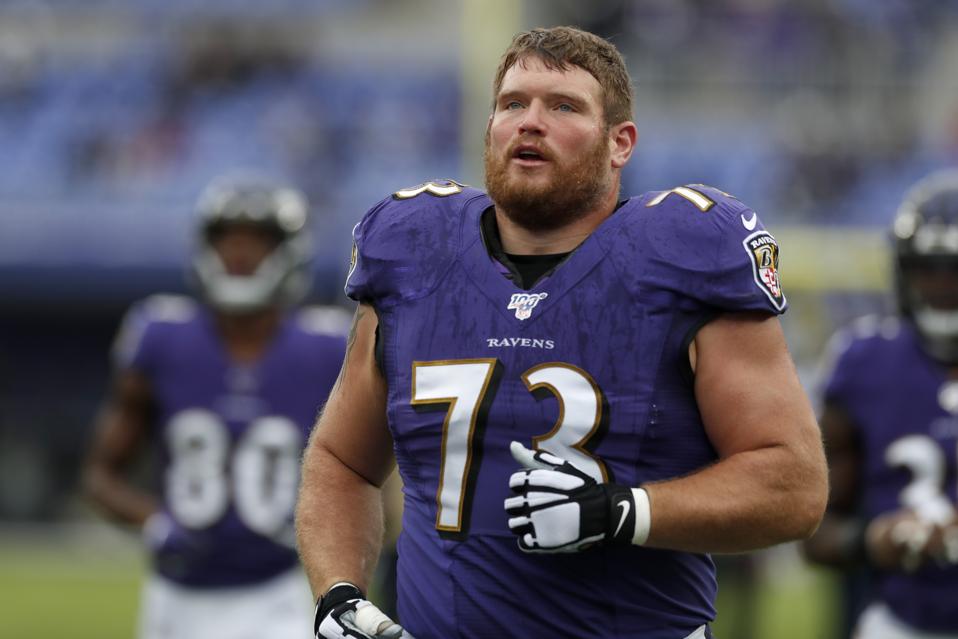 BALTIMORE, MARYLAND – NOVEMBER 17: Marshal Yanda #73 of the Baltimore Ravens looks on prior to the … [+] game against the Houston Texans at M&T Bank Stadium on November 17, 2019 in Baltimore, Maryland. (Photo by Todd Olszewski/Getty Images)

When right guard Marshal Yanda announced this week that he was going to retire after a 13-year career that featured eight Pro Bowl appearances and a Super Bowl title, the news was not exactly surprising. There had been some hints dropped during the season that this might be the veteran’s last, but now the Baltimore Ravens face the tough task of replacing him.

Yanda had been the anchor of the Baltimore offensive line for years and played a big role in the 2019 team setting an NFL record for rushing yardage as quarterback Lamar Jackson took his game to the highest level.

“I’ve never had as much fun as I had last year in 2019,” Yanda said at his retirement press conference this past Wednesday. “To be a part of that team was special and being able to walk away from the game on my own terms is so meaningful. I’m glad I can do it my way.”

The Ravens know the filling Yanda’s spot will be a difficult task, but it’s one they’re faced with now that the long-time guard has retired.

Their offensive line is very young and quickly developing, but now they’ve got to find a right guard. Ben Powers got plenty of playing time in that spot in the season finale against Pittsburgh and did very well, so the Ravens could decide to go with him or bring in a player using other options.

Still, it’s a tough decision. If the Ravens bring in another player and let Powers grow into his game behind him, that could help the team in two ways. Baltimore simply might go out and find another lineman or even give the job to Powers, but no matter how they do it, this won’t be an easy task.

“You can’t replace a guy like Marshal…that’s a tough one; I think we’re open for suggestions if you all have any suggestions, ” executive vice-president and general manager Eric DeCosta said at the press conference. “As great a player as he is, he’s a better person and a leader by example day-to-day, and the other guys see that. They feed off of that. It becomes contagious.”

Center Matt Skura, who missed the final part of the season after suffering a knee injury, feels the Ravens have players who can fill that rather large hole.

“Replacing Marshal is going to be tough. In 2017, I had to go and fill in for Marshal. The right guard spot is Marshal’s spot,” center Matt Skura said on the team’s web site. “It’s definitely going to be tough, but I think we have the right guys for the job and I know we have a lot of people ready to step up.”

Plus, Yanda could be a leader, which is something Harbaugh talked about in the retirement news conference.

“We had a saying a few years back that was Marshal’s saying: Embrace the grind,” Harbaugh said. “We made a t-shirt. That says it all. I think that is what Marshal did. He embraced every bit of his career, made the most of it.”

That’s why he will be so difficult to replace.

President Trump Says He Was Tested For Coronavirus, Will Suspend Travel From The U.K. And Ireland

Laying Out The Blueprint For Igor Shesterkin To...

The Countries Best And Worst Prepared For An...

The Workplace In The Time Of Coronavirus (Part...

EnGenius Cloud-Based Management For Networks Could Save You...