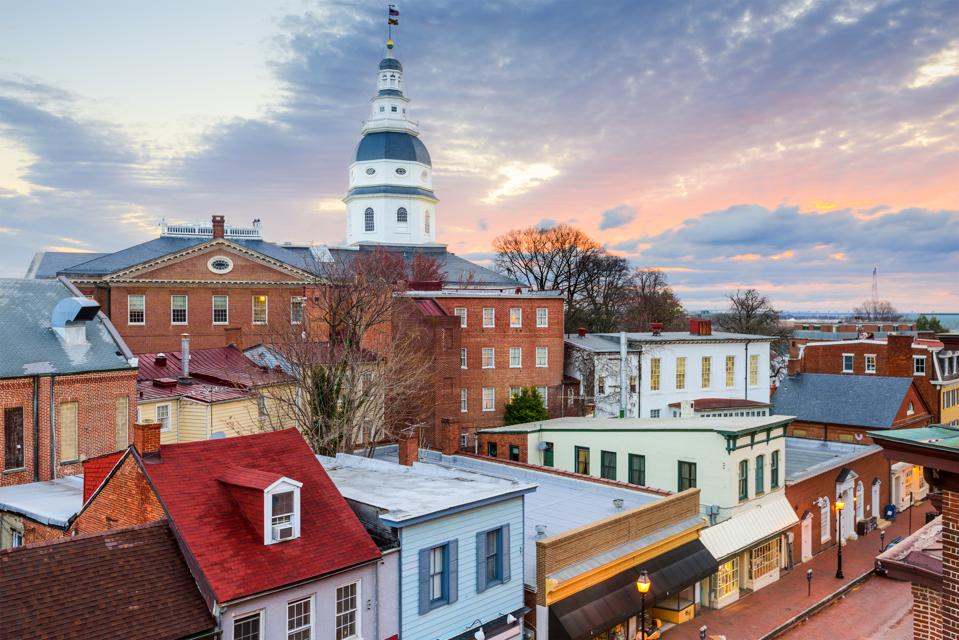 A national emergency that has shut down businesses across the country hasn’t deterred Democrats who control the Maryland General Assembly from imposing an unprecedented tax hike. They did so this week by passing House Bill 732, legislation that imposes a tax on digital advertising similar to what a number of European nations are calling for. Another bill (House Bill 932) that imposes a new tax on digital goods and services – such as e-books, streamed movies and music – also passed out of the Maryland House and Senate this week.

Standing in the way of this digital advertising tax’s enactment, in addition to Governor Larry Hogan’s (R) veto pen, is the contention by legal experts that the new tax runs afoul of both the federal International Tax Freedom Act and the U.S. constitution’s commerce clause. Governor Hogan has already made his opposition to the General Assembly’s efforts to raise taxes abundantly clear with the following tweet.

Despite a fiscal note that shows HB 732 would raise approximately $50-$60 million annually over the next five years, tax and legal experts contend that in reality the digital advertising tax will ultimately generate no new revenue for Maryland coffers. That’s because this tax, if enacted, would promptly be met with legal challenge that will have the matter tied up in the courts and likely struck down when it’s all said and done.

Maryland Attorney General Brian Frosh (D) even warned state lawmakers in a memo that there is “real risk that [the law] would be held preempted,” since the new tax would be challenged as a violation of the International Tax Freedom Act (ITFA), a federal prohibition against state and local taxation of internet access or discriminatory taxation of the internet. The ITFA was first signed into law by President Bill Clinton in 1998 and made permanent by President Barack Obama in 2016.

The digital advertising tax passed by Maryland lawmakers this week “would likely be preempted by the ITFA, unless advertising over the internet is different enough from advertising by other means that the two types of advertising would not qualify as transactions of sufficiently ‘similar’ services,” Attorney General Frosh noted.

“We know that it violates the Internet Tax Freedom Act,” Maryland Senator Serafini (R) said during a January 29 senate finance committee hearing on the digital advertising tax. Senator Serafini also warned of the compliance challenges presented by this new tax, offering a hypothetical situation in which a non-Maryland resident opens an iPhone app that utilizes their data during a layover at BWI. How would the proposed digital services tax be applied in such a situation, Senator Serafini asked. That is a question that supporters of the new tax have yet to answer.

Governor Hogan is expected to veto the bill, but Maryland lawmakers may try to override it, which requires a three-fifths majority vote in both chambers of the General Assembly, when they return to Annapolis in May. The bill, which also includes a tobacco tax hike, was approved with more than three-fifths majorities in both chambers this past week, so some Maryland lawmakers would need to have a change of heart between now and May in order for the veto override vote to fail.

During the aforementioned senate finance committee hearing, Maryland lawmakers were warned that the digital advertising tax, though marketed by proponents as only affecting large global corporations, would also hit Maryland small businesses whose bottom lines are being decimated right now by the current economic crisis. This could prompt some lawmakers who voted for HB 732 to rethink the wisdom of saddling Maryland businesses with a costly new tax at this time.

“The bill’s meant to snipe Facebook and Google, but instead it’s waving a bazooka in the general direction of Maryland business,” Matt McDermott, president of the American Advertising Federation’s Baltimore chapter, explained during the senate finance committee hearing on the digital advertising tax. McDermott also explained that the bill “is a choose your own adventure story premised on a thought experiment in a New York Times op-ed.”

The digital advertising tax passed by Maryland and the copycat bill pending in the New York Legislature bring together the more negative aspects of a gross receipts tax, in which non-profitable businesses can still face a large tax burden. Previous coverage in this space on the now-passed digital advertising tax walked through how the new levy will lead to tax pyramiding and a more opaque tax system:

In-state employers and consumers would ultimately pay the cost of the proposed digital advertising tax, as the added cost is passed along, though it does not show up as a line item on the final consumer receipt.

“If ultimately enacted, the Maryland and New York bills would impose an uncharted and sweeping new tax on digital advertising platforms that will have trickle-down effects on advertisers and in-state consumers,” Steve Kranz, Joe Bishop-Henchman, and Eric Carstens explained in a March 18 post on McDermott Will & Emery’s Inside SALT blog.

Another concern with state digital advertising taxes that was previously reported in this space is the fact that they would affect the global debate over digital taxes. Passage of the digital advertising tax in Maryland comes at a time when the US just succeeded in getting countries like France to back off for now on their digital tax proposals. The proposed French digital services tax has been suspended until the end of the year.

Legal experts like Ruth Mason, a University of Virginia law professor, point out that enactment of a state digital services tax, be it the one now sitting on Governor Hogan’s desk or the similar bill being debated in New York, would undermine the U.S. government’s work in framing the French version of the digital tax as discriminatory. “That argument is a lot harder when Maryland has one,” Professor Mason explains.

The final decision on this matter will likely not come until May, but it’s amazing to many that Maryland legislators thought now, in the middle of a sharp and historic economic downturn, was a good time to impose a new tax that burdens Maryland businesses with additional costs.

“The fact that the Maryland legislature is dumping these tax proposals on them at this time of crisis is really something to be upset about,” Jeff Friedman, a partner at Eversheds Sutherland’s Washington D.C. office, told Bloomberg Tax.

Passage of the digital advertising tax in the Maryland House and Senate proves once again that Governor Larry Hogan is the last and sometimes only line of defense that Maryland residents have to protect them against harmful and misguided policies.

The Best Things I Ate And Drank In...

Americans Will Shop High-Low For Home Furnishings And...

PayPal Processed More Transactions On May 1 Than...

How To Strengthen An Organization In Times Of...

Tessa Blanchard Under Fire Amid Allegations Of Racism,...