Breaking
2021 CES Consumer Storage
Senator Marco Rubio Called Out Twitter For Its...
The False Narrative Of Bitcoin’s Role In Illicit...
Leading By Example Into The New Year
Why Ethereum Has Hit An All-Time High As...
How You Leave Will Shape Your Legacy
The Next Evolution Of Digital Mental Health Support
Paizo And Pinnacle Team Up For Savage Pathfinder
Mammoth U.S. Borrowing Needs Meet Lower Foreign Participation,...
This Leader’s Work To End The Organ Donation...
SAP BrandVoice: Re-Thinking Tax Reporting And Collection In...
What ‘Backs’ The Dollar? Easy: Production
How To Create A Bulletproof Patent
Here’s The Same Financial Advice Given To Mike...
How AI Is Being Used In The Legal...
Consumer Health And Wellness Needs Bring New Challenges...
Home Business Mass Protests And Mayhem Across The U.S. Have No Impact On Stocks, What Gives?
BusinessFinance

Mass Protests And Mayhem Across The U.S. Have No Impact On Stocks, What Gives?

Despite escalating protests in cities across the country over the killing of George Floyd, stocks have continued to rally—showing a sharp disconnect between markets and the economy—as investors look past the civic unrest and bet on a successful economic reopening from coronavirus shutdowns. 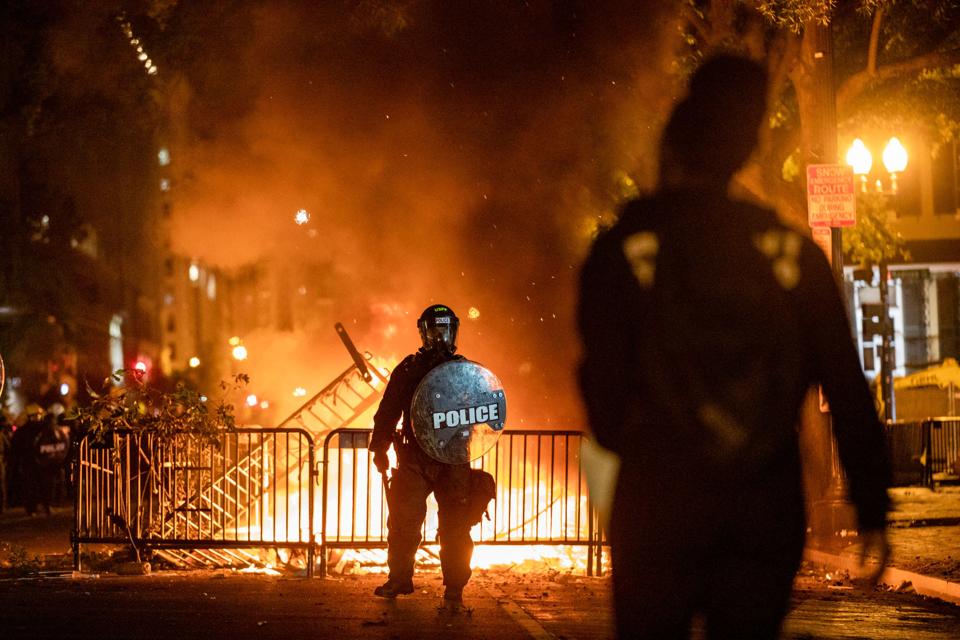 Investors don’t see protests as a threat to either company earnings or an economic recovery, at … [+] least not yet.

The stock market is moving higher on optimism about reopening the economy in spite of a perfect storm of bleak developments including the global coronavirus pandemic, record unemployment numbers and upheaval over racial inequality.

The market’s subdued reaction to widespread protests over the death of George Floyd is “consistent with the very sharp disconnect between markets and the economy,” Mohamed El-Erian, chief economic adviser for Allianz, told the Financial Times.

A crucial factor lifting stocks in 2020 is the unprecedented intervention of the Federal Reserve to support the economy: The Central Bank has injected nearly $3 trillion into financial markets since the end of February.

The Fed has enacted a slew of emergency initiatives including rate cuts, lending programs and credit facilities that are giving investors reassurance the Central Bank will step in to save the financial system if needed.

For instance, the Fed began buying up short-term corporate debt and municipal bonds for the first time ever, promised to buy an unlimited amount of government debt for the duration of the coronavirus crisis and is also launching a main street lending program for small- and medium-sized businesses.

The Fed’s actions have “without question” helped prop up the economy, says Mark Freeman, chief investment officer at Socorro Asset Management. The combination of proactive monetary policy with historic government stimulus efforts has been an “exceptionally powerful force in driving the market.”

Historically, the market tends to look past most civil unrest, with many analysts pointing to precedents like President John F. Kennedy’s 1963 assassination, the 1965 civil rights march in Selma, the 1967 Vietnam War protests, the 1968 assassination of Dr. Martin Luther King Jr. and the 1992 riots sparked by the police beating of Rodney King.

“As painful as this is right now, it hasn’t gotten to the point where it changes the market’s outlook for a recovery—it’s that simple,” says Freeman. The protests are “not viewed as significant from an earnings standpoint, and that’s ultimately what the market comes back to” time and time again. The only way to justify current price levels, he adds, is that “the market isn’t looking at 2020, but instead ahead to 2021 and beyond that.”

The market has pushed through turmoil in recent decades as well, Nicholas Colas, co-founder of DataTrek Research, noted in a report. Stocks still posted gains in 1999 after President Bill Clinton was impeached and in 2011 during Occupy Wall Street protests. “What matters to markets right now is how/when the US economy restarts from COVID Crisis shutdowns,” Colas argues. “If protests or political spillover start to hurt consumer confidence, that would spell lower stock prices.”

If protests continue for longer than expected and cause more economic damage in cities, that could pose a threat to the market’s recent rally, investors say. Not only that, consumer confidence (a key driver of stock market performance) could be pressured by continued civil unrest, warned RBC Capital Markets. Some analysts are also worried about President Trump’s warning that he would send in the military to help quell protests, while others fear that large groups of protestors could lead to a second wave of coronavirus infections. “Not only does the violence and damage to property hinder the reopening of the economy, but it surely also creates a hotbed for renewed infection,” Robert Carnell, head of Asia-Pacific research at ING, told the Times.

Stocks are rallying—even after several days of escalating protests across the country—because the market is blind to social justice, CNBC anchor Jim Cramer said on Monday. “The market has no conscience,” he added. “Investors are simply trying to make money.” That’s just the nature of the stock market, Quincy Krosby, chief market strategist at Prudential Financial, similarly told CNBC. “The market always seems heartless,” he said, adding “The algorithms almost certainly have no shred of empathy.”