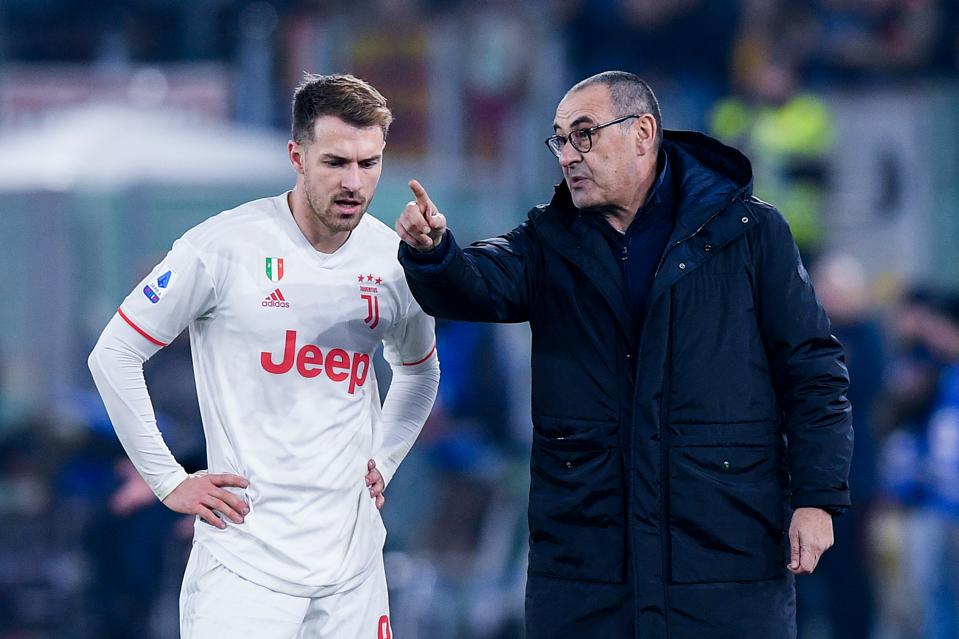 Maurizio Sarri manager of Juventus gives instructions to Aaron Ramsey of Juventus during the Serie A … [+] match between Roma and Juventus at Stadio Olimpico, Rome, Italy on 12 January 2020. (Photo by Giuseppe Maffia/NurPhoto via Getty Images)

Juventus boss Maurizio Sarri was frustrated with his team’s second-half performance, despite his sides 2-1 victory against Roma at the Stadio Olimpico on Sunday night.

The Old Lady returned to the top of Serie A, two points clear of Inter Milan who drew with Atlanta at the San Siro in the earlier kick-off.

Goals from Mehir Demiral and Cristiano Ronaldo on three and 10 minutes respectively, gave Juve the perfect start, but Sarri was left disappointed that his side did not kick on further, and could have done a lot better in the second half.

“We played well for 60 minutes. It was necessary to take into account a little suffering when playing here against a team that has pace, acceleration and technique. It was almost inevitable”, Sarri told Juventus’ official website.

“What I did not like was the management of the result, when instead there were the conditions to do wrong: when we managed to break away in a calm manner, we were three against one on three occasions.”

The 61-year-old highlighted the importance of the victory, given the fact the match was away from home.

“We are happy because we scored three points on a very difficult field, putting in a good performance for good stretches; today we played deep in our area without wanting to go into the opponent’s half of the pitch and that’s a risk.”

Adrien Rabiot and Aaron Ramsey both started the game, with the latter being replaced by Danilo on 69 minutes. Sarri believes both were instrumental for his team. 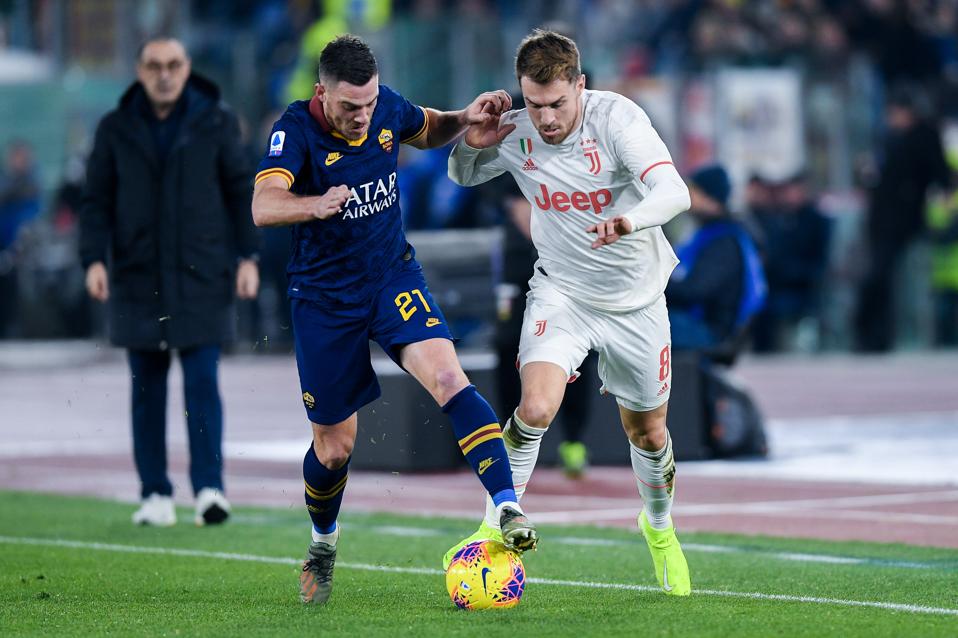 Aaron Ramsey of Juventus is challenged by Jordan Veretout of AS Roma during the Serie A match … [+] between Roma and Juventus at Stadio Olimpico, Rome, Italy on 12 January 2020. (Photo by Giuseppe Maffia/NurPhoto via Getty Images)

“Ramsey and Rabiot are doing well, they give the impression that they are growing each game. Aaron has always scored with insertions, he has them in his DNA: for an Englishman to come and play with us is not easy, and, of course, he had a series of physical problems at the beginning.

“He had to wait and now I like how he is emerging, I am convinced that he will have a great second half campaign, like Rabiot.”

Sarri also believes Leonardo Bonucci and Matthijs de Ligt, who was introduced due to the injury of goalscorer Demiral, were well organised and fitted in seamlessly to the system.

“Today we were good defensively in the final third. I prefer to defend 30 meters ahead, but the situation was the same and I had to adapt by changing the formation in the final minutes.”

The Only One Business Show – The Self-Reliant Entrepreneur

Netflix’s ‘The Witcher’ Plans To End With The Books, Not Branch Into The Games

Tips of the Trade with Seth Godin

WeWork Chiefs Tell Employees They Have An ‘Obligation’...