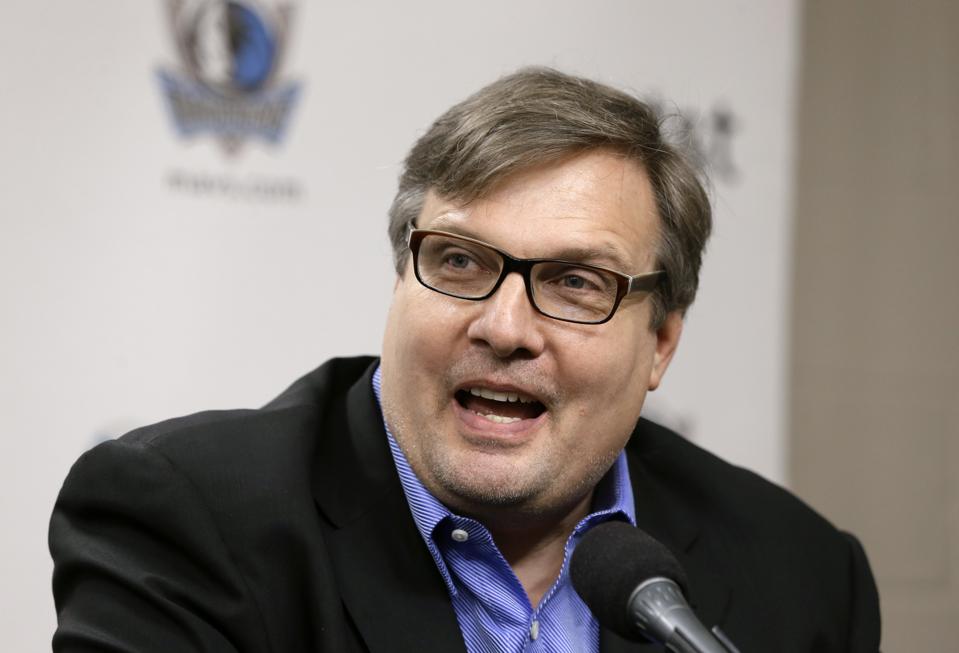 Dallas Mavericks general manager Donnie Nelson makes comments after introducing the NBA basketball … [+] team’s three rookies during a news conference, Wednesday, July 10, 2013, in Dallas. The Mavericks have loaded up at guard in free agency, but they still have a hole at center after missing out on Dwight Howard. Andrew Bynum was set to visit Dallas on Wednesday, the first day signings can become official. (AP Photo/Tony Gutierrez)

The Dallas Mavericks were in the air, flying to Washington D.C., as the NBA’s trade deadline drew near. As the team plane took off from Love Field, General Manager Donnie Nelson was not on board. He stayed behind to work the phones, looking for potential trades. Yet, as the 3 p.m. ET deadline came and went, those calls bore no fruit. The Mavericks landed with their roster unchanged.

“While I don’t think anything is going to happen with us, I don’t know for sure,” Head Coach Rick Carlisle foretold Wednesday night. “I don’t expect that we’re going to do anything. That’s just my personal opinion.”

That Dallas did nothing, not even trading for a second-round pick, may disappoint some. However, it signals that the front office is confident in the group of players it has now with the team positioned to make a playoff berth. While they have faith in the roster, that’s not to say that they couldn’t move a number of assets.

Courtney Lee’s $12.75 million contract is a burden on the team’s payroll. Lee makes the third most money on the roster, behind Kristaps Porzingis and Tim Hardaway Jr., but he barely sees the court. He’s appeared in just 11 games for a total of 92 minutes. Even though Lee has a bloated contract, it expires this summer. That, in theory, would have made it tradeable. Instead, the Mavericks will retain Lee. He’ll come off their books in July.

Dallas also had a lucrative second-round 2020 draft pick to dangle in front of teams hungry to make a deal. It’s the one Golden State owes them. As the Warriors continue to sit in last place in the league, the potential of the pick to be used to trade up into the first-round or hope a first rounder slips through the cracks is apparent. This pick may have been Dallas’ biggest trade chip. Now, it’s theirs to keep.

Finally, the Mavericks were sitting on a pot of cash at the deadline. They still are technically. Dallas has an $11.82 million trade exception that it created after dealing Harrison Barnes to the Sacramento Kings at the trade deadline last season. They could have used it to absorb excess salary in a trade for up to one year after its creation. As it stands, it will expire February 7 unused.

In previous years, the Mavericks have used the trade deadline to their advantage. Last season, they landed Porzingis in a blockbuster and unloaded Barnes’ remaining salary. Nelson saw fit to stand fast this year as nothing materialized for his team. That’s not to say the team doesn’t need some help, especially considering all the injuries its sustained. Nevertheless, Dallas will have to make do with the roster it started the season with as it limps toward the All-Star break.

Does ‘Birds Of Prey’ Have A Post-Credits Scene And Should You Stick Around To See It?

Duterte Is Turning Philippines Into A More Corrupt...

Ten Lessons The Coronavirus Has Taught Us About...