Breaking
Sunday’s Google Doodle Is Actually About Google
Office Of The Comptroller Of The Currency Chief...
Source Code For Multiple Windows Operating Systems Publicly...
Why Forgettable Pfizer Really Is A Great Value...
Hot For The Holidays? Amazon Home Drone, Kid...
Best Small Business Loans
The FAAMG Stocks Drive The Markets
Mall Of America Extends A Hand Of Unity...
Surprise Samsung Galaxy S20 FE Beats Google Pixel...
After Apple And Tesla, Berkshire And Amazon Should...
Is It Wrong To Be Rich In Poor...
‘C&C’ Is 25: How ‘Command & Conquer’ Revolutionized...
Archeologists Vs. Spirit Mediums Exhuming Human Remains In...
Blow To Bitcoin As Portnoy Warns Cryptocurrencies Are...
What an Effective Business Cloud Must Include
5 Ways to Make Running a Business Easier
Home Business Mayor Walks Back Statement Saying Every Person Arrested In Minneapolis Protests Was From Out Of State
BusinessFinance

Melvin Carter, the mayor of Saint Paul, Minnesota, on Saturday said he was wrong when he declared that “every person” arrested in violent Minneapolis protests was from out of state. 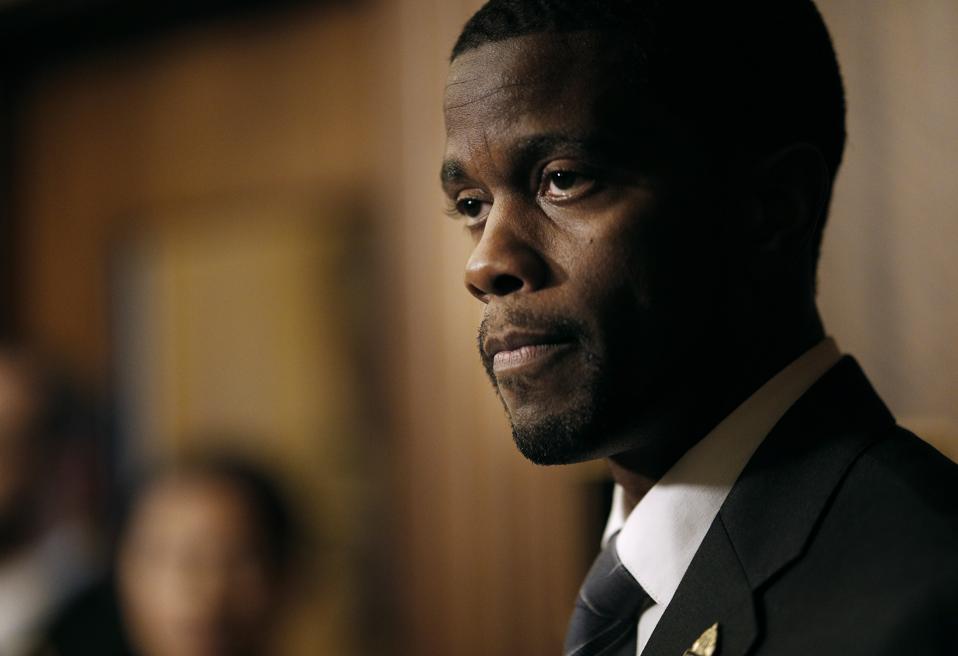 St. Paul Mayor Melvin Carter gave an update on the names of the police officer-involved in the … [+] shooting of William “Billy” Hughes Tuesday August 7, 2018 in St. Paul, MN.

Carter said he was given inaccurate information during a police briefing, which he repeated at a Saturday morning press conference, according to CBS reporter David Begnaud.

The reversal came after a local news outlet KARE 11 examined data from the Hennepin County Jail’s roster and found nearly all the people arrested actually live in Minneapolis or the surrounding metro area.

Carter and other local officials earlier that day sought to paint the chaos in the city as driven by outsiders: “I want to be very, very clear: The people that are doing this are not Minneapolis residents,” Minneapolis Mayor Jacob Frey added. “They are coming in largely from outside of the city, from outside of the region, to prey on everything we have built over the last several decades.”

Minnesota Gov. Tim Walz, who also announced that he would fully mobilize the Minnesota national guard for the first time in 164 years, called the unrest “an organized attempt to destabilize civil society with no regard for civil life or property.”

The dynamic has changed over the last couple days, Walz, Carter and Frey said. Protests gradually shifted from being peaceful on Tuesday, but as more people came from outside of the city, they’ve turned increasingly violent in recent days.

“Our great cities of Minneapolis and Saint Paul are under assault by people who do not share our values, who do not value life and the work that went into this, and certainly who are not here to honor George Floyd,” Walz said. “So if you are on the streets tonight, it is very clear: You are not with us.”

“This is no longer about protesting… This is about violence and we need to make sure that it stops,” Frey said. “We’re in the middle of a pandemic right now.” The protection of citizens and property is the top priority, Walz and Frey confirmed on Saturday. “That situation can be expected to deteriorate further with these people,” Walz said, adding that violent protestors are being fed professional tactics in urban warfare by outside groups.

Should You Start More Than One Startup At The Same Time?