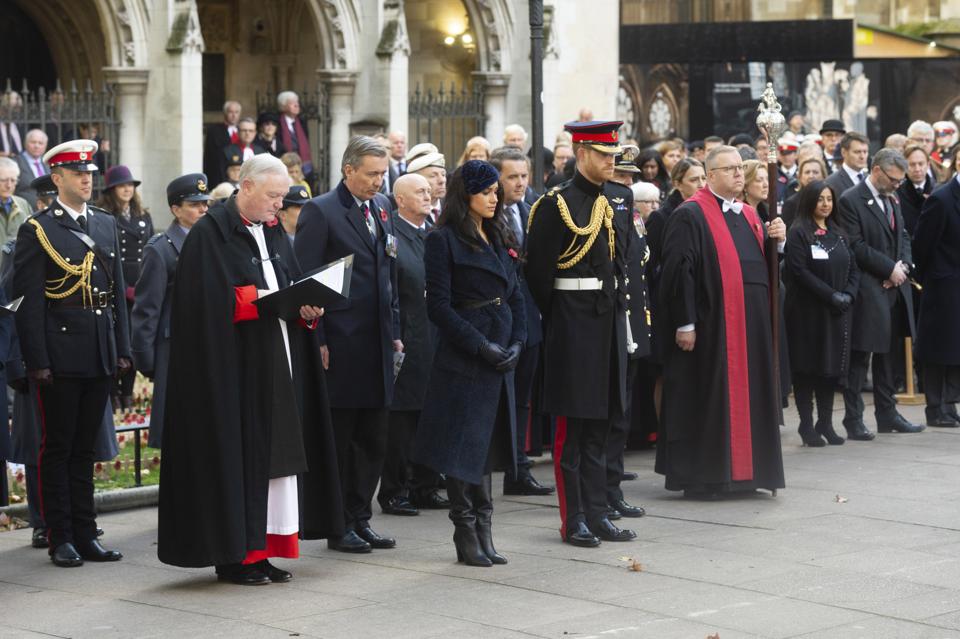 Eight Weeks Prior To Abdication: Prince Harry, Duke of Sussex and Meghan Markle attend the 91st … [+] Field of Remembrance at Westminster Abbey in London, Britain, on Nov. 7, 2019. The Field of Remembrance has been held in the Abbey’s grounds since 1928. This year, hundreds of small crosses bearing poppy petals have been planted in the Field of Remembrance to pay tribute to British servicemen and women who have lost their lives in conflicts. (Photo by Ray Tang/Xinhua via Getty) (Xinhua/ via Getty Images)

As the tectonic shifts under the Pacific create tsunamis, so the conditions of Megxit will make some havoc-wreaking waves, not the least of which crashed yesterday in London with the news that Buckingham Palace has enjoined Prince Harry and Meghan Markle from using their already-trademarked “Sussex Royal” brand. The Palace position is that the couple is, by choice, no longer ‘royal.’ Although Harry and his wife do, officially, retain their HRH titles, the titles are held in abeyance and the couple are forbidden from using them. That policy now extends to their brand.

A decision such as this can only come from the very highest reaches of the monarchy, meaning, from the Queen and Charles. William will likely have been consulted. Essentially, the message for Harry is: You can’t say you don’t want to be royal – especially in the way that you have done it – and then market yourself as royal.

It’s not insurmountable, but it is a pointed commercial blow for the new residents of Canada. It will affect not just the infamous joint Instagram account, although it also does that. The Queen’s move will change every single thing that the couple have trademarked in their once-secret “Megxit laboratory” prior to their sudden announcement of retreat in early January. That will include: clothing (t-shirts, sweaters and the like), books, stationery, china, and what’s being described as ‘teaching materials.’ Their nascent foundation, which was, also, planned to carry the Sussex Royal name, will have to change.

The negotiations with the Queen and the courtiers who have been responsible for the decision have been described as quite “complex,” as well they should be. The nightmare “marketing” precedent for the Queen and Charles is, glaringly, present front and center at every family gathering and can be summed up in two words: Sarah Ferguson. Sarah Ferguson’s constant striving for the — in her limited view — pot of gold, she has led her part of the royal family down what can be fairly described a very rocky road. She was, infamously, trapped in a video sting by an undercover tabloid-newspaper team actually selling access to Prince Andrew. Her shilling for Weight Watchers and her commercial lines of merchandise, which have collapsed, have been more than a simple embarrassment to the Crown. By loosening the leash on Prince Harry and Meghan, the Queen and every courtier working for her and for Charles will be very mindful of the last quarter-century of Ferguson misdeeds.

The basic contradiction in Harry’s posture at the moment is obvious to the lowliest rag-and-bone man in London – which is precisely the Queen’s problem with it. In essence, the couple were saying to the Queen: No, your Majesty, we’ll no longer be visiting the old-age homes in Liverpool or rubbing noses with the Maori for you, it’s far too much stress. But we’ll be keeping the teacup and cookie-tin line going, thank you very much.

We could fairly ask what might the prince and Meghan Markle have been thinking by trademarking their brand as a „royal“ thing while, simultaneously, hatching their plan to be no longer of the rank, but the Megxit tangle has traveled well beyond that question now. It would, also, be reasonable to ask whether the process might be going a bit more smoothly and generously had they not chosen to announce their departure as a fait accompli, without consulting Charles or the Queen. That seems to have been the crucial mistake. It robbed the process in which they are now engaged of generosity, flexibility and mercy, qualities that both Prince Harry and Meghan Markle most need at this precise point in time.

Note to Meghan Markle’s 11,000,000 Instagram followers: You’ll want to get to work on your commemorative selfies with background screenshots of the Sussex Royal Instagram account today, because the thing is just not going to be around much longer.

Digital Asset Steps Up A Gear In Enterprise Blockchain

Too Many Antibiotics Prescribed With No Doctor’s Visit, Study Finds

WWE Is Planning A ‘Braun Strowman’-Like Push For...

Human Spaceflight In 2020: What Lies Ahead

The London Design Studio Making The Most Of...