Home Business Merck Has A Great Future, Because It Has A Soul: Ken Frazier
Business

Merck Has A Great Future, Because It Has A Soul: Ken Frazier

Listen to this conversation I had with with Ken Frazier when we honored him with the first Forbes Healthcare Lifetime Achievement Award last December, and you’ll quickly realize why he is one of the most effective and inspiring big company leaders today and why Merck’s prospects in the pharmaceutical field have never been brighter.

Frazier’s life story would have delighted Abraham Lincoln, who was always thrilled when people from humble backgrounds achieved success through grit and determination. As a youngster, Frazier was fired up to do well and to do good by Thurgood Marshall, the great civil rights lawyer who won the landmark case before the Supreme Court that ended legal school segregation, and by his own father, who raised him and his siblings to work hard, aim high, maintain one’s integrity and, especially, prize education. Thanks to the civil rights movement, Frazier had opportunities that hadn’t been available to his father, who, Frazier points out, would also have been a CEO were it not for racial barriers. 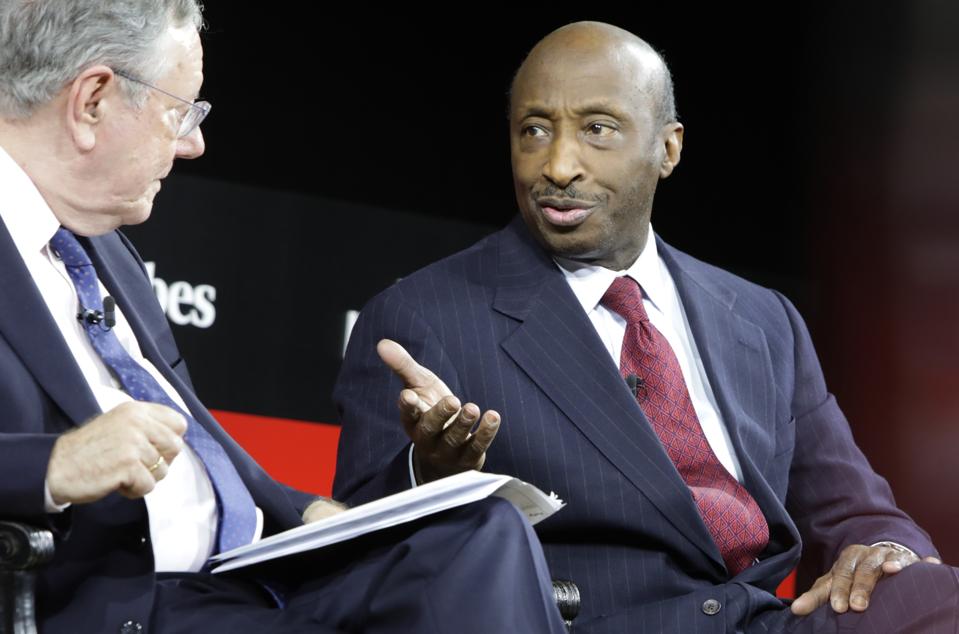 After Frazier graduated from Harvard Law, he joined a firm where he not only served corporate clients well but also engaged in pro bono work, which included winning the freedom of an innocent man who had been wrongly convicted and was on death row.

Frazier’s formidable legal prowess landed him at Merck, where he won renown for refusing to kowtow to frivolous lawsuits. With promotions he also exhibited immense executive capabilities.

Under Frazier’s leadership Merck has done well, and its pipeline of promising new drugs is excellent. More fundamentally, Frazier has enriched an already humane, purposeful culture to alleviate human suffering, and he has Merck working hard on fighting disparities in health outcomes.

What is striking about Ken Frazier is his remarkable and deep sense of humanity.

You will be uplifted and impressed!

The importance of a sense of purpose

“What really attracted me to Merck was the really strong sense of purpose. When I began to talk to people inside the company, I realized that the ethos of pro bono was very much like the ethos of Merck, right? The idea of preserving, extending human life and trying to be equitable, dealing with health disparities is a major part of what Merck is about, in addition to scientific excellence.”

On a company’s soul

“I think it’s unfortunate that corporations have become the whipping boy for people. They’ve created tremendous wealth around the world. If you look at how many people have risen over the past few decades from dire poverty globally, a lot of it is because of private enterprise; it’s because of capitalism. The vehicle through which that happens, generally, is corporations. But what I meant by saying, ‘A company has a soul,’ is that the company is made up of a group of flesh-and-blood people, and those people have a sense of purpose. At Merck, people get up every day in the morning with the desire to alleviate human suffering, and that’s what motivates people. […] The people who worked on Ebola vaccine did not do that because we assigned them full time to that. These were people—our researchers, our manufacturing people, our chemical engineers—they said, ‘We want to do this on top of what we’re doing every day because we see an opportunity to, again, prevent disease, alleviate human suffering.’ So that ethos, that sense of purpose is what I mean by ‘soul.’ And you’ll see that there have been companies that have drifted away from that. And those are the companies that have really gotten into trouble.”

In the U.S. your zip code matters more than your genetic code

“Here, in New York City, an African-American woman is four times more likely to die in childbirth than a white woman. And it doesn’t matter what her status of education is. Right next door in our home state of New Jersey, we’re dead last of the 50 states in terms of racial disparities in women dying. These are things that we need to fix in our country. It’s great that we’ve done the human genome and people’s genetic codes are helping us decide how to treat them, but the reality of the world is [that your] zip code is more determinative of your health in this country right now than your genetic code. And we have to find ways to deal with these health disparities. And I’m very proud that Merck wants to spend its time, its money and its talent on those issues.”

On the narrative fallacy surrounding a CEO

“One of the funny things about being a CEO is what I call the narrative fallacy. When your company does well, everybody says, ‘Look how good that guy is,’ right? The reality of the world is the two things that make the biggest difference is what is the environment in which your company is functioning at a particular point in time. Warren Buffett said, ‘If you take a great manager and put him in a failing business model, always bet on the failing business model,’ right? So it helps if you’re in the right environment. […] But the second thing is it’s the performance of other people that make you successful. And so I just want to say that I’ve been very fortunate to be surrounded by terrific, talented, committed scientists, engineers, and other people inside Merck. And I know it’s the narrative fallacy.”

Six Technology Trends That Will Shape Businesses In 2020