Breaking
Three Essential Components of a Successful Small Business
Pandemic Pet Adoptions Add To Chewy’s Tailwinds, But...
How to Use LinkedIn’s Social Selling Index Like...
Strong Revenue Trend Could Drive EXACT Sciences Corporation...
9 Things To Know Before Starting A Business
‘Game & Watch: The Legend Of Zelda’ Will...
The 9 Fundamental Components Of A Startup Pitch...
How to Get Results from Broken Link Building
Florida Supreme Court Tells The American Bar Association...
How to Write Perfect Paid Social Media Marketing...
How Restaurants Can Design a More Sustainable Food...
Expenses That Small Business Owners Need to Be...
How You Can Make Saying Goodbye To The...
Biden To Meet Royal Family At Cornwall’s Eden...
It’s Going To Be Emotional — Going International...
Peer Mentoring For Students: STEM & Buds
Home Business Messi Genius Decisive: What We Learned From FC Barcelona Versus Atletico Madrid
Business

Messi Genius Decisive: What We Learned From FC Barcelona Versus Atletico Madrid 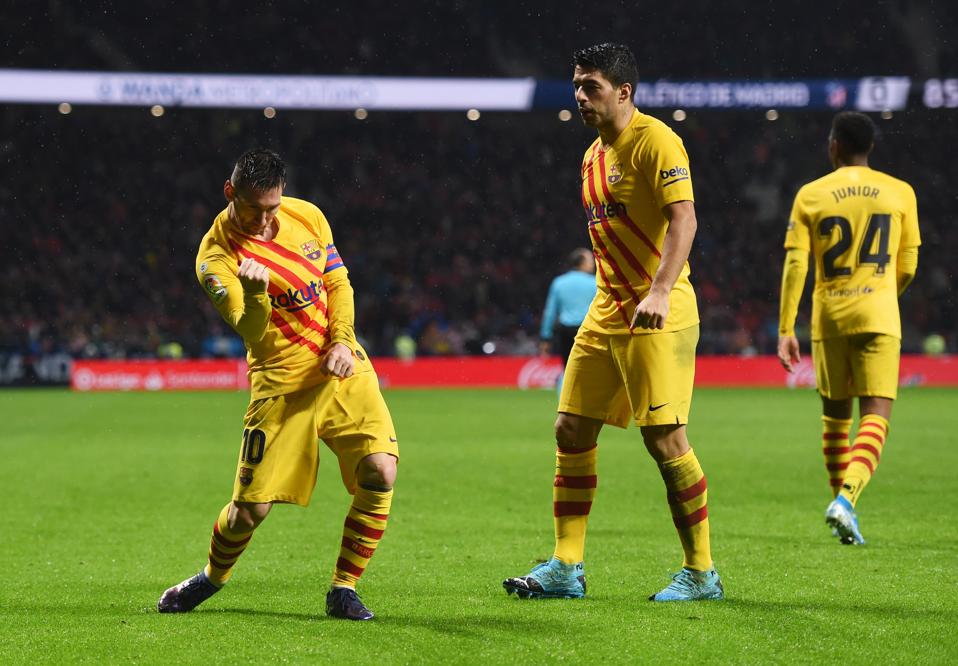 At the conclusion of a nailbiting evening at the Wanda, FC Barcelona made their way back to the top of La Liga thanks to a late moment of genius from Lionel Messi. Here’s what we learned from the tie.

Arthur had done enough to impress Valverde in training

Dropped from the Leganes away squad and only making it as far as the bench for the home encounter with Dortmund in the Champions League midweek, the Brazilian finally returned to the first XI. Forming a three man midfield with a reborn Ivan Rakitic and Frenkie de Jong, this was made possible through Sergio Busquet’s suspension while coming at the expense of Arturo Vidal.

Leaving toy rats on his plaque outside the ground as seen below, the Frenchman has not been forgiven for switching allegiances to Barça after half a decade in Rojiblanco colours. SPORT reported that they chanted “Griezmann, die” during the warm-up and they also booed his name when it was read out over the tannoy for the starting line-ups. In an opening 10 minutes when he did little switching between the flanks, they naturally jeered his every seldom touch.

Junior Firpo looked way out of his depth

On top of dodgy clearances and almost scoring an own goal when hitting the post, he brought Correa down on the edge of the box to give away a dangerous free kick. Then, he was nowhere for João Felix’s cross at the back left post that forced a fantastic save from Ter Stegen when former Espanyol man Hermoso sneaked round the defence and came close to converting. Hurry back, Jordi Alba.

Failing to muster a single shot at goal or anywhere in its general direction, the Blaugrana perked up when Messi robbed the ball on the left flank and knocked it across the box. Suarez’s dummy was genius, but Rakitic should have done far better with the shot hit straight at Jan Oblak in acres of space.

Suarez and Griezmann are really starting to read one another better

Around 10 minutes after the Rakitic sitter, a neat exchange of passes between Griezmann and Suarez led to the latter finding enough room to take a snapping shot that was just wide. Swiftly following this, Griezmann played a lovely pass for Uruguayan in behind himself near the corner flag, and clearly the pair are beginning to understand each other’s runs much better.

The ‘keepers were the real stars of the first half

Oblak tipping Pique’s header onto the bar, both these shotstoppers, arguably the best pair in La Liga if not the world, were forced to make outstanding saves in the few chances there were across a tense opening 45 minutes.

Barcelona picked yellow cards up at will

Messi finally emerged an hour in

Forcing a spill from Oblak that almost dropped nicely for Suarez, the Ballon d’Or hopeful started finding his range with a curling shot an hour in.

Atleti dropped off, and spaces began opening up for the visitors

On one charge ahead, Sergi Roberto broke free and Suarez, just like Rakitic in the first half, should have done better when another dummy, this time from Messi, gave him a free hit. The hosts also on the brink of capitalising on a counter were it not for a clever interception from Pique, finally we had a game with half an hour to spare. Around 70 minutes, Messi embarked on a run forward and Griezmann volleyed just Suarez’s dink over the bar to hisses.

Replacing Arthur in the 73rd minute, it was hoped that Chilean would be a match-winning impact sub as he had been at Leganes last weekend. It must be noted however that the youngster he came on for was impressive here, though, with 90% passing accuracy enjoyed in Atleti’s half.

Pique could be injured

Going down with what appeared to be a knee knock, he was replaced by Samuel Umtiti seven minutes before time after being unable to play through the pain. A worrying development, if it is serious.

Messi was as decisive as ever, when it mattered most

As mentioned doing little for the most part of the match. LM10 cut inside from the right flank to strike a quick 1-2 with Luis Suarez and let rip with the winner straight into the bottom corner in the 86th minute. Oblak was beaten, Barça were on Cloud Nine, and Messi pounded the club crest in the rain as Atleti hearts crumbled.

Barcelona have finally beaten Atleti at the Wanda

It was a case of third time lucky after two 1-1 draws and Simeone’s unwanted streak of never beating them in the Spanish top flight was again prolonged.

And they are now back to the top of La Liga

Finishing yesterday in second place thanks to Real Madrid’s win over Alves, FC Barcelona dropped to third a point behind Sevilla when looking capable of only picking a point up in the capital.

With Messi’s moment of genius however, they are back in pole position with a goal difference of +1 over their bitter rivals. El Clasico on December 18th becomes more moutwatering each passing week.

How Much Is That Warhol On The Website? Artsy Survey Shows Price Transparency Drives Online Art Sales