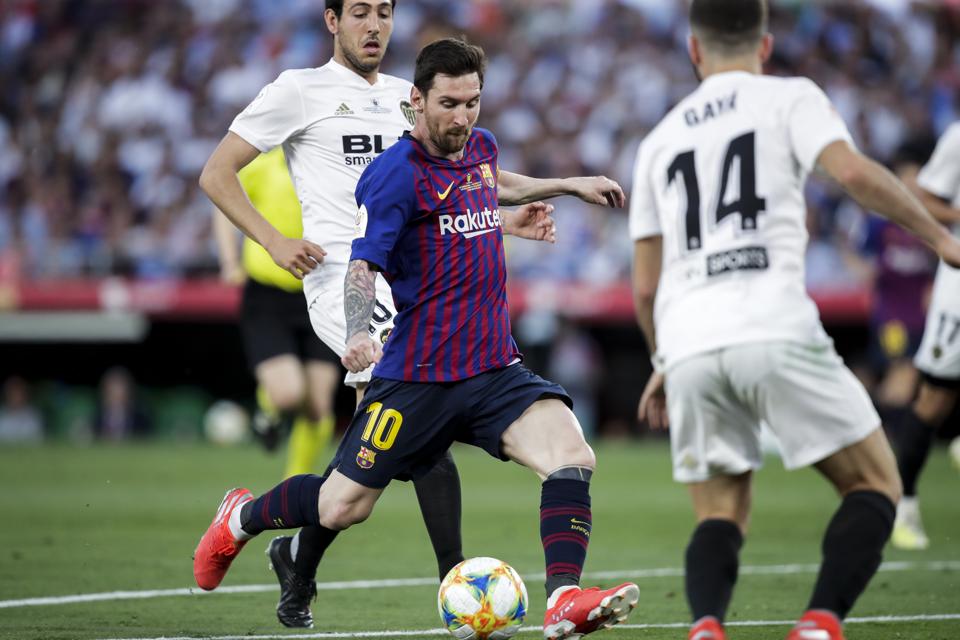 SEVILLIA, SPAIN – MAY 25: Lionel Messi of FC Barcelona during the Spanish Copa del Rey match … [+] between FC Barcelona v Valencia at the Benito Villamarin Stadium on May 25, 2019 in Sevillia Spain (Photo by David S. Bustamante/Soccrates/Getty Images)

Lionel Messi, Gerard Pique and Sergio Busquets have returned to the FC Barcelona first team squad and will travel to the Mestella to face Valencia on Saturday in La Liga.

Level on points with Real Madrid at the top and leading by a mere +2 goal difference, the Blaugrana are charged with winning convincingly after 1-0 and 1-2 scrapes over Granada and Ibiza respectively.

Both those encounters saw them enjoying an astounding amount of possession and passes under new coach Quique Setien when compared to predecessor Ernesto Valverde, but chances and therefore goals have been scarce.

Against the Balearic isle opposition midweek, Barça trailed 0-1 until the 72nd minute and only managed their first shot five minutes prior to that.

Falling badly when knocked to the ground in the second half of that tie, goalkeeper Neto is replaced by Iñaki Peña as Ter Stegen’s substitute on the 18-man shortlist released on Friday evening.

Aside from the German international between the sticks, how the rest of Setien’s men will line up is a matter of intrigue.

Mundo Deportivo had believed a 3-5-2 would be put out, which would mean three centre backs in Gerard Pique, Clement Lenglet and Samuel Umtiti starting while left-back Jordi Alba mans the left flank and Sergi Roberto the right.

In the 61-year-old’s maiden outing in the Camp Nou hotseat however, Roberto was placed on the back line while 17-year-old La Masia sensation Ansu Fati played in front of him on the wing.

A midfield three of Busquets as pivot behind Arturo Vidal and Frenkie de Jong, returning from suspension, is expected with Brazilian Arthur available but still regaining fitness as Ivan Rakitic is dropped.

Up top, Lionel Messi acts as false ‘9’ with support from Copa del Rey two-goal hero Antoine Griezmann. Unless Setien throws a curve ball and opts for a 3-4-3 that is, with the World Cup winner finally becoming the central target man with Fati to his left and Messi to his right. In their print edition on Saturday morning, though, MD have tipped the classic 4-3-3.

Alongside Neto, plus known absentees Ousmane Dembélé and Luis Suarez, Riqui Puig is a surprise omission due to contracting an illness and therefore paves the way for B team promise Alex Collado.

Unbeaten at this iconic stadium in 12 years, history stands in Barça’s favour. There are of course their road woes in 2019/2020 to consider however, which have seen them claim just 15 out of a possible 30 points thus far away from home.

“It will be a high level game,” Setien vowed at his prematch press conference. “We may have the possibility of doing more damage because they have the capacity to attack you and we will try to take advantage of those spaces, which will be more than in previous games,” it was added.

On whether this will be his biggest test thus far, Setien answered: “My first big test was already the day of the Granada match and Ibiza was the second biggest test. And I don’t expect [anything] less from this match that comes now. Barça hasn’t lost at Valencia for many years. But of course the opposition as an entity are perhaps one of the best teams you can face. You pass exams every day [in this job],” he concluded.

Memorably losing the Copa del Rey cup final to the hosts in 2019, Barça avenged the defeat with a 5-2 thumping administered at the Camp Nou in September.

Meanwhile, in the search for a Suarez stand-in, negotiations are underway to take Rodrigo on loan with a view to signing him permanently in the summer, and the Brazil-born Spain international could feature against his potential suitors here.

Need Some Good News? How About A Potential...

Keep An Eye On K’Andre Miller, He May...