Breaking
How commercial storage can help you keep your...
Great Ways to Get Your Workers Involved in...
How online casinos have changed over the years
Is Your Office as Eco-Friendly as You Think?
Hair Extensions – What you should know about...
How to Create a Successful Career in Business
Don’t miss out on a seasonal marketing boost
What happens if your employee is injured at...
How Does A Virtual Business Address Work? Everything...
Introducing Direct.Me the new Link In Bio service
Cryptocurrency for Beginners
Learn How To Build Your Wealth In 2022...
How to choose the right accounting package for...
How Useful is a DBA?
How To Look After Your Finances During A...
What to Look for When Buying a Laptop...
Home Sport Mesut Ozil Shows Emery And Arsenal What They Have Been Missing In Astonishing Cup Game Vs. Liverpool
Sport

Mesut Ozil Shows Emery And Arsenal What They Have Been Missing In Astonishing Cup Game Vs. Liverpool 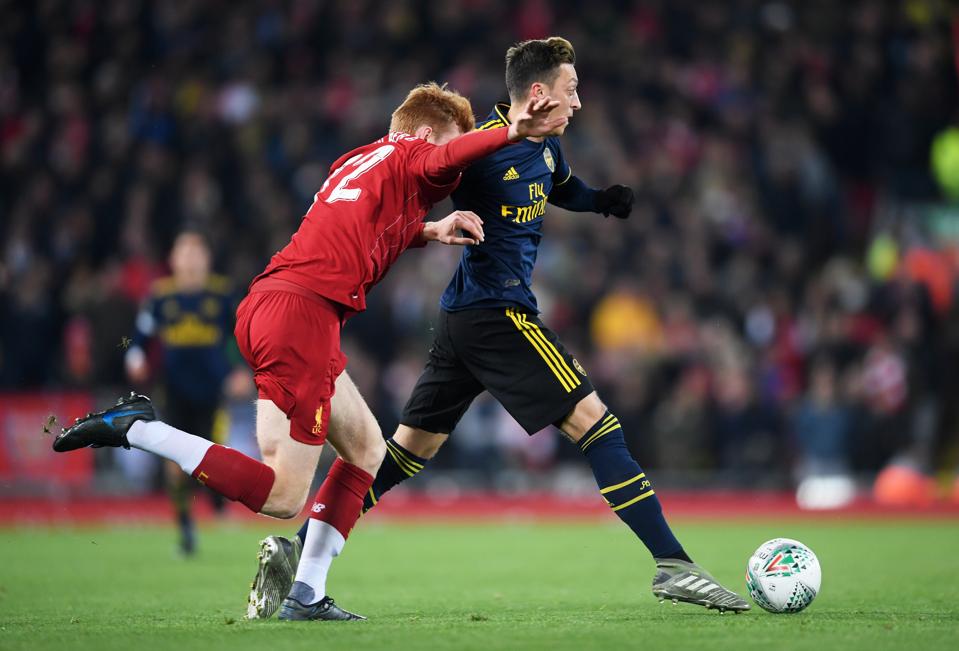 LIVERPOOL, ENGLAND – OCTOBER 30: Mesut Ozil of Arsenal is challenged by Sepp Van Den Berg of … [+] Liverpool during the Carabao Cup Round of 16 match between Liverpool and Arsenal at Anfield on October 30, 2019 in Liverpool, England. (Photo by Laurence Griffiths/Getty Images)

Arsenal fans are not short of subjects to discuss. Xhaka’s sweary outburst on Sunday; the reported interest of José Mourinho in taking over as manager if Unai Emery is dismissed; the rise and rise of young Brazilian Gabriel Martinelli. If not entirely positive, these are at least compelling times in the red half of north London.

Yet even through all the noise, there is one issue that has continuously grabbed headlines, filled column inches and inspired hours of debate on television, podcasts and social media: the ostracism of Mesut Ozil.

Before Wednesday’s League Cup game against Liverpool, Arsenal’s $450,000-a-week midfielder had only made two appearances this season. In the meantime, Emery had tried starting a number of players in Ozil’s position behind the central striker, with none of Joe Willock, Dani Ceballos or Lucas Torreira convincing in the role.

But, in a truly spectacular 5-5 draw at Anfield, the Gunners’ No.10 came back into the team with a bang. His display showed Emery and Arsenal what they had been missing, highlighted Ozil’s incredible ability as well as proving that he is ready to battle to stay at the club.

Asked about the 31-year-old in his press conference on the eve of the game, Emery had indicated that Ozil was likely to get a rare chance. “We need his quality, his skill,” the Spaniard said, “We need his consistency. We need his positive mentality. Then we need him to help us on the pitch.”

And oh, how Ozil answered that call.

In the first half, he was head and shoulders the best player on the field. The German floated around beautifully, finding pockets of space between the home side’s defense and attack, flicking off intelligent passes. When Arsenal was out of possession he hounded the Liverpool defenders in an effort to win it back – something for which he has never been renowned. 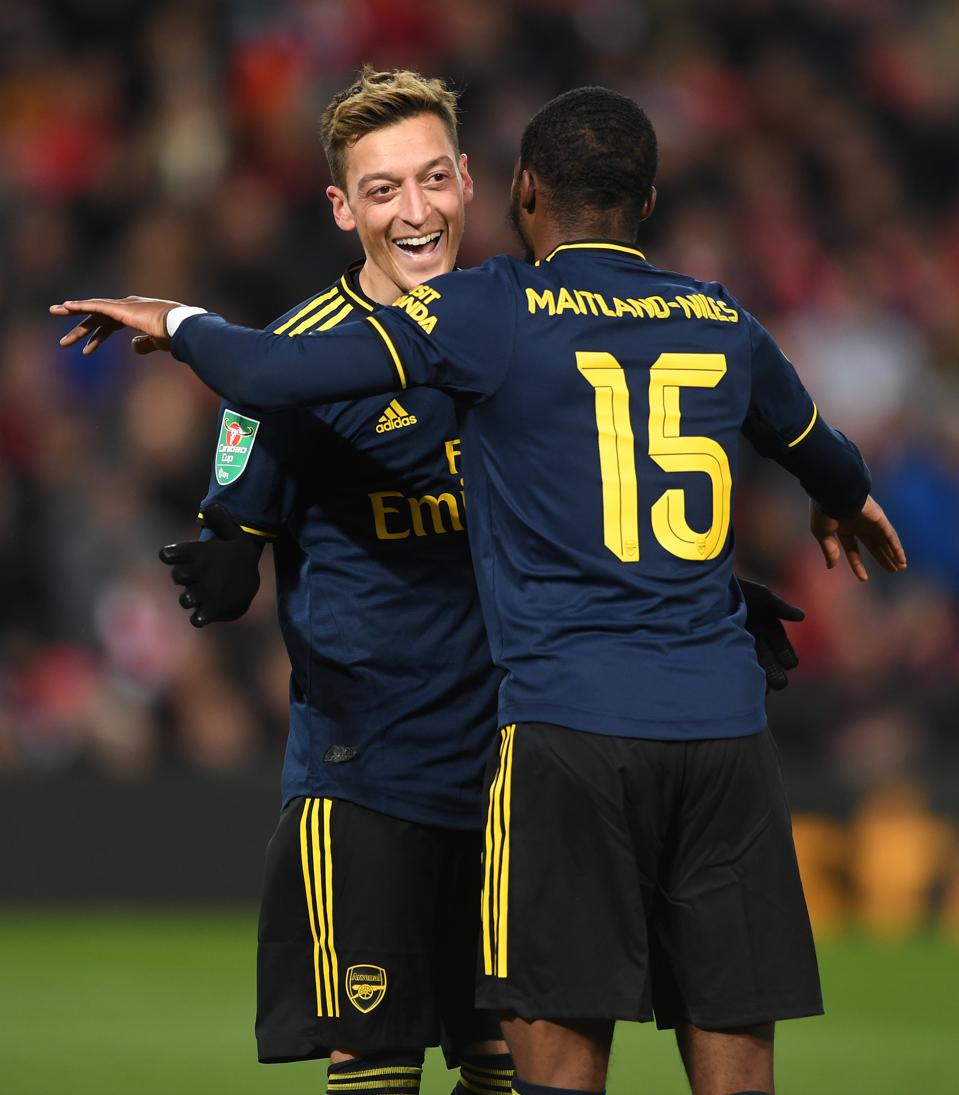 LIVERPOOL, ENGLAND – OCTOBER 30: Mesut Ozil celebrates Arsenal’s 4th goal with goalscorer Ainsley … [+] Maitland-Niles during the Carabao Cup Round of 16 match between Liverpool and Arsenal at Anfield on October 30, 2019 in Liverpool, England. (Photo by David Price/Arsenal FC via Getty Images)

Ozil played an instrumental role in the first Arsenal goal, first finding Ainsely Maitland-Niles with an incisive pass before getting the ball back and caressing it into the path of Bukayo Saka. It was from Saka’s shot, poorly parried by Liverpool’s young goalkeeper Caoimhin Kelleher, that Lucas Torreira poked the ball over the line to draw Arsenal level.

Then, for Martinelli’s second and Arsenal’s third of the night, Ozil was even more impressive. Pressing high up, he simultaneously cut out a wayward ball from Harvey Elliott and, with his first touch, played a wonderful reverse pass to Bukayo Saka. Saka saw the young Brazilian free in the middle of the area and played a fine cross for him to finish.

That example of closing down was not a one-off either, demonstrating that Ozil, often questioned for his work-rate, is ready to fight to win back his place. Just before halftime, he was back in his own half, picking Adam Lallana’s pocket to set up a counter attack from which Arsenal won a corner and created another goal-scoring opportunity for Martinelli.

After the break, Ozil continued to display a similar combination of intensity and ability. For their fourth, Arsenal’s high press paid off again. This time it was Maitland-Niles turn to rob the ball, nipping onto a weak backpass from James Milner. Ozil was right up there with him and, knowing the angle was too tight to shoot when the ball ran his way, he played a wonderful backheel pass to give Maitland-Niles the easiest of chances. The way the pair celebrated with the traveling supporters told you how much it meant.

Ozil was withdrawn by Emery soon after – owing to his lack of match fitness – with Arsenal looking to hold onto their lead. They could not quite do so, conceding a late equalizer before painfully losing on penalties, but Ozil had shown enough in an hour of play to prove how important he can be in knitting together a team that has often appeared disjointed and shapeless this season.

The question now is: what comes next? When a player of such pedigree makes a case as compelling as the one Ozil did on Wednesday night, surely the manager has to give in to the demands of the fans and hand him more chances to shine.

Arsenal now face a run of six games in 30 days, starting with Wolverhapmton Wanderers at home on Saturday. There will, then, be plenty of opportunities for Emery to include the 31-year-old in the team, even if he is not fit enough to start all of those fixtures.

Arsenal’s Spanish manager has a very, very long way if he is to convince Arsenal fans that he is the right man to carry the club forward. But bringing Ozil back into the fold could be a first small step in that direction.