Breaking
How To Delegate Effectively
Stock Market: Two New Trends Shaping Next Buying...
Apple iOS 14.0.1 Release: Should You Upgrade?
Social Media Marketing Consulting
What You Need To Know About Your Startup...
Governor Signs Landmark Student Loan Borrower Protection Bill...
Reddit Co-Founder Alexis Ohanian Plans $150 Million Investment...
This Week In XR: Enterprise Adoption And Financing...
The Disadvantages Of Aging In Place
How Advances In Customer Service Can Take Telehealth...
5 Reasons Why Your Startup Needs To Be...
Beyond-Professional: What Is The New Workplace Normal?
Manufacturing In The U.S. Is On The Cusp...
After 75% Rally, Johnson Controls Stock Looks Fully...
The Future Is Now: This Start-Up Offers Carbon-Free...
Eight Boxes To Check If You Want To...
Home Business Miami Stays Dominant When They Should To Maintain Success
Business

Miami Stays Dominant When They Should To Maintain Success 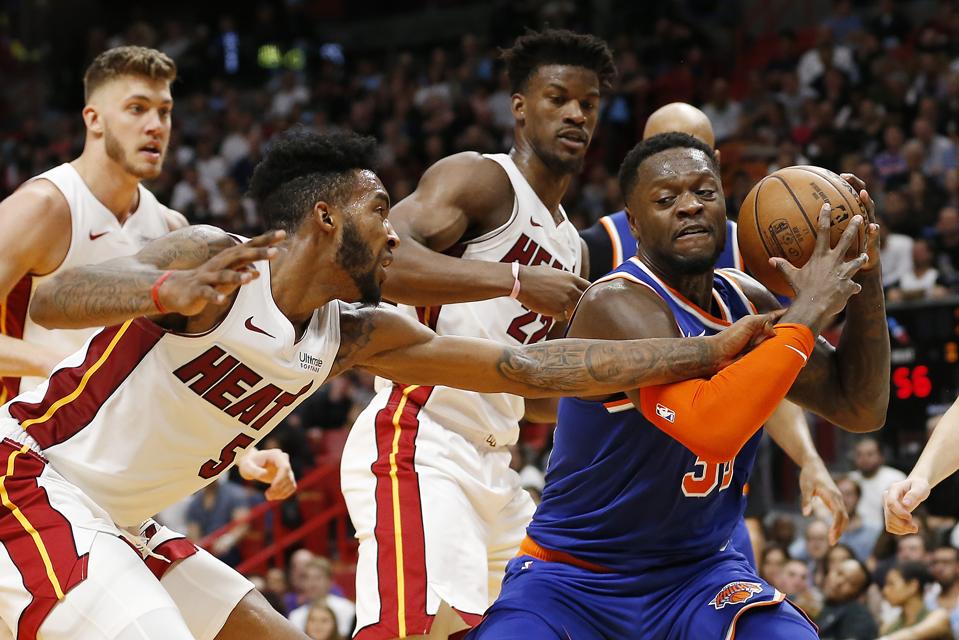 MIAMI, FLORIDA – DECEMBER 20: Julius Randle #30 of the New York Knicks battles for a rebound with … [+] Derrick Jones Jr. #5 of the Miami Heat during the first half at American Airlines Arena on December 20, 2019 in Miami, Florida. NOTE TO USER: User expressly acknowledges and agrees that, by downloading and/or using this photograph, user is consenting to the terms and conditions of the Getty Images License Agreement. (Photo by Michael Reaves/Getty Images)

The 2019-20 version of the Miami Heat is a different team than the one we have seen in recent years for a number of reasons. There’s Jimmy Butler, a star in his prime, and Bam Adebayo, a star on the rise, both of which have been absent from the roster for some time. The playmaking and shooting, too, are welcome additions to an offense that had often been more stagnant than electric.

But, perhaps most importantly, the Heat are beating up on the teams they’re supposed to.

It must sound fundamental, the idea that good teams should find ways to win over bad teams and yet Miami had always seemed to struggle in that regard in recent seasons. In 2018-19, the Heat finished at 22-14 against teams with a record below .500. The year before that they were 24-14. During the 2016-17 season, they went just 20-16

So far this season, the Heat are 15-2 against teams with losing records. [Note: Even this statistic can be debated in Miami’s favor. On October 27, the Heat lost to the Minnesota Timberwolves, on the second night of a back-to-back set, when the Wolves were 2-0. They are currently seven games below .500]

Miami suffered their most egregious loss of the season on December 16 to the Memphis Grizzlies, currently 10-19 and near the bottom of the Western Conference standings. The Heat had previously defeated the Dallas Mavericks two days before facing the Grizzlies, with a rematch versus the Philadelphis 76ers looming just two days later. Overlooking Memphis cost them badly, giving up 118 points on 48.8% shooting, and looking outclassed by a team in the midst of a rebuilding effort around rookie Ja Morant, who scored 20 points on 9-of-14 shooting in the win over the sluggish Heat.

“They punched us in the face,” said Erik Spoelstra on Friday night about the Grizzlies loss. His team was minutes away from facing the 7-21 New York Knicks, and Spoelstra was drawing comparisons between the Grizzlies loss and the upcoming matchup. “The objective is to play your best basketball and win,” said Spoelstra about competing against teams with losing records. “You’re not always going to dominate. If you’re trying to look for a knockout punch early, or shortcuts to the process, to our game, then you’re asking for trouble. But this is very similar to what we were dealing with five days ago [against Memphis] coming off a great win, an emotional win, in Dallas. Playing against a team that won three out of four. And here we are, just a few days later, and it looks pretty similar, doesn’t it?”

The Knicks had won three of their previous four games much like the Grizzlies did before facing Miami. And the Heat dismantled the Sixers just two days before, an emotional high that could lead to a trap against a struggling opponent. “We better bring it,” said Spoelstra.

Bring it, they did, in a lopsided 129-114 victory that did not ever feel particularly close. The Heat shot a blistering 56% versus the Knicks’ porous defense, including 47.4% from 3-point range. The Knickerbockers are hardly a NBA powerhouse, despite their recent pseudo-surge. But previous Miami teams might have disregarded the Knicks and would up losing. This year’s team doesn’t take any team, especially the bad ones, for granted.

“This group has shown an ability to learn from previous experiences and that was something that we wanted to be intentional about is treating the New York Knicks with proper respect,” said a relieved Spoelstra during his postgame press conference. “They’ve been playing well and you can’t assume anything or feel like you’re entitled to anything in this league. There are crazy scores that happen all the time. We faced a Memphis team that knocked us in the face and we wanted to learn from that. I was encouraged by the approach overall.”

The approach, according to starting center Meyers Leonard, was one that indicates growth. Leonard sees, in his first year with Miami, that this team is deep with talent and a well-rounded group of scorers, playmakers and defensive-minded individuals. “We pretty much have every piece of the puzzle,” said Leonard in a lighthearted locker room after the Knicks blowout. Moreover, according to him, the Grizzlies loss proved to be a much-needed wakeup call.

“This is going to sound a little crazy but the Memphis loss was actually good for us,” he explained. “Long story short, we had a very detailed and important film session and meeting as a team, to dial some simple things in, and it showed against Philly. And it showed tonight. We have a very talented team. The reason I bring that up is because sometimes you have to go through something just to learn from it. Was [the Grizzlies game] a loss? Yes, but it’s a learning experience.”

Of utter importance, added Leonard, is to dictate terms early, especially against struggling teams like the Knicks. “When you’re playing a young team, the biggest key is not really about them but about you. Stay disciplined. Stay true to your principles. Share the ball. Lock in on the defensive end. And finish possessions. And I think for the vast majority of that game, we did a very, very good job of staying focused and taking care of a team – at home – that we should.”

While certainly not airtight proof, consider that, last season, the best record against sub-.500 teams wasn’t achieved by the Milwaukee Bucks, the team that had the best overall regular-season record and is poised to do so again this year. The Bucks finished 32-9 against “bad” teams. The team that posted a record of 36-4, the best in this particular statistic?

“Young teams are easy to beat when you stay disciplined and it’s just that simple,” said Leonard sternly. Maintaining the team’s identity against any opponent, and especially against weaker ones, is a benchmark of success. It’s what separates this year’s Heat team, quickly emerging as a surprising – and legitimate – challenger in the Eastern Conference, from previous versions that lost all-too-frequently to cellar-dwelling franchises around the league. “You have to put your foot down and let them know, tonight is not the night. We’re going to take care of business.”