Breaking
Employers: Eight Red Flags You May Not Notice...
Ted Lasso, Other Apple TV+ Shows Arriving Soon...
What Are Working Capital Loans and When Should...
The 10 Biggest Trends in Entrepreneurship to Look...
Clubhouse Has Grown 10X In Two Months. Here’s...
Here’s Why Tyson Foods Stock Looks Undervalued At...
How To Maintain Client Relationships During Long Projects
WhatsApp Is Pushing Ahead With Its Controversial Privacy...
Australia In Talks With Facebook’s Zuckerberg Over ‘Outrageous’...
What To Expect From Deere Stock In Q1?
GME Saga Dissected In The House Committee On...
What’s Next After Mars? The 8 Spectacular Space...
Integrating Life Insurance With Lifetime Income – Part...
How To Invest Your Time Wisely In The...
Spring Forward With These Smart Home Gift Ideas
Hybrid Electric Aviation Pioneer Ampaire To Be Acquired...
Home Business Michelin-Starred Chef Mike Bagale On His Beginnings And Life After Alinea
Business 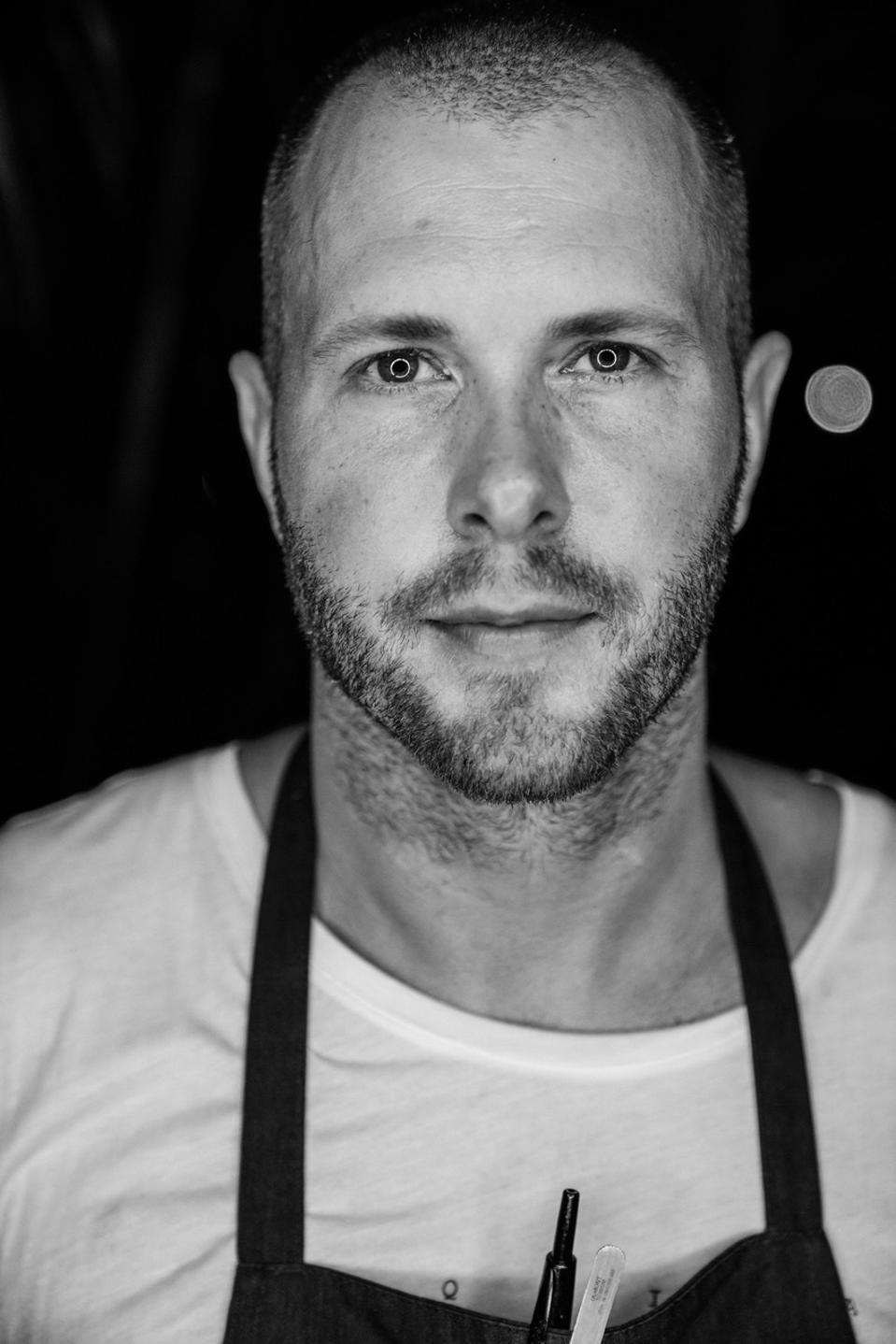 As a teen, Mike Bagale wanted to become a film director. “I enjoyed writing, drawing storyboards, and making home movies,” he says. So after graduation, he enrolled part time at Ryerson University in Toronto, finishing with a certificate in film communications.

But when he returned to the United States, he struggled to find a job. In order to make ends meet, at the recommendation of a friend, he applied to work as a cook at the Four Seasons Hotel in Palm Beach. “I was surprised that with my lack of real cooking experience, I was hired,” he confesses.

Though at the time he had little knowledge in the kitchen, Bagale had always possessed a passion for food. Growing up in Texas, he’d eaten simply as a kid—“my dad worked a lot, and going out was typically reserved for special occasions,” he says—but even at an early age, he had an adventurous palate. “I would eat anything, and when we went out to restaurants I made an effort to always order something that I had never tasted before,” he recalls. “This desire for discovery was a huge catalyst for my appreciation for food.”

When he was five or six, his father took him to a bakery in New Orleans’ French Quarter. “It was my first exposure to proper sourdough and room-temperature butter,” he says. High-quality bread and butter, he insists, “exposed me to everything I needed to become obsessed with cooking,” from texture, technique, and aroma to flavor and terroir. 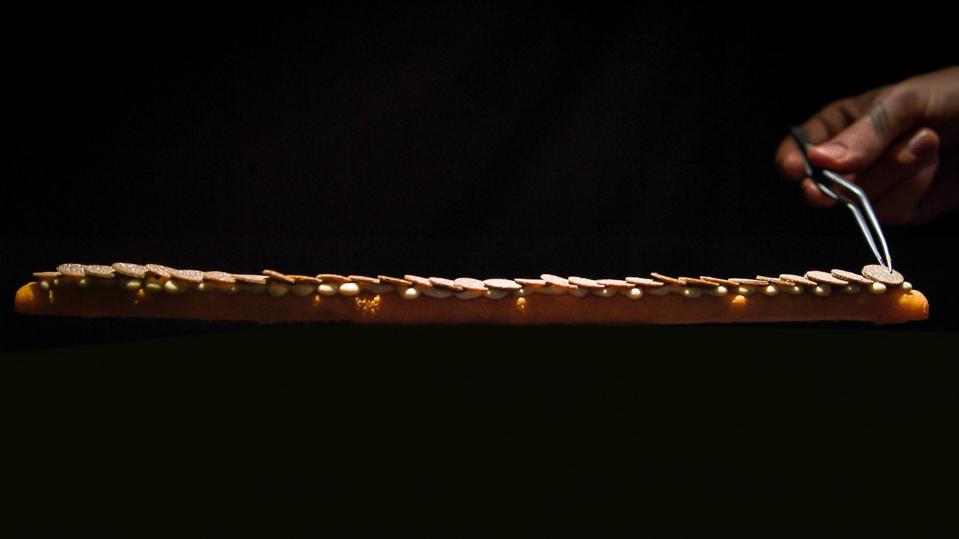 At the Four Seasons, Bagale began in the banquet kitchen, preparing meals for 350 guests for breakfast, lunch, and dinner. “I worked 16-hour days, often for weeks at a time,” he says. “I just kept my head down and worked on improving constantly.” On his days off, he would buy and read used cookbooks. Among his most-thumbed titles were Michel Bras’ Essential Cuisine, Marco Pierre White’s White Heat, Michel Roux’s Sauces, and Rick Stein’s Complete Seafood.

A year and a half later he transferred to the resort’s award-winning restaurant as a full-fledged cook, going on to complete stints at the hotel brand’s locations in Washington, D.C. and Miami. Eventually he was promoted to chef de cuisine at Palm Beach, which put him in charge of all of the hotel’s restaurants and culinary offerings.

Then in 2009, after four years at the Four Seasons, he made a big move. Following a rigorous two-day tryout, he was invited to join the culinary team at Alinea—a restaurant in Chicago specializing in molecular gastronomy, helmed by chef-owner Grant Achatz. 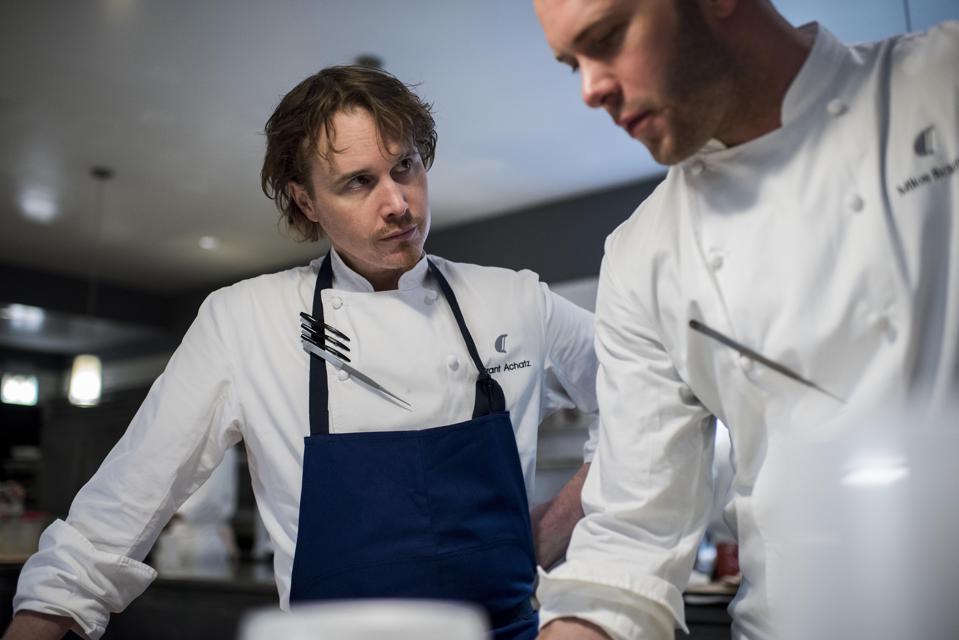 Bagale had always enjoyed experimenting with avant-garde techniques—“I really love playing with textures, and people who know my cuisine know that I try not only to tell a story with the dishes, but to create textures that are relatively uncanny,” he explains—and the new role granted him immense creative freedom in the kitchen.

A year after Bagale joined Alinea, the restaurant was awarded three Michelin stars (a distinction it has held every year since). It was there that he came up with his most famous creation: the edible balloon. “I wanted to make small edible bubbles float—like the ones I saw in Willy Wonka and the Chocolate Factory,” he reveals. “The scene where Charlie was floating in the bubbles has always been one of my favorite scenes in movie history.” 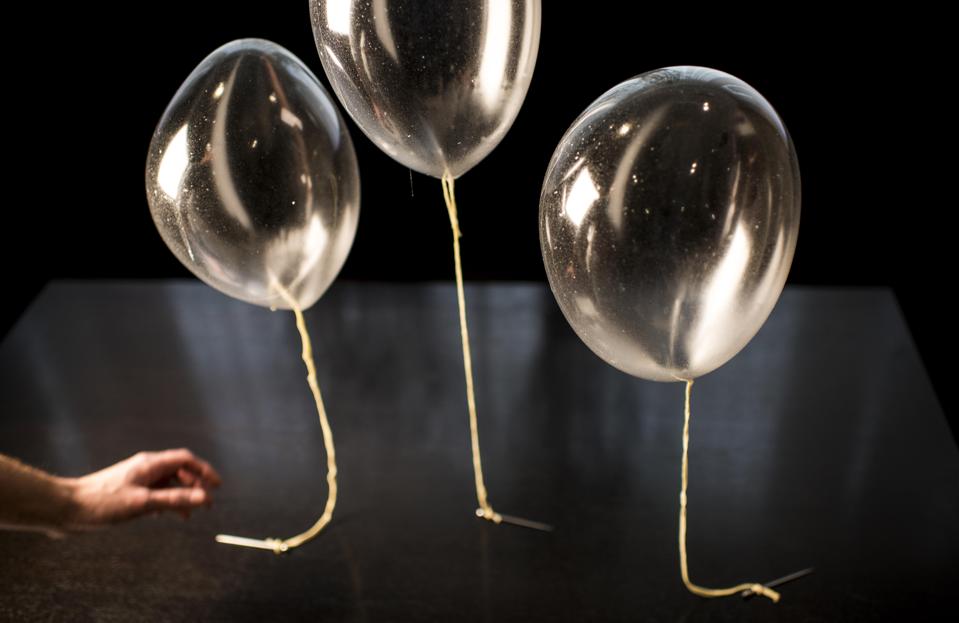 Bagale’s helium-filled edible balloons are made with inverted sugar syrup, a mixture of glucose and … [+] fructose, and natural fruit essences.

The first time Bagale tried to create the buoyant dessert, he filled it with hydrogen. “Realizing that I was playing with a potential bomb, I switched to helium,” he laughs. “It took about two weeks for me to work out the first recipe—no more than thirty hours total.” The green apple taffy balloons were a hit, quickly becoming Alinea’s most famous offering.

Not all of Bagale’s culinary experiments, however, have gone as smoothly. In 2011, after returning from a research trip to Tokyo, he decided to put a dish on the restaurant’s menu that was “essentially a pile of binchotan [Japanese charcoal] that we set on fire and allowed to burn, filling the room with the wonderful smell of white oak,” he recalls. “When the fire dissipated, the service team would approach the table and reveal a hidden surprise underneath the coals: a piece of wagyu cured and wrapped in braised kombu [kelp] that was slowly cooking under the fire.”

The first time he presented the dish, however, a piece of binchotan exploded due to the moisture trapped inside. “Luckily, the guest was not injured, and I quickly learned that I needed to dry the charcoal overnight in an oven to remove all moisture,” he says. “After that, the dish was a huge success.”

Bagale left Alinea in 2018—“I felt like I’d given that restaurant everything I had,” he says—and launched a culinary consulting firm, Super Food Concepts, soon after. He’s been traveling nonstop ever since, teaming up with various brands all over the world, from Montreal to Mumbai. 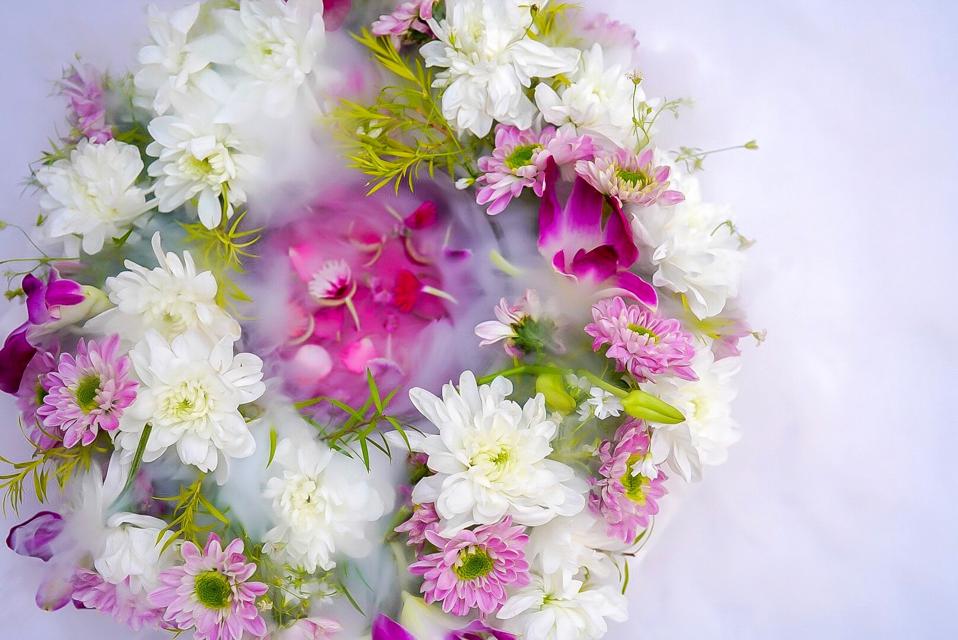 For his collaboration with BMW in India, Bagale prepared a cherry blossom dish with citrus-cured … [+] hamachi, young ginger, and myoga.

Collaborations include one with BMW (which took him to five different cities in India) and a project with Sakara (which involved developing plant-based meals for the New York-based wellness company). He also lived in Hong Kong for a few months while working on a partnership with Vogue, for which he created an artistic experience with food and lighting to complement a gallery exhibit showcasing the magazine’s most iconic fashion photographers.

“Through Super Food Concepts, I am especially interested in collaborating with other artists and brands not necessarily in the food industry,” he says. “It’s through these types of partnerships that I can be creative in new ways—which aligns with the brand I believe I have created for myself.” 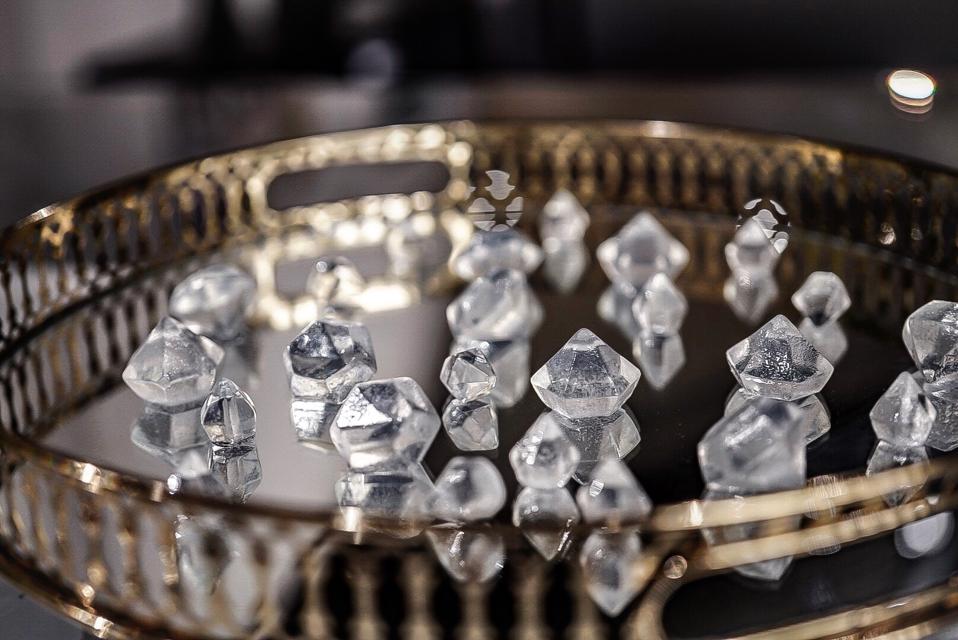 For Vogue, Bagale created piña colada-flavored “diamonds” made from the distillation of pineapple … [+] and lime combined with coconut milk and rum.

On the road, Bagale—whose favorite destinations are Tokyo, Hong Kong, and Mexico City—fervently seeks out new cooking techniques and cultures. In the past year alone, he’s studied bread-making techniques in India, wok cookery and fermentation in China, and the art of nixtamalization (an ancient method of preparing maize) in Mexico—and has ventured to more than a dozen other cities (including Madrid, Prague, Padua, and Santorini) purely for the sake of research. 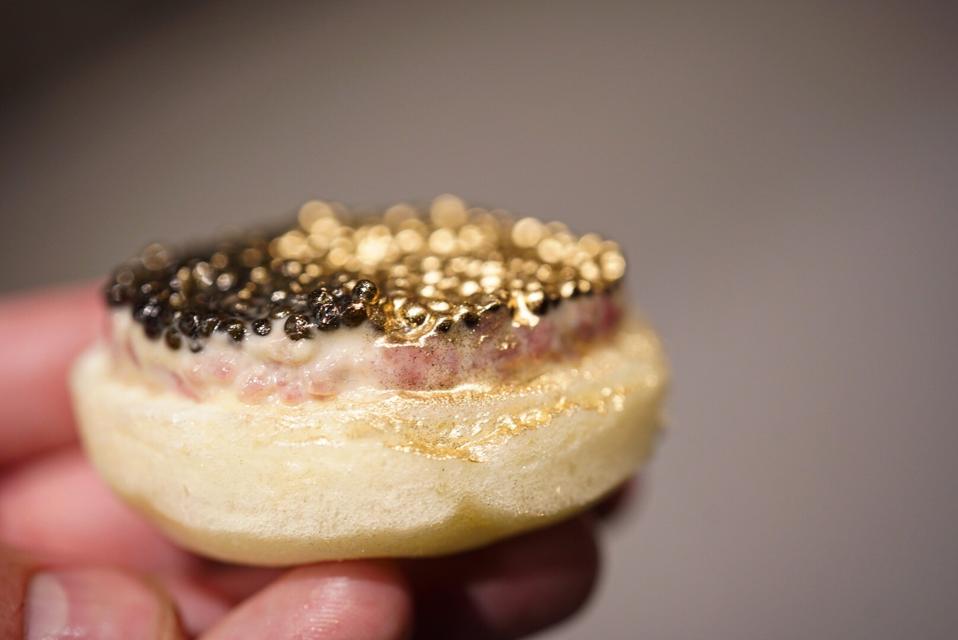 The chef served a wagyu tartare bao topped with Osetra caviar for a recent partnership in Dubai.

For now, the 38-year-old chef—who recently married food writer Kat Odell—seems to be enjoying the nomadic life. But that stands to change later this year, when he plans on launching a new restaurant in a yet-to-be-determined location (likely in Brooklyn or Los Angeles). He remains mum about the budding concept, only going as far as to say “it will be modern, internationally inspired, and highly innovative while still being extremely approachable.”

The one person Bagale wishes would dine at his restaurant? Bill Murray. “I think he brings a certain level of charm to most events, is a brilliant comedian, and seems like he enjoys a great time,” he explains.

As for what he’d prepare for the famed funnyman: “tacos made with fresh tortillas—and lots of mezcal.”

How To Read Your Form W-2 At Tax Time