Breaking
ESBC Major Updates: Tons Of Heavyweight Greats Added...
5 On-Demand Courses To Help Develop Your Leadership...
How to Run Nonprofit Marketing Ads
Entrepreneurs Are Bringing Transparency To Home Buying And...
Best Incentive To Get Vaccinated: Money, Messaging, Or...
Page Level Query Analysis at Scale with Google...
How A CIO Can Align IT With Business...
Blogger of the Month: Jo, Girl Eats World
6 Things Women In Business Know That Men...
How to Use First-Party Data for Ad Personalization
Pressing Reset—Putting A Fallen Unicorn Back On Its...
How We Went Viral: Promoting Content with Influencers,...
Blame Olympic Record Price Tag For Return To...
Apple iOS 14.5 Release: Should You Upgrade?
How to Come up with Podcast Topics and...
Why Gaming Gear Company Razer Launched A $50...
Home Technology Microsoft Demands Success From Windows 10X And New Surface Hardware
Technology

We all know where 2020 is going to finish for the Microsoft Surface team… with the hopefully triumphant launch of the Surface Duo and Surface Neo, leading a charge of multi-screened devices using Windows 10X. We know this because Microsoft has told us that’s the goal (even though Redmond still has to deliver). But the journey is just as important for Microsoft at large and the Surface brand in particular.

What will Microsoft need to deliver in terms of software, hardware, and vision during 2020? 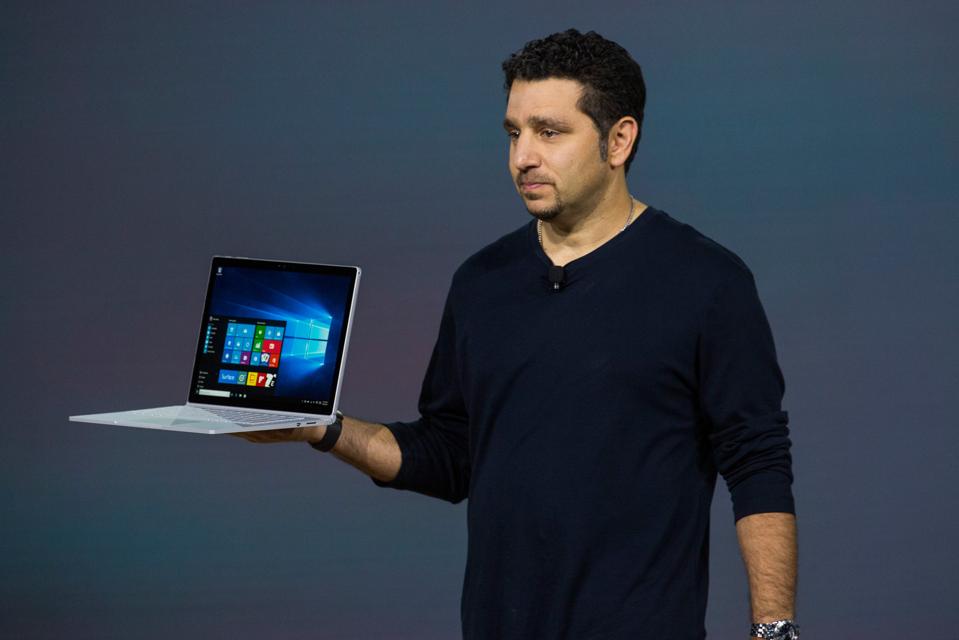 First up, let’s start with the software. Windows 10X is the variant of the main operating system that is designed to work both on multi-screen computers and those with folding screens. As noted previously here on Forbes, this will power the Surface Neo and a raft o new designs from manufacturers such as Dell, Asus, and Lenovo. Put simply, Windows 10X needs to deliver, pretty much out of the gate in Q4 2020:

“The early announcement of Windows 10X, coupled with the Surface Neo’s release date of Q4 2020, has created a hard deadline for the Windows team to deliver Windows 10X not just to the Surface team at the Redmond Campus, but to Microsoft’s key hardware partners who have shown their hand at CES.”

This isn’t restricted to Windows 10X. Not only does Windows 10 needs to be kept up to scratch, but Microsoft will be powering the Surface Duo with Android. This is a step up from its suite of Android and iOS apps, and again that’s something that needs to ‘just work’ when it arrives later this year.

Software wise these are all highly visible projects that Microsoft has committed to delivering. 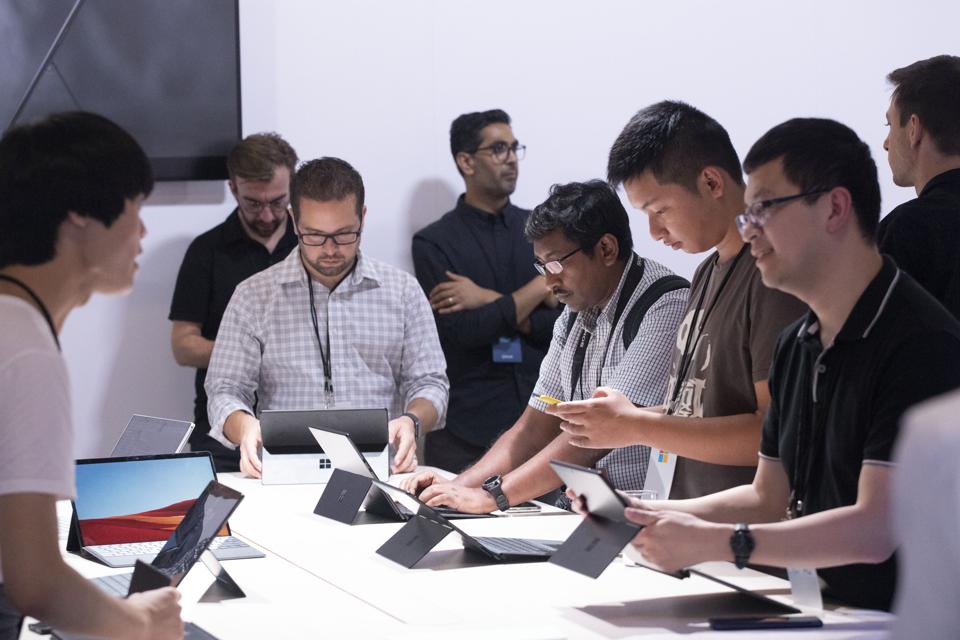 Then there’s the existing hardware family – the Surface Hub, Surface Studio, the Surface Pro, the Surface Book, Surface Laptop, and Surface Go. The recent October event saw the Surface Pro receive a next-generation update, along with the launch of the Surface Pro X and the Surface Laptop. Notably these two models saw the introduction of a design that makes them easily repairable. Although parts will not be offered directly to users, the modular design will all for major components to be repaired in-house with a large enterprise roll out, or quicker repair at approved third-party service centers.

Especially where business is concerned, the longer the time without a machine, the more costly it is. There’s also the fully removable hard drive in the Surface Pro X, hiding behind an easily removable plate. If a Pro X has to go away for repair or be switched out, the data can stay with the user on the SSD.

I’ve no doubt that as Microsoft refreshes the key families in the Surface range, this new approach to design and repair will feature in all the hardware. That should make the various devices more attractive to enterprise partners, and assuming the spare parts are easily obtainable, is a bonus benefit to smaller companies and consumers. It’s not as extensive as some manufacturers, but it is far more

Will that be enough to maintain the excitement around the Surface brand? It has been a while since Microsoft had a summer launch event, and I’m not sure that the updates alone would make for a strong event. This year the focus needs to be on the new software and bringing developers on board with Windows 10X (and Android to a lesser extent). So a summer event focused on developers and enterprise around Windows 10X and the mobile opportunity, with some hardware upgrades also in the keynote, would be something that I think is a strong possibility. 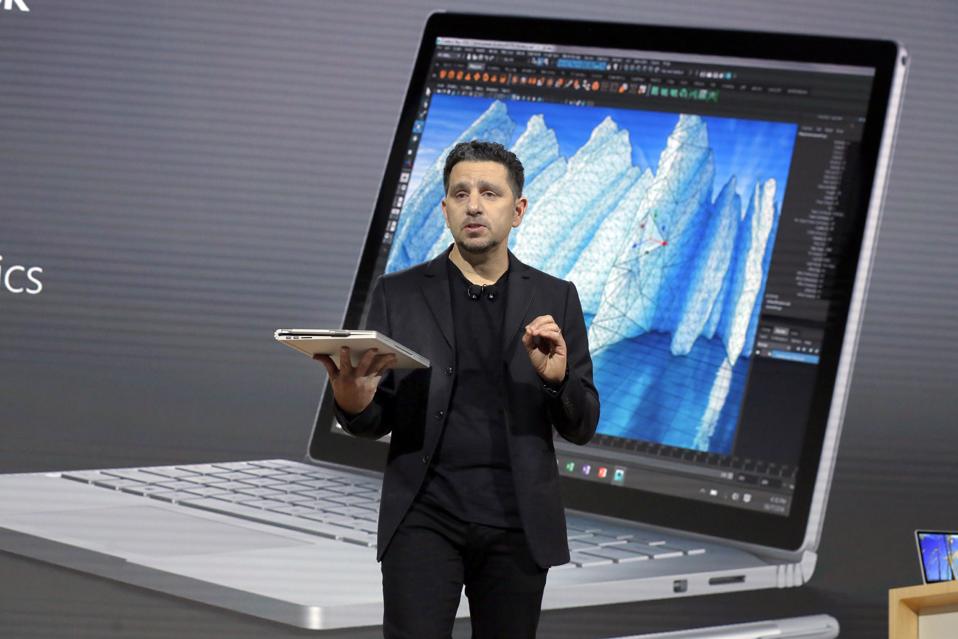 In one sense, Microsoft has taken the pressure off the Surface range. The Surface Duo and Surface Neo are going to dominate the conversations, eve though the will not be on show for the end of the year. If the temperature needs raised, a feature or two can be presented or some ‘early looks’ organised with the press.

That doesn’t mean the rest of the Surface family can sit back. The changes started in the Surface Pro X and Surface Laptop designs need to be carried over, and the benefits of this approach needs to be reinforced. Hardware continues to evolve so Surface need to evolve with it. The main lines need to keep growing and selling, no matter what the Duo and Neo bring to the table in terms of innovation and cachet.

Every company has release schedules, internal pressure, and public expectations. Microsoft will have had these in the past for software releases and hardware launches. In the past, you could walk right up to a launch and pull a product (see the tale of the Surface Mini, pulled around two weeks from launch after numerous leaks).

Not with Windows 10X, not with the Surface Duo, or the Surface Neo. The call has already been made, the clock is ticking, and as of now the public pressure will keep increasing until delivery releases the reality. Will that be enough to meet expectations?

L.A. Chargers’ Philip Rivers Is Already On The Move This Offseason