Breaking
Extra $300 Weekly Unemployment Benefits Are Still Going...
Four Ways To Grow Your Team Via Professional...
These Up And Coming Tech Hubs Are Having...
Overwatch Is Testing A Soldier 76 Buff In...
3 Ways I’ve Learned Conversations Can Change The...
11 Considerations When Determining An Equity Offer To...
ESG Metrics: A Path Forward For Companies
‘Moriarty The Patriot’ Makes A Hero Of Holme’s...
Mind The 99 Year Gap: How To More...
The WFH Revolution: How Covid-19 Is Changing The...
eToro Announces Staking For Cardano And Tron
Fintech Startups: Plan For Your Customers’ Emotional Realities
The End Of Third-Party Data — Finally
The Scientologist Billionaire Trying To Make A New...
Mission-Driven Fintech Kontist Shakes Up The Future Of...
What Can The Simple Fact That ‘We Exist’...
Home Technology Microsoft Surface Shock As New Surface Go 2 Revealed
Technology

Although the geeerati’s attention is on Microsoft’s dual-screened Surface Duo and Surface Neo devices, these are by design not going to be on sale before the end of the year. Until then there are a lot of Surface devices to go on sale, and a number of Surface products which can be quietly updated to keep them on top of Specifications Top Trumps.

“The 3DMarks benchmark listing suggests Microsoft is working on Surface Go 2 with Intel’s Core m3-8100Y CPU. There are two variants of the Surface device, one with the WiFi and another with LTE + WiFi. Both Surface Go 2 models have 8GB of RAM and 128GB of SSD storage from Toshiba.”

Launched in 2018, the Surface Go was a beast with two masters. From the consumer point of view, this was a lightweight tablet running Windows 10. It might not have had the ridiculously high levels of performance seen in the Surface Pro and Surface Laptop machines, but there was enough there for the likes of email, social media, music, video, browsing, and Office365. That made it a great machine for students and those needing something portable that was affordable that worked.

It also acted as an enterprise tablet that would be suitable for front line services, be it as a point of sale tool, on a factory floor, or out in the field. Don’t forget that the Surface Go had a bonded screen and waterproofing to help protect it against the environment. 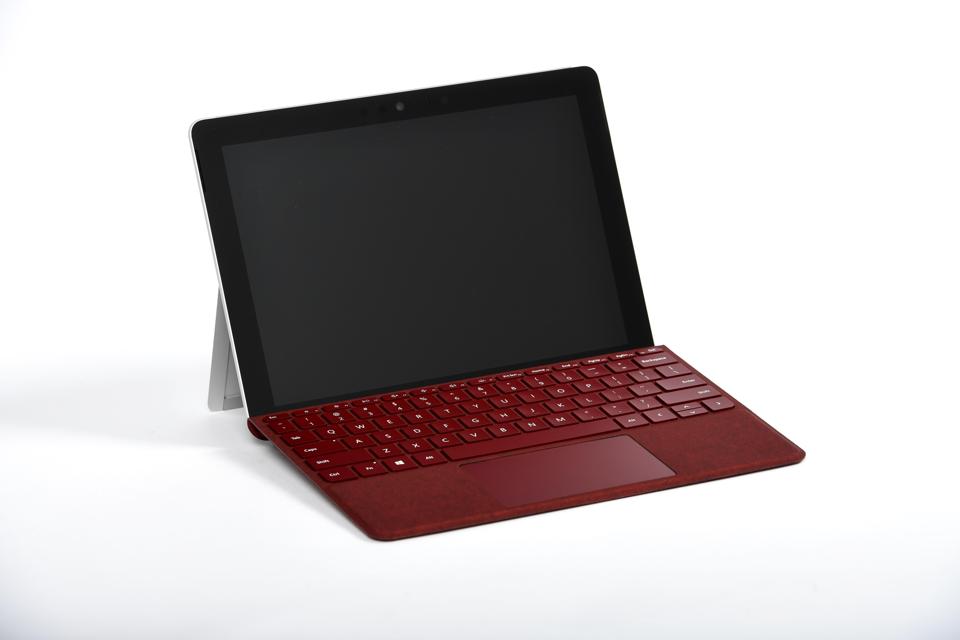 Two years later, the Surface Go’s processor was underpowered, and that remains the case today. The base model’s 4GB of RAM and 64GB of eMMC storage works for an installation of one or two apps (such as point of sale or a tablet in the hospitality services), but it’s time to bump that up.

From the looks of the benchmarking, we can expect Intel’s Core-m3 chip paired up with 8GB or 12GB of RAM and 128GB of SSD storage.

I also hope that Microsoft, in redesigning the Surface Go platform for the Surface Go 2 has brought over the same ‘easy to repair’ ethos seen in the Surface Laptop and the Surface Pro X. While there may be some extra considerations if waterproofing is to remain part of the equation, there’s reason that – although modular – repairs will not be for the public but third-party authorised repair centres and IT departments in larger enterprise installations.

It may not be as sexy or as eye-catching as the foldable Surface devices coming up later this year, but a revamped Surface Go, quietly selling units without gathering a lot of media attention, is just as important in the long run as innovating at the bleeding edge of portable tech.

Now read my review of the first Surface Go…