In terms of owning innovation and design in laptops, the fight between Apple’s MacBook family and Microsoft’s Surface family is a slow-burn of intense competition. Microsoft’s move at the end of last year may well prove to be a cunning plan that will give Surface an advantage.

The launch of the Surface Laptop 3 and the Surface Pro X included a demonstration of the repairability of the devices, as Microsoft’s Panos Panay stripped the machines into various modules that could be switched out with ease. He also demonstrated the removable SSD drive for data integrity.

These were the first Surface devices designed with this ethos. I would expect this to expand to the rest of the Surface range during 2020. While consumers looking for repairs will still need to seek out a first- or third-party repair center, there will be a significant saving in the enterprise space.

Larger clients will be able to take part in Microsoft’s repair program on site. Need to replace a Surface screen? Head down to the IT department and go for a long lunch. Rather than send the hardware away for a multi-day delay, the turnaround could be a matter of hours, with all the data and proprietary information remaining inside the company walls.

And if there needed to be a bigger repair that wasn’t covered by the modules, then the SSD sits under a small SIM like door and can be removed with a pin. No data ships with the machine, and the SSD can be switched into an equivalent unit to get the user up and running again. 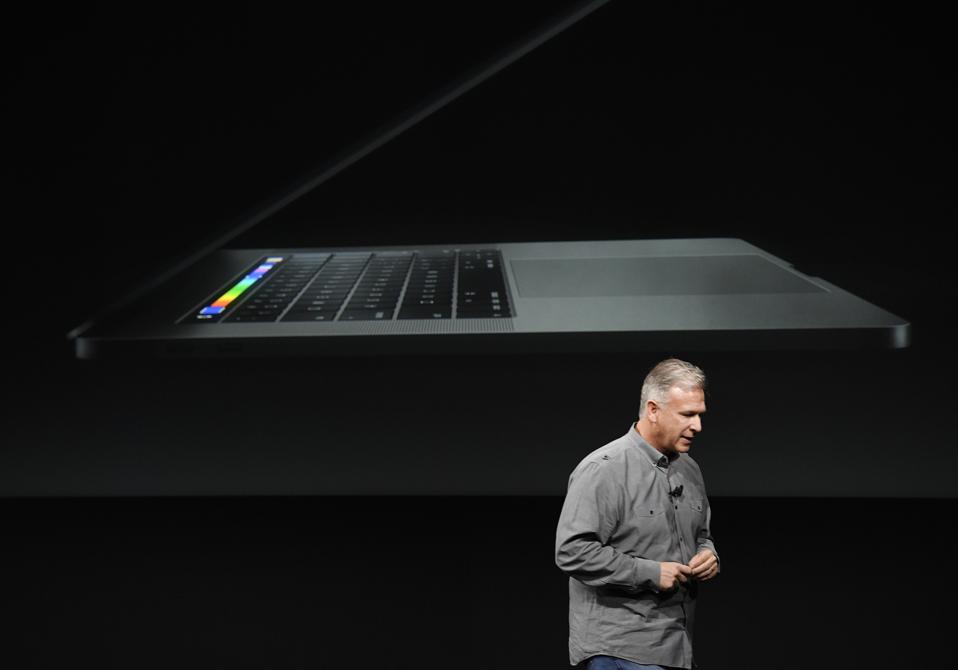 Philip “Phil” Schiller, senior vice president of worldwide marketing at Apple Inc., speaks … [+] during an event at the company’s headquarters in Cupertino, California, U.S., on Thursday, Oct. 27, 2016. Apple Inc. introduced the first overhaul of its MacBook Pro laptop in more than four years, demonstrating dedication to a product that represents a small percentage of revenue. Photographer: David Paul Morris/Bloomberg

Compare that Apple’s approach with the MacBook Pro. Everything is sealed into the laptop. You can’t easily remove the back, or get at the hard drive. You can’t switch out components or perform your own basic repairs on site yourself.

If you’re not signed up to AppleCare for Enterprise (which authorizes IBM’s Global Technology Services to provide next business day servicing), it’s either a trip to the Apple store twice (once to drop off, once to pick up) or a couriered repair back to Apple. And if you have a machine that won’t switch on, there’s no easy way to wipe the data or be one hundred percent confident you’ll get back the same machine – a replacement machine will not come back with your data and that may breach data policies.

In terms of repair, the MacBook range is a fortress, while the Surface range is opening up. Just compare the comments from the iFixit team after teardowns of two machines. First the Surface Laptop 3:

“Microsoft pulled this off without making the laptop one iota thicker or clunkier, defying all the naysayers who claim repairable designs can’t be sleek and attractive. While this iteration is still far from perfect, if Microsoft continues in this direction, the future of their laptop line is bright. There are some very clever design-for-repairability touches in this machine.”

Then the Apple MacBook Pro:

“Meanwhile, the fundamental problem with this laptop remains—if the slightest thing ever goes wrong, you’ll be replacing half the machine. Even if the keyboard is perfect this time, you’re taking a gamble on everything else. Our advice? Save your money.” 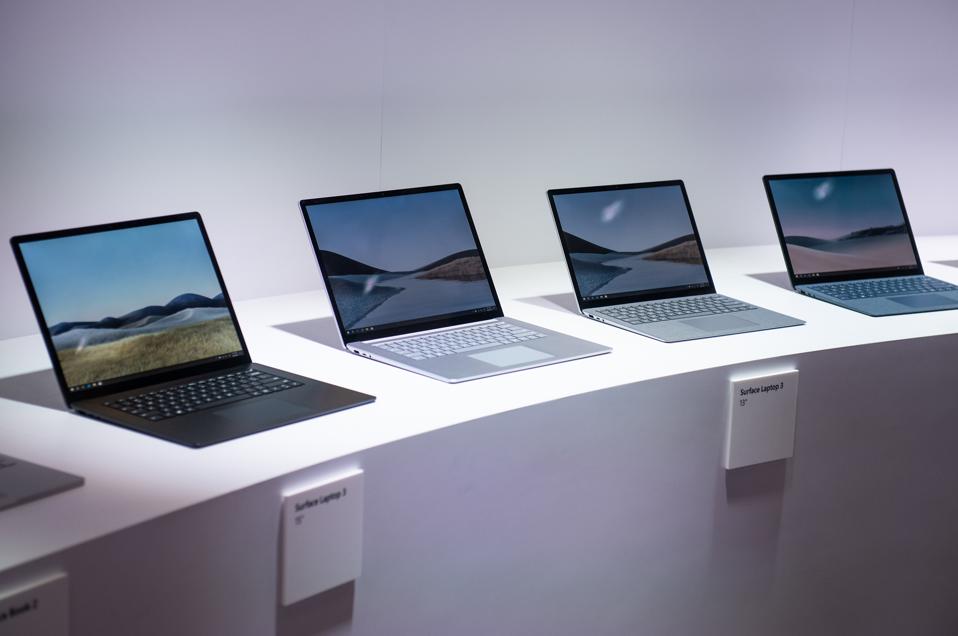 Microsoft Corp. Surface Laptop 3 computers are displayed during a product event in New York, U.S., … [+] on Wednesday, Oct. 2, 2019. Microsoft unveiled a dual-screen, foldable phone that will run on Google’s Android operating system, jumping back into a market it exited years ago. Photographer: Mark Kauzlarich/Bloomberg

Apple continues to hold its hardware very close to the mothership. To be fair to Microsoft, when the Surface range started it took the same approach. But customer feedback, especially from enterprise, has been listened to and acted on. As equipment is renewed around the world, the benefits of Microsoft’s new approach to parts and repairs will make the Surface family more attractive to customers.