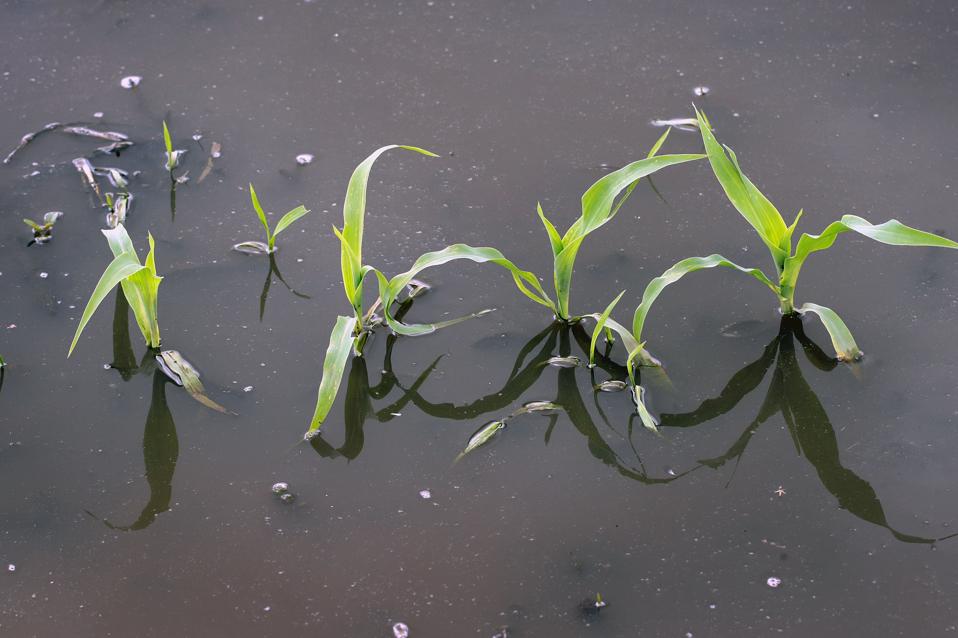 The latest spring weather predictions indicate much of the Midwest could be in for another year of … [+] above-average rainfall. If conditions remain this wet, farmers will struggle again to get their crops planted.

Last spring, Midwestern farmers saw record-breaking rainfall that impacted not only the planting season, but the entire season into harvest. Early weather outlooks are indicating there’s a strong possibility that widespread flooding will return for the 2020 planting season.

Looking at last year, much of the high-production farming areas in the Midwest delayed planting for weeks because of a spring season marred by a stormy and record-wet weather pattern that lasted for almost three full months. The unusually wet weather pattern featured a high-latitude high pressure that blocked the global circulation and forced cool to colder air south along with a summer-strength high pressure system in the southeastern part of the country. And, with sustained energy from the Pacific Ocean because of a weak El Niño Pacific temperature event, those events combined to produce chronic cool, wet and flooding conditions.

With regards to the potential for devastating flooding this spring, Bryce Anderson, a senior agricultural meteorologist at DTN, reports that fields are at record saturation throughout much of the Midwest already. He notes that “any occurrence of precipitation, even normal amounts, is likely going to be too much.”

The U.S. Army Corps of Engineers has also highlighted the issue of extremely wet soils and the potential impact that even normal precipitation may have on the Midwest. Earlier this month, specialists from the U.S. Army Corp of Engineers and National Weather Service called attention to the flood threat. Those experts noted that most the entire Missouri River basin is above normal on soil moisture, with much of the soil moisture content in North Dakota and South Dakota in the 99th percentile, which means a much higher efficiency for snow melt or rain.

“The loaded-to-the-brim soil moisture profile is one factor that could lead to significant spring flooding,” continues Anderson. He also says that other factors could add to the threat of flooding and include formation of above-normal snowpack; a long-lived, widespread cold snap on bare ground that would freeze the soil to a deep level; a sudden transition from winter to spring that would melt the snowpack rapidly and increase the risk of ice jam formation in river valleys; and a heavy rain event on top of the snow pack that would release the water in the snow rapidly.

Recent forecasts have been trending toward lingering late winter cold and snow well into March across the Rockies into the Plains. This pattern will tend to hold the snowpack a little later than normal, increasing the risks for a more rapid snow melt once more spring-like temperatures finally arrive. The heaviest snowpack over the eastern Dakotas, Minnesota and Wisconsin contains 2-5” of water equivalent at this time, with the potential for several storms to lay down significant snow in the coming weeks across the western and north-central U.S. This pattern continues to suggest high risks for flooding once again this spring for the Missouri and Mississippi River basins.

The latest spring weather predictions from Anderson indicate much of the Midwest could be in for another year of above-average rainfall. If conditions remain this wet, farmers will struggle again to get their crops planted. “Spring seasons are becoming wetter across much of the Corn Belt; it’s the impact of climate change,” warns Anderson. “Warmer temperatures are bringing more frequent, and much heavier, rains to the region. It’s creating a long-term trend of wetter springs and I don’t see anything that is getting us away from that this year.”