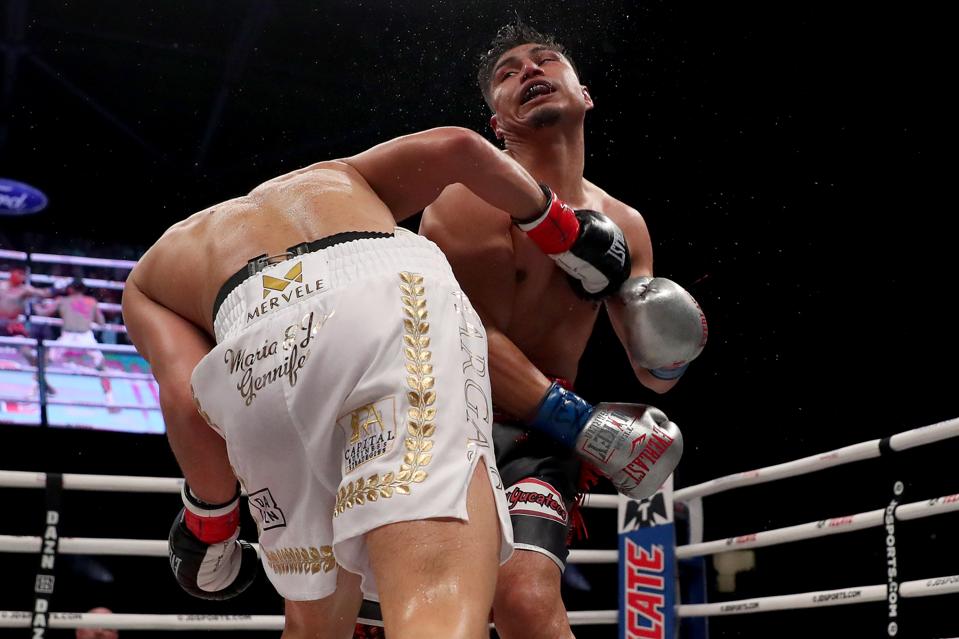 Mikey Garcia got his first victory at welterweight with a solid performance vs. Jessie Vargas. Chocolatito Gonzalez showed some of his old skills vs. Kal Yafai. And Julio Cesar Martinez and Jay Harris put on one of the best fights of the year.

—Eleven months after getting dominated by Errol Spence in his first fight as a 147-pound welterweight, Mikey Garcia (40-1, 30 KOs) finally got his first victory in the weight class. It didn’t come easy, though. On my scorecard, Jessie Vargas (29-3-2) won the first four rounds. But then Garcia hurt Vargas badly in the fifth round and knocked him down, and that’s when the entire fight turned.

Garcia then dominated the second half of the bout and won by unanimous decision—the judges had it 114-113, 116-111, 116-111 (I scored it 115-112). “He definitely felt the power,” Garcia, who made a $7 million purse, said afterward. “After that, every so often, I would hurt him again. I really started to get the rhythm of things.” When I talked to Garcia a few weeks ago, he said he’d consider returning back to 140 pounds. But on Saturday, Garcia said he’d like to stay at 147 and that he’d like a shot at Manny Pacquiao, a fight that very well could be made this summer (Garcia, after all, still has his negotiating clout). “I think I have great options,” Garcia said. “I’m ready to get back in with the best.”

—The former No. 1 pound for pound fighter is back—as a world titlist and one of the best in the 115-pound super flyweight class. Roman “Chocolatito” Gonzalez (49-2, 41 KOs) took Kal Yafai’s (26-1) undefeated record and his world title by knocking him down in the eighth round and then knocking him out in the ninth with a massive straight right hand. Thirty months ago, Srisaket Sor Rungvisai knocked out Gonzalez to win his title. Now, Gonzalez, who was a +110 underdog vs. Yafai, is back among the elite.

Now, it’ll be interesting to see where Gonzalez goes. He said he’d like to begin unifying titles, and my vote would be for a rematch against the division’s champ, Juan Francisco Estrada, the man who lost to Gonzalez eight years ago.

—If Julio Cesar Martinez (16-1, 12 KOs) continues to fight like this, I’m going to have to have think hard about putting him in my top-10 pound for pound list. As he showed vs. the very game Jay Harris (17-1), Martinez is one of the most exciting fighters in the game, even though he’s in one of the most ignored weight classes as a 112-pound flyweight. Martinez defended his world title against Harris in a fight of the year candidate with a unanimous decision. If you don’t regularly watch the 112-pound flyweight division, consider the battle waged by Martinez and Harris as an invitation to check it out more often. Harris had a great night, landing hard body punches and nice combinations. But Martinez was even better, knocking Harris down in the 10th with a hellacious right hook to the body and earning a hard-fought decision.

—A week after Tyson Fury destroyed Deontay Wilder to take his heavyweight title, a former belt-holder declared again that he also is a force in the division. Joseph Parker (27-2, 21 KOs) floored Shawndell Winters (13-3) in the third round, and though Winters cut Parker in the fourth round with a punch, Parker ended the fight in the fifth with a huge combination that knocked Winters down to the canvas and underneath the ropes. Winters beat the count, but he was in no position to continue, and the ref stopped the bout.

After having to cancel his last fight because of a spider bite, Parker wasn’t completely pleased. “I didn’t show my boxing ability. I got excited and started brawling,” Parker told DAZN afterward. “… I have to work on being a bit more patient, slowing down on my punches and making them more meaningful.”  Afterward, he specifically called out Dereck Chisora and Dillian Whyte, who beat Parker in 2018.

—Xander Zayas (4-0, 3 KOs) is looking like a fun welterweight prospect to keep an eye on thus far. And he had a nice performance vs. Marklin Bailey (6-7) on Friday night, ending the evening in the third round with a knockout.

Are IOC, Japan Doing Enough To Address Coronavirus Concerns Ahead Of Olympics?

Trust Your Gut: How This Colombian Scientist Found Her Field

No Small-Business Relief Yet: False Start On Paycheck...

How Much Blame Does The Detroit Pistons’ Front...

The Fisker Ocean Electric SUV Will Finally Get...