Breaking
‘Moriarty The Patriot’ Makes A Hero Of Holme’s...
The WFH Revolution: How Covid-19 Is Changing The...
eToro Announces Staking For Cardano And Tron
Fintech Startups: Plan For Your Customers’ Emotional Realities
The End Of Third-Party Data — Finally
The Scientologist Billionaire Trying To Make A New...
Mission-Driven Fintech Kontist Shakes Up The Future Of...
What Can The Simple Fact That ‘We Exist’...
Stock Market: Here Comes October With Scary Tricks...
Farmers, College Students, And Food Banks Across The...
Thinking Of Writing A Book To Grow Your...
Microsoft Security Report Highlights New Sophisticated Threats From...
3 Steps To Help You Build Entrepreneurial Confidence
SMB Fintech Darling Kabbage To Be Acquired By...
Silicon Valley’s Next Target: The One-Person Business
The Small Business Code Of Ethics
Home Technology Milky Way’s Warp Is Likely Due To Recent Collision With Nearby Dwarf Galaxy
Technology 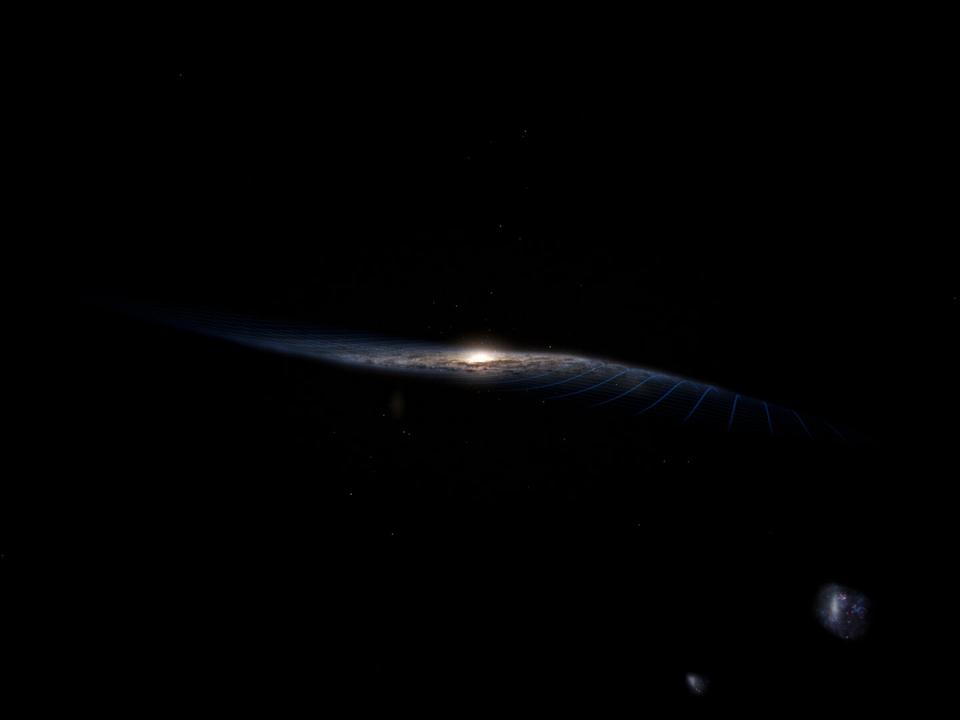 Milky_Way_wThe structure of our galaxy, the Milky Way, with its warped galactic disc, where the … [+] majority of its hundreds of billions of stars reside. Data from ESA’s star-observer Gaia recently proved that the disc’s warp is precessing, essentially moving around similarly to a wobbling spinning top. arp_pillars

For more than a half century, astronomers have known that our Milky Way Galaxy is slightly warped; perhaps not as much as some of its inhabitants but warped nonetheless. Today, astronomers in Italy announced that the galaxy’s warp is very likely due to a cosmically-recent collision with a nearby dwarf galaxy.

In a paper published in the journal Nature Astronomy Letters, note that our galaxy’s warp is a large-scale distortion of the outer disk with respect to the inner disk.  Until now, theorists had few clues as to the cause of the warp.

Our results favor the scenario that the warp of the Milky Way is caused by a recent or ongoing collision with another galaxy, Eloisa Poggio, an astrophysicist at Turin’s Astrophysical Observatory in Italy and the paper’s lead author, told me.

Thanks to the most recent data from the European Space Agency’s (ESA) Gaia spacecraft, Poggio says she and colleagues for the first time had access to high-precision astrometric measurements of billions of stars, says Poggio.

“We compared the data with a model of how the warp orientation changes with time,” said Poggio.  “We measured the speed of the warp from the data and very surprisingly found that it is moving very fast.”

The Milky Way’s disk – where most of its hundreds of billions of stars reside – is not flat but somewhat curved upwards on one side and downwards on the other, says ESA. They proposed various theories including the influence of the intergalactic magnetic field or the effects of a dark matter halo, a large amount of unseen matter that is expected to surround galaxies, says the space agency. If such a halo had an irregular shape, its gravitational force could bend the galactic disk, notes ESA.

The Gaia data confirms that this warp is not static but changes its orientation over time, says the space agency. Astronomers call this phenomenon precession and it could be compared to the wobble of a spinning top as its axis rotates, says ESA. The fact that the warp itself is rotating much faster than previously thought indicates that they warp must be due to something external to the Milky Way itself.  In other words, something more powerful – like a collision with another galaxy, says ESA. 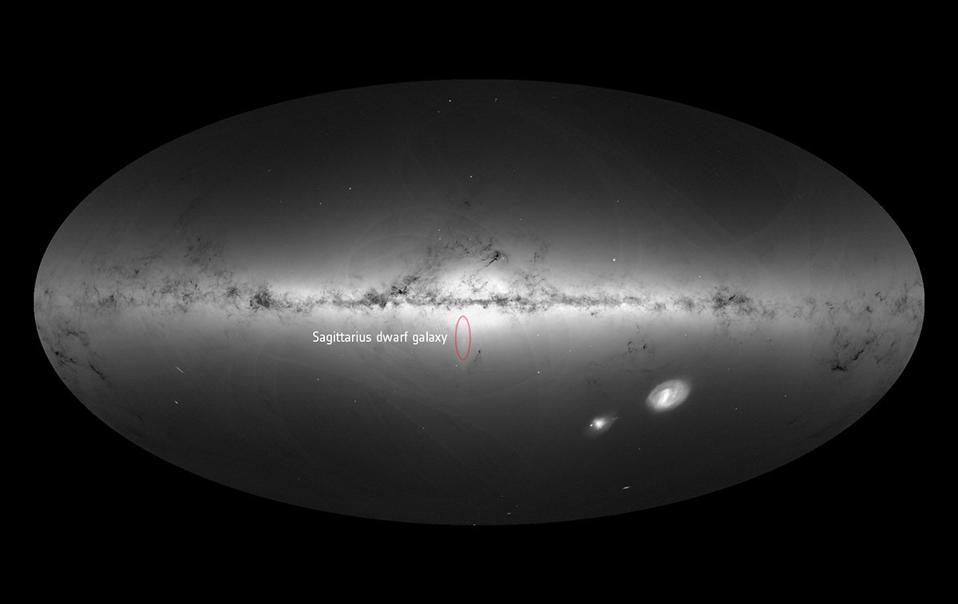 The Sagittarius dwarf galaxy, a small satellite of the Milky Way that is leaving a stream of stars … [+] behind as an effect of our Galaxy’s gravitational tug, is visible as an elongated feature below the Galactic centre and pointing in the downwards direction in the all-sky map of the density of stars observed by ESA’s Gaia mission between July 2014 to May 2016.

Why study such warps?

“Galactic warps and their dynamic nature could reveal key information on the formation history of galaxies and the mass distribution of their haloes,” the authors write.

The astronomers do not yet know which galaxy might be causing the ripple nor when the collision started, says ESA. But One of the contenders is Sagittarius, a dwarf galaxy orbiting the Milky Way, which is believed to have burst through the Milky Way’s galactic disc several times in the past, ESA notes.

Is this warp unique to the Milky Way?

Warps are very common features; more than 50% of spiral galaxies are warped (including our neighbor, the Andromeda Galaxy (M31), says Poggio.  However, our galaxy presents a unique case study for warps; we can study the Galaxy “from the inside,” she says.

How To Tell If You Have A COVID-19 Coronavirus Infection