MLB In Arizona Plan Cannot Be The Permanent Solution 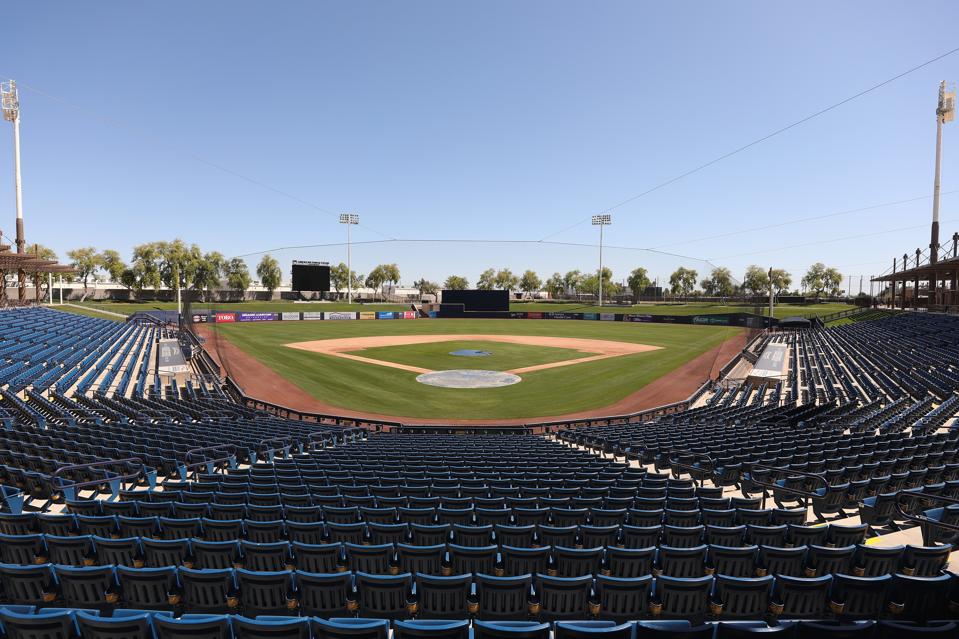 PHOENIX, ARIZONA – APRIL 07: General view inside of the Milwaukee Brewers spring training facility, … [+] American Family Fields of Phoenix on April 07, 2020 in Phoenix, Arizona. According to reports, Major League Baseball is considering a scenario in which all 30 of its teams play an abbreviated regular season without fans in Arizona’s various baseball facilities, including Chase Field and 10 spring training venues. (Photo by Christian Petersen/Getty Images)

On Monday, multiple outlets reported that a plan to bring baseball back by the end of May might be coming together.

Simply, the idea is to have all games played at spring training sites and Chase Field in Arizona and with no fans in attendance. Players would be sequestered in hotels for the length of the season and only essential team personnel would be present before, during, and after games.

As Forbes’ Barry Bloom wrote Tuesday, this could be the only way to save the MLB season from being heavily truncated or even from being canceled altogether.

While this is probably true, having the entirety of the season played in one part of the country and without fans in attendance would be disastrous for baseball. The initial novelty of having a sport, any sport, back in action would certainly carry attention for the first few weeks, but come July, August, and so on, baseball fans would ultimately still lose.

At this point, it is still very difficult to project when the countrywide shelter-in-place orders will have lifted enough for a ballpark with tens of thousands of people to be a safe place, so filling up stadiums in New York, Chicago, and Los Angeles might not be a choice this year.

Currently, President Donald Trump has extended the national shelter-in-place through April 30, but given the length of time it has taken for places like China and Italy to see the number of COVID-19 cases drop, it is likely that shelter-in-place will extend at least into May.

But if there is a point in the baseball season when life has returned to normal, then the in-person experience for fans needs to be there. If the whole 2020 season is played in Arizona in empty ballparks, players will recoup most of their earnings and teams can absorb some of the losses they are facing, but fans won’t.

Being at a game in person, with other fans, provides a psychological boost to those in attendance, win or lose.

“We live in a social context, and we are meant to be around other people,” Jeffrey Fishbein, a clinical psychologist in Chicago’s north suburbs, said in a Sporting News article last May. “When you think about when you’re watching a game by yourself at home, and it’s really exciting and something great happens, typically what do you do? You go text somebody: ‘Did you see that? How sick was that play?’ And when you’re with other people, there is that common ground that we all saw it together, and it becomes a memory.”

“And that’s part of the affiliation. It’s not just an affiliation to the team, it’s attachment to all the other people I experienced this with,” Fishbein said. “And on a larger scale that gives people sometimes even a greater sense of self. The act of being a fan like that is sort of akin to deriving one’s self-esteem basking in the glory, basically.”

Keeping baseball tucked away in Arizona for the entire season would hurt more people than just the fans, too. Every team depends on a large group of employees who maintain and run the operations of each ballpark.

In March, just a few days after MLB commissioner Rob Manfred shut down spring training and announced that the start of the season would be delayed, all 30 teams pledged $1 million into a fund to help those stadium employees whose income would be negatively impacted.

Nearly all of those employees are paid by the game and before that announcement, they were facing the prospect of losing the entirety of their income for the baseball season. The number of these types of employees obviously varies by team, but most teams have somewhere in the neighborhood of 60. At larger ballparks or those with larger crowds, that number is going to be higher.

The $1 million per team sounds like a lot as a whole, but when it gets divvied up between the 60-80 ballpark employees who usually do things like man concession stands, pour beer, or clean the bathrooms, that breaks down to about $16,000 or less per person. If possible, they will need the opportunity to get back to work.

Major League Baseball and the players’ association might not have that in their control. Already, major sports events in July and August have been canceled or postponed — the Wimbledon and the summer Olympics — so playing regular season games at ballparks around the country might not be an option this year.

Regardless, MLB should not commit to playing out this season in Arizona before they have to. If beginning there means that baseball returns sooner, that’s a win, but remaining in Arizona all season would ultimately prove to be a loss.

Only Six K-Pop Albums Have Charted For A...

Coronavirus May Have Been Spreading In China Last...