MLB The Show 20: 21 Legends Still Missing From The Roster 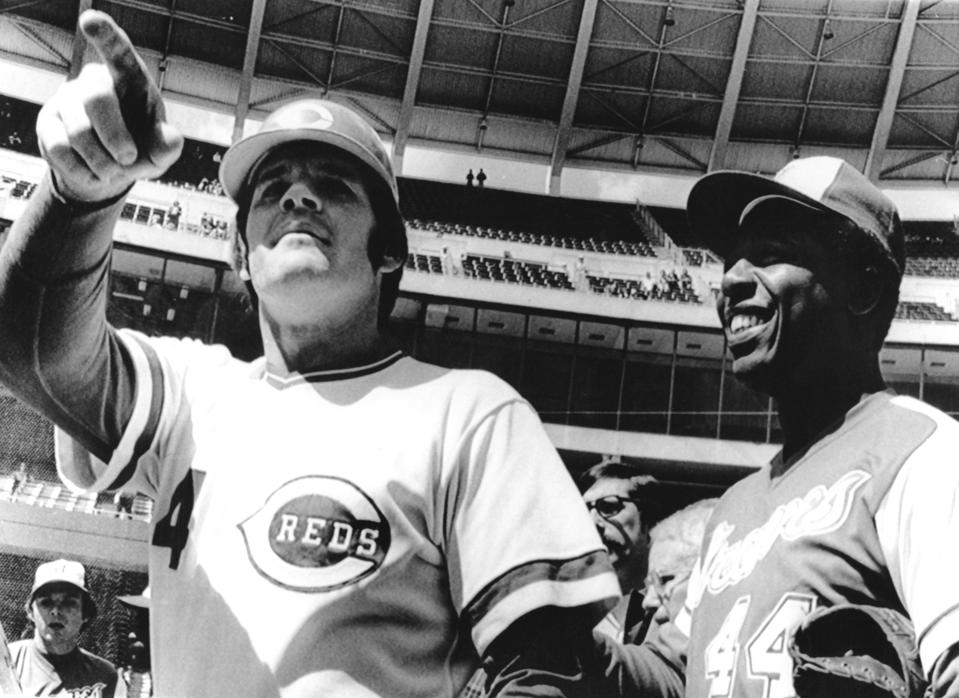 Sony has done a decent job adding legends to the roster of the MLB The Show series, but hardcore baseball gamers can never get enough of the nostalgia mixed in with today’s technology.

In light of that, here are 21 legends that would make the game’s already impressive list of all-time greats even better.

There are a number of players on this list who have been on the wrong side of the steroid discussion, but it’s time to turn the page on that black eye for the sport. That means it’s time to stop ignoring guys who were obviously the greatest of their era and put them in the game.

For some on this list, their exclusion may be political. For others, it could simply be a matter of licensing. 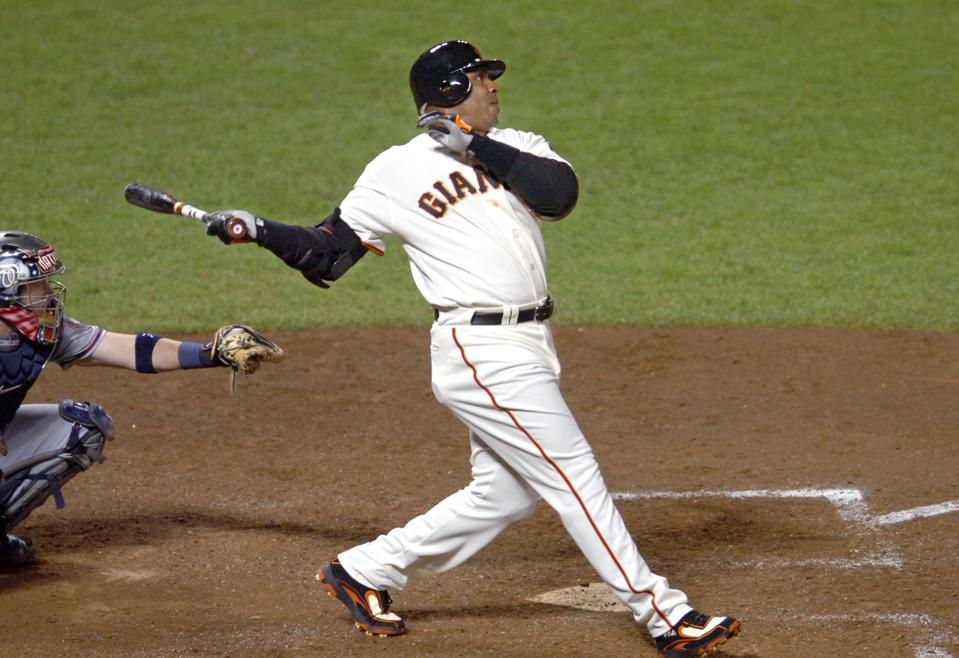 Baseball’s all-time HR King, single-season HR record holder and seven-time MVP winner deserves to be in the game. Fans of The Show–especially those who play Diamond Dynasty–are being cheated of the experience of controlling arguably the greatest player in history.

He’s known primarily as Barry’s dad amongst some younger baseball fans, but Bobby was a great player in his own right. He was a three-time All-Star and Gold Glover with 332 career home runs and 462 stolen bases.

Bobby and Barry are the only two players in MLB history to record 300 career home runs and 400 stolen bases.

For years, Aaron was the all-time HR king. He is unquestionably one of the greatest hitters of all time. When you consider his time in the Negro League as well, Aaron’s omission is among the most egregious.

Despite his issues, can anyone dispute Rose as one of the greatest hitters in history. The man with the most hits in baseball history is supposed to be in MLB The Show, and the Hall of Fame.

The same goes for Bonds and a few others on this list. 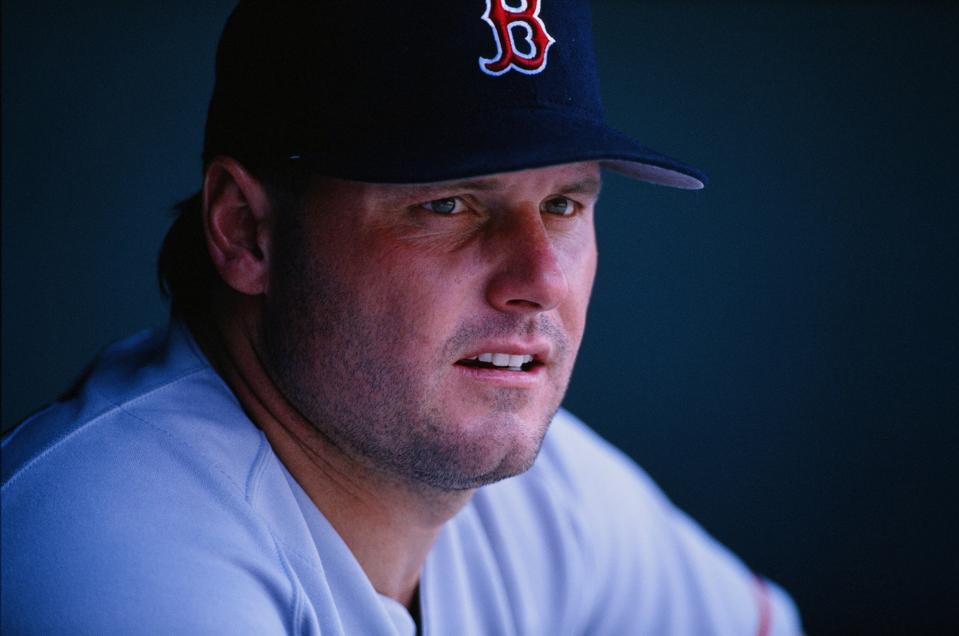 BALTIMORE, MD – JULY 6: Roger Clemens of the Boston Red Sox looks on against the Baltimore Orioles … [+] at Oriole Park at Camden Yards on July 6, 1996 in Baltimore, Maryland. The Orioles defeated the Red Sox 4-3. (Photo by Sporting News via Getty Images via Getty Images)

Clemens is to pitching omissions what Bonds is to the hitter’s missing greats. With 7 Cy Young awards, an MVP, two Triple Crowns and two World Series rings, you can make the argument Clemens is the greatest pitcher of all time. 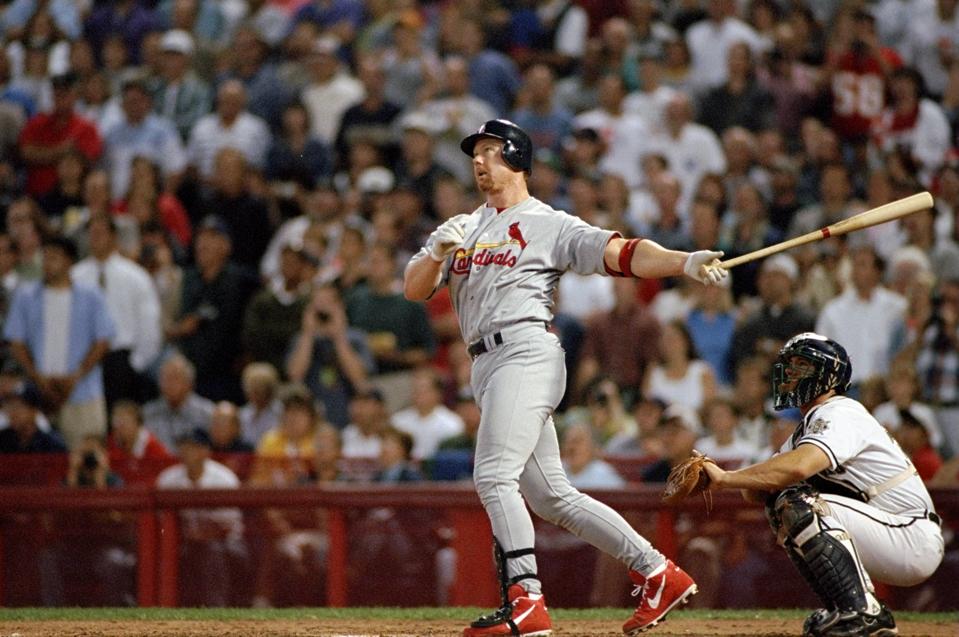 18 Sep 1998: First baseman Mark McGwire #25 of the St. Louis Cardinals hits his 64th home run of … [+] the season during a game against the Milwaukee Brewers at the County Stadium in Milwaukee, Wisconsin. The Cardinals defeated the Brewers 5-2. Mandatory Credi

Love him or hate im, McGwire helped define one of the most exciting eras in baseball history. His power was real from his rookie season up until his final campaign in the majors. The 12-time All-Star led the league in homers four times and clubbed 583 for his career with 1,414 RBI. 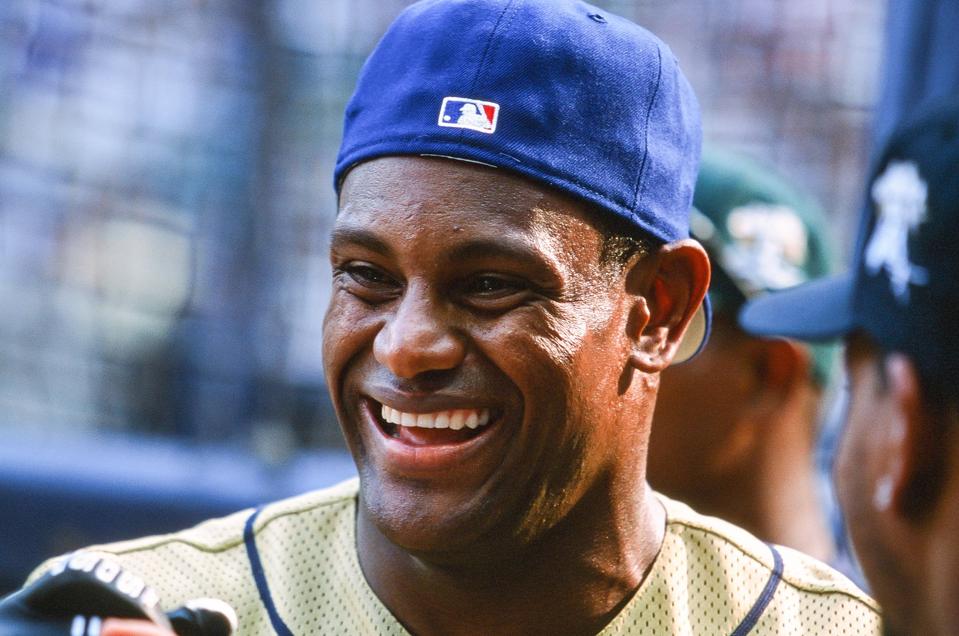 His story is similar to McGwire’s and so are his numbers.

The former National League MVP led the league in home runs twice and smashed 609 dingers in his career. While many won’t admit it, Sosa is the greatest Chicago Cubs player of all time.

Considering the history and popularity of the franchise, that has to mean something.

To a lesser degree than McGwire and Sosa, but still significant enough, Canseco was important to the late 1980s and early 1990s in baseball. His blend of power and speed was extraordinary, and he had a charisma unlike most players before or after him.

His prime was much shorter than McGwire and Sosa, but boy was he fun to watch play the game.

He was one of the game’s most complete players in the 1950s and 60s. His combination of power and speed was noteworthy and his name is revered amongst baseball fans old or astute enough to be aware of his impact. 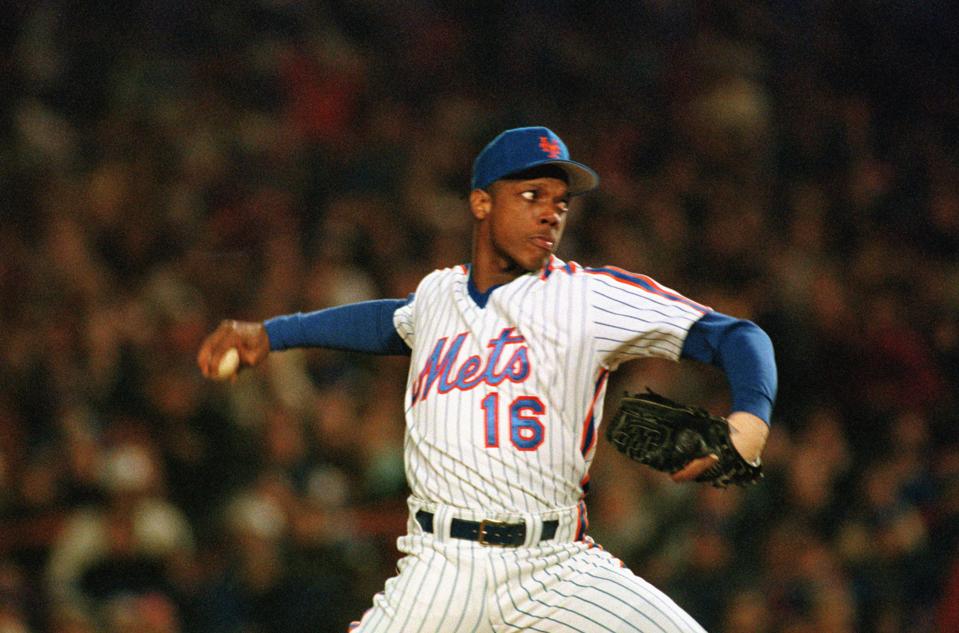 (Original Caption) New York: Mets’ Dwight Gooden bears down against the Dodgers in game #4 of the … [+] NLCS. Gooden had seven strikeouts through seven innings as the Mets were leading 4-2.

There are plenty of players who are already in MLB The Show who don’t exactly have spotless personal lives and careers. The fact is, no player during the 1980s was quite as dominant as Gooden in his prime. From his rookie season as a 19-year-old, his Triple Crown sophomore campaign, and through 1990, Gooden may have been the best pitcher in baseball.

Strawberry shared the spotlight on some of those memorable New York Mets teams with Gooden, and unfortunately some of the same personal struggles.

Athletically, Strawberry was about as gifted as any player in his era. He was an All-Star every year from 1984-91, and he won National League Rookie of the Year in 1983. 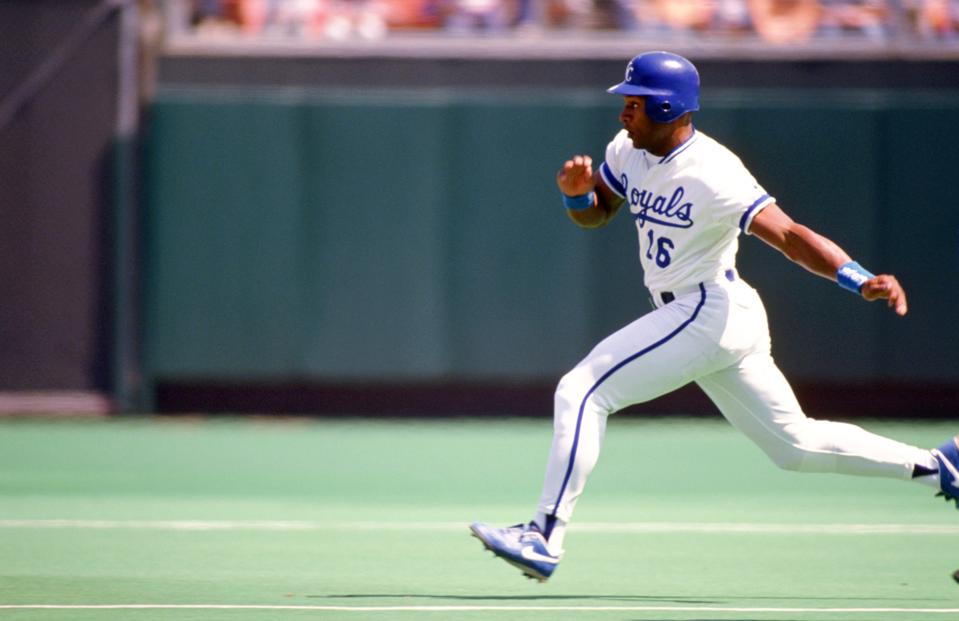 KANSAS CITY – 1990: Bo Jackson of the Kansas City Royals runs the bases during an MLB game at … [+] Kaufmann Stadium in Kansas City, Missouri during the 1990 season. (Photo by Ron Vesely/MLB Photos via Getty Images)

Don’t get this wrong; Jackson never got an opportunity to become a truly great baseball player. We’d seen huge power numbers, blazing speed, a cannon arm, and crazy range in the outfield, but never for a sustained period for him to take the next step as a player.

That said, Jackson’s inclusion would still make him one of the coolest and most coveted cards in DD.

Before Miguel Cabrera did it in 2012, Yastrzemski was the last major-league player to win the Triple Crown. Yaz is arguably the greatest Boston Red Sox player and one of the biggest stars of the 1960s and 70s. 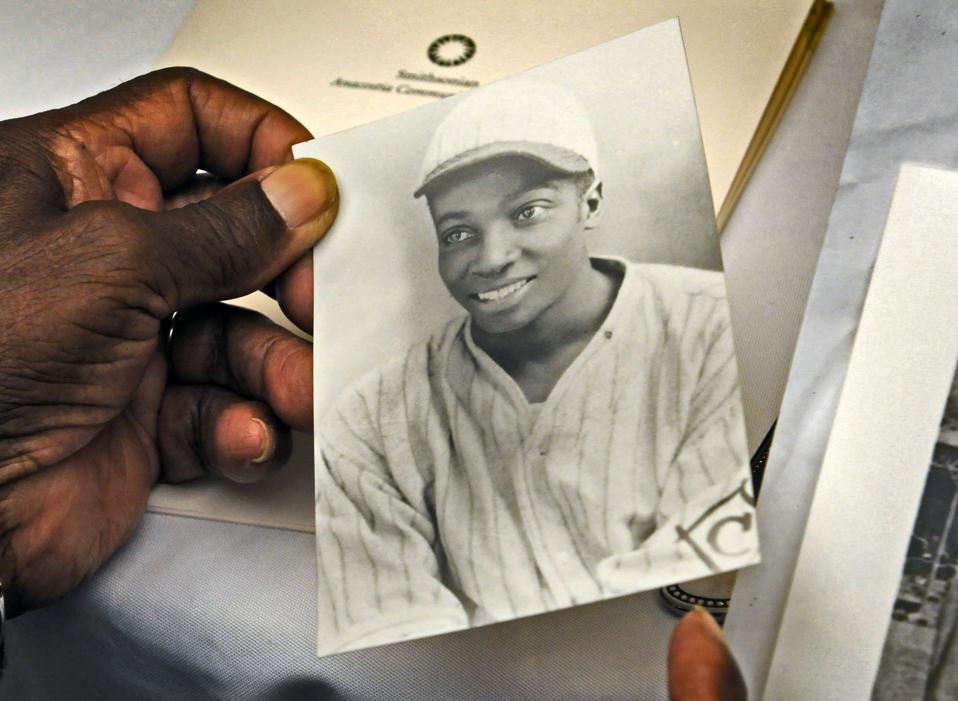 SLUG: ME-LEGENDS DATE: 9/15/08 CREDIT: BILL O’LEARY / TWP WASHINGTON, DC. In celebration of the … [+] museum’s 41st anniversary, the Smithsonian’s Anacostia community Museum honors Negro baseball league greats, both living and dead, with a luncheon and awards ceremony. Pictured, a guest looks at an old photo of James “Cool Papa” Bell, who passed away in 1991, but is being honored today. William “Sonny” Randall and James P. “Jim” Tillman, who both played for the Washington Homestead Grays, told their story that is now part of an exhibit at the Washington Historical Society (801 K Street NW) called “Seperate and Unequal:Black Baseball in the District of Columbia.” Camille Giraud Akeju, director of the Anacostia Museum, said the exhbit is reminder of the legacy of a brave group of athletes who were forced to be at their best on and off the field. (Photo by Bill O’Leary/The The Washington Post via Getty Images)

Obviously there are some licensing hurdles to overcome, but I have to wonder why The Show hasn’t been able to, or hasn’t seen fit to include some of the top players from the Negro League.

Bell was by many accounts, the fastest man in baseball during his era.

It was once said with mounds of entertaining hyperbole, Bell was so fast, he could switch the light off in a room and be in bed before the room got dark. I imagine his card would be a fun one to use in DD. 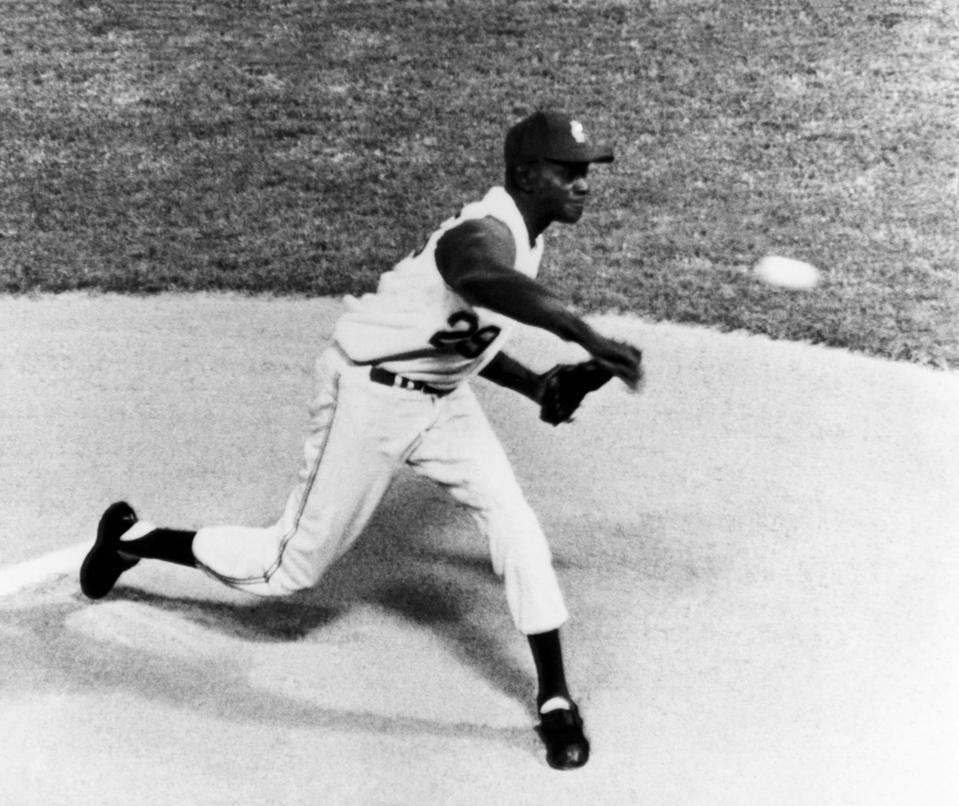 KANSAS CITY, MO – SEPTEMBER 25: Pitcher Satchel Paige #29 of the Kansas City Athletics throws the … [+] pitch during an MLB game against the Boston Red Sox on September 25, 1965 at Municipal Stadium in Kansas City, Missouri. Paige was 58 years old when he started the game. (Photo by Bruce Bennett Studios via Getty Images Studios/Getty Images)

Paige was the greatest Negro League pitcher and one of the most dominant in any league. His longevity, arm and variety of pitches would play well in The Show. Also, like Bell and the next person on this list, Paige’s inclusion would give a notable historic player a presence with fans of a new generation. 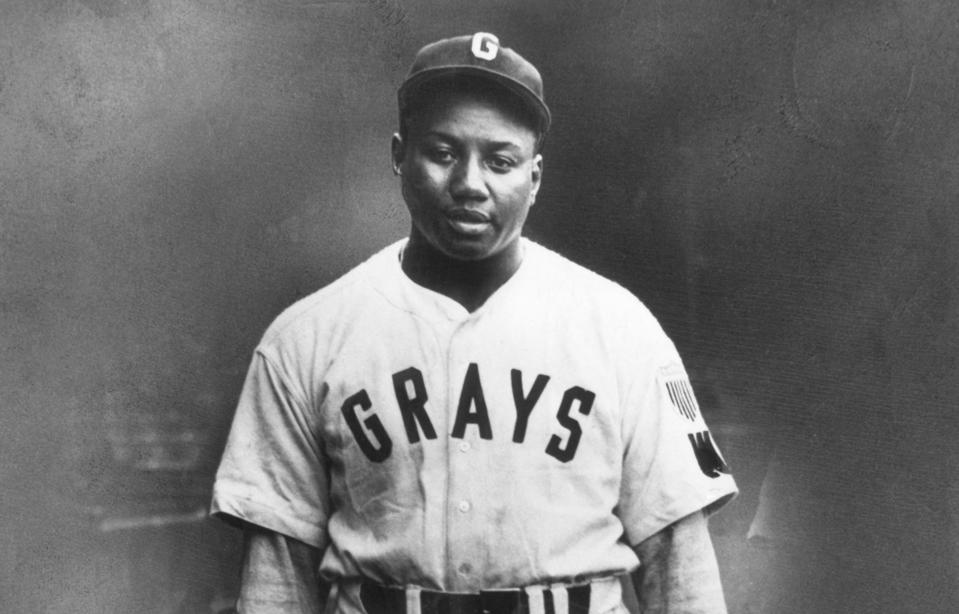 Portrait of baseball great Josh Gibson in a Homestead Grays baseball uniform. Known as the “Black … [+] Babe Ruth” for his home run prowess, Gibson played for the Pittsburgh Crawfords and the Homestead Grays in the Negro Leagues. He never had the opportunity to play in the Major Leagues because he died a few months before Jackie Robinson’s historic debut with the Brooklyn Dodgers. 1945.

Gibson might be the best-hitting catcher in baseball history. The massively powerful backstop never made it to the majors, but some believe he might have been an even better player than Jackie Robinson, the man who ultimately broke baseball’s color barrier.

Catcher is one of the weakest positions in DD. Gibson’s inclusion would strengthen the collection of catchers.

While Rickey Henderson got most of the attention as the premier stolen base threat in the 1980s and 90s, Raines wasn’t far behind him. His 808 career stolen bases is good for fifth all time, and his .294 career batting average with 980 RBI proves he was much more than just a speed threat.

ST. LOUIS – 1986: Vince Coleman of the St. Louis Cardinals runs the bases during an MLB game at … [+] Busch Stadium in St. Louis, Missouri during the 1986 season. (Photo by Ron Vesely/MLB Photos via Getty Images)

While he didn’t have as many career stolen bases as Henderson or Raines, Coleman does have the most seasons with at least 100 steals in the modern era. He eclipsed the century mark on three different occasions.

Coleman led the league in steals in each of his first six seasons in the majors and amassed 752 pilfers in just 13 years. Raines played 23 seasons and only bested Coleman by 56 steals. 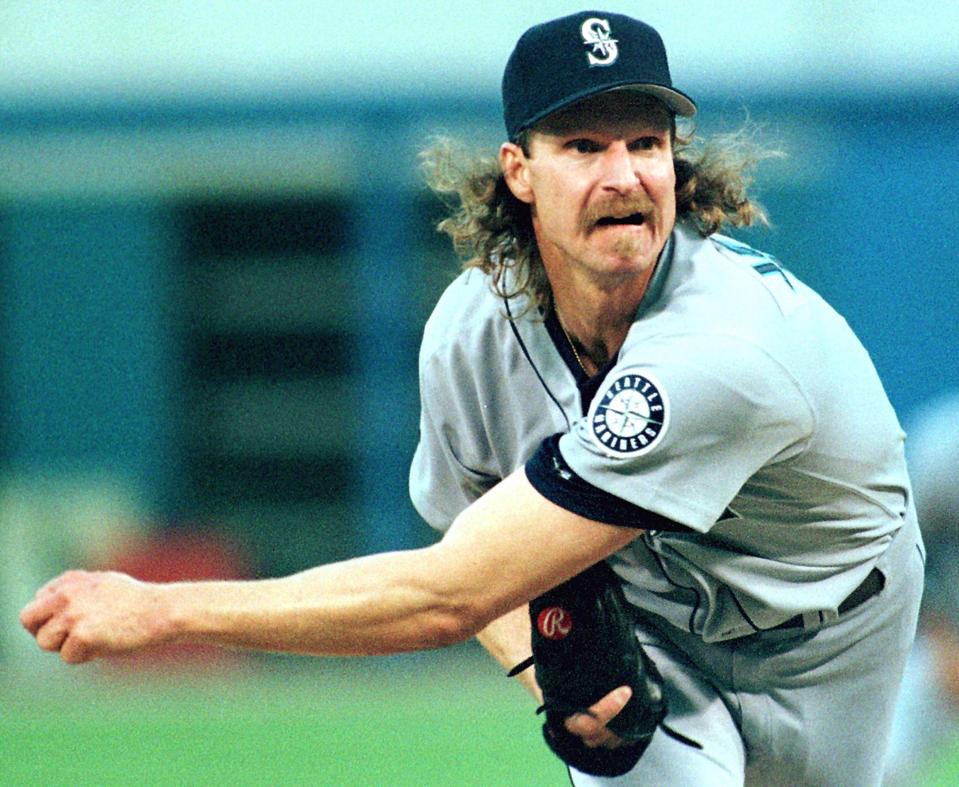 CHICAGO, IL – MAY 14: Seattle Mariners’ ace Randy Johnson follows through on a pitch to the Chicago … [+] White Sox during the second inning of their game at Comisky Park in Chicago, IL. 14 May. Johnson gave up five runs in seven innings and took the loss as the White Sox defeated the Mariners 5-3. AFP PHOTO/ Daniel LIPPITT (Photo credit should read DANIEL LIPPITT/AFP via Getty Images)

If Clemens isn’t the most egregious omission among pitchers, then it has to be The Big Unit. Johnson was easily to most intimidating pitcher in the majors for nearly two decades. The 6’10” lefty hurled 100-plus mph heat through the first half of his career, but evolved into a crafty pitcher with the occasional gas in the second half of his MLB journey.

The 5-time Cy Young winner, Triple Crown winner, former World Series MVP and recent inductee into the Hall of Fame needs to be in the game. 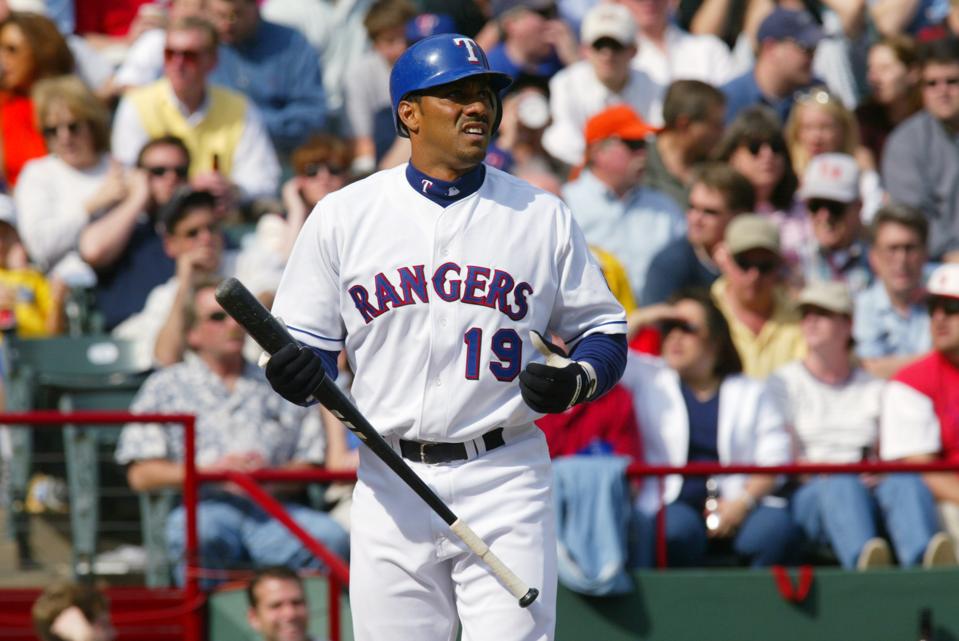 05 Apr 2002 : Juan Gonzalez of the Texas Rangers during the home-opener game against the Anaheim … [+] Angels at The Ballpark in Arlington, Texas. The Angels won 3-1. DIGITAL IMAGE. Mandatory Credit: Ronald Martinez/Getty Images

Igor seems to be one of the most forgotten sluggers of the 1990s. During the decade, he had five 40-HR seasons, led the American League in long balls twice and won 2 MVP awards.

He’s not in the Hall of Fame, and some say that’s because of his inclusion on the infamous list that came from the Mitchell Report. However, there are several players on this list who are already in MLB The Show.

Hopefully, Gonzalez is one of the next guys included.

Fernandez didn’t get a chance to reach his potential. He tragically died at 24 after a breakout season in 2016.

Fernandez is a sentimental favorite of today’s baseball community and a player beloved by most who watched him play. The fireballing right-hander would instantly become a must-have card in DD.

Music Mogul DJ Khaled Cuts The Price On His Miami Mansion By $600,000

Microsoft Knocks Zoom Out Of The Park With...