Breaking
Best Incentive To Get Vaccinated: Money, Messaging, Or...
Page Level Query Analysis at Scale with Google...
How A CIO Can Align IT With Business...
Blogger of the Month: Jo, Girl Eats World
6 Things Women In Business Know That Men...
How to Use First-Party Data for Ad Personalization
Pressing Reset—Putting A Fallen Unicorn Back On Its...
How We Went Viral: Promoting Content with Influencers,...
Blame Olympic Record Price Tag For Return To...
Apple iOS 14.5 Release: Should You Upgrade?
Why Gaming Gear Company Razer Launched A $50...
Technical SEO Implementations to Increase the Impact of...
30 Brilliant Ways to Market Your Eco-Friendly Shopify...
15 Tech Industry Leaders Share Overused (And Misused)...
How to Use Amazon Posts to Promote Your...
U.S. House Passes Bill To Create First Crypto...
Home Business MLB, Umpires Tentatively Agree To New Labor Agreement Through 2024
Business 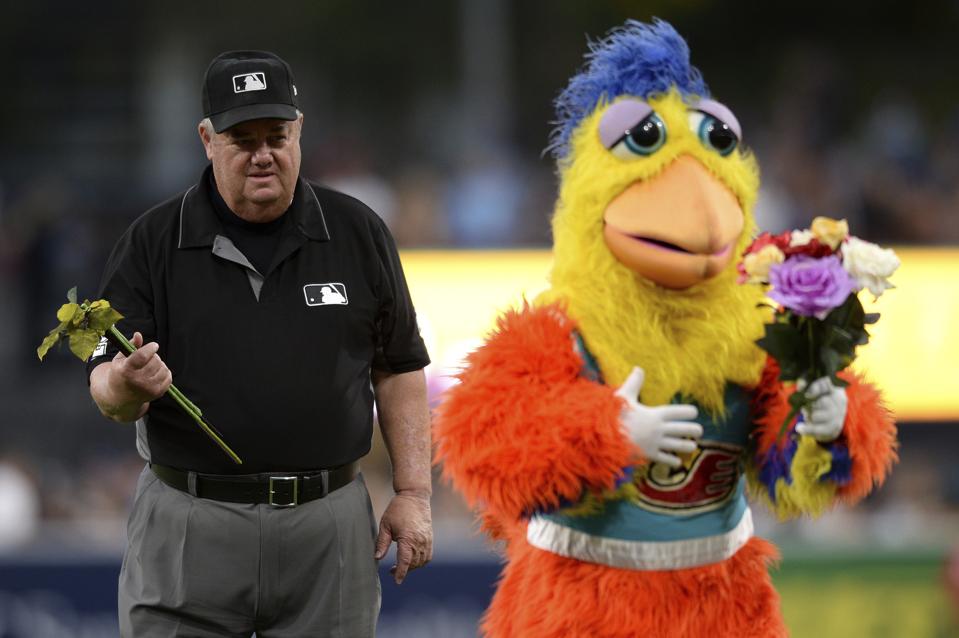 Umpire Joe West, a leaderof the MLB Umpires Association, has had his pranks with the Famous San … [+] Diego Chicken over the years. Here he is this past season after one such prank at Petco Park. (AP Photo/Orlando Ramirez)

Major League Baseball announced a tentative new five-year labor agreement with the umpires Saturday, paving the way for the electronic strike zone to perhaps make its debut at the big-league level sometime before the deal expires in 2024.

The new contract has to be approved by the umpires and MLB’s 30 owners, a process that should be completed sometime in January, the Commissioner’s office said in a statement.

The electronic zone has been tested in the minors — the independent Atlantic League the second half of this past season — and the just-concluded Arizona Fall League campaign, but isn’t ready for prime time yet, an MLB source told Boomskie on Baseball.

MLB has the right to implement it, “but nothing is imminent,” the source said.

And in the new agreement, the umpires have agreed to work with it.

The system will be tested again for several seasons in the minor leagues before making its debut at the big-league level, The Associated Press reported.

The previous labor agreement had expired at the end of the 2019 postseason and a replacement needed to be in place by March 26, the start of the regular season.

Despite rancor and the use of replacement umpires twice in the past, these negotiations with the MLB Umpires Association were short and sweet, coming as MLB readies itself to deal with the players. The Basic Agreement between MLB and the MLB Players Association expires soon after the end of the 2021 season.

The fact is that Statcast and TrackMan are already utilized in the 30 Major League ballparks to evaluate umpires on strike-ball accuracy, so the superstructure for the implementation of the electronic strike zone is already in place.

That grading system is currently used to give umpires assignments in jewel events like the All-Star Game, playoffs and World Series.

This past season, a much more rudimentary system was employed in non-affiliated minor league parks and in the AFL, which plays its games in Arizona spring training facilities. The home plate umpire wore an earpiece and was relayed pitch calls via an iPhone in his pocket connected to the TrackMan system.

The Associated Press reported that MLB may experiment with that same system this coming season in the Single-A Florida State League and move it to Triple-A in 2021 so problems can be ironed out before it’s brought to the Majors.

“It would change the game for the good. It would continue the effort to eliminate human deficiency,” Hall of Famer Mike Schmidt wrote in a story for The Associated Press in October. “We have replay everywhere else in the game. Like it or not, replay gets the call right.”

The plate umpire will still make safe/out calls at home plate, plus judge whether hitters check their swings or if pitches are electronically called strikes even though the ball bounces in the dirt and across the plate.

But just like the now widespread use of instant replay to determine whether a myriad of calls umpires make during a game are correct, the institution of the electronic zone seems inevitable.