Breaking
Florida Supreme Court Tells The American Bar Association...
How to Write Perfect Paid Social Media Marketing...
How To Boost Productivity In Your Small IT...
How Restaurants Can Design a More Sustainable Food...
Expenses That Small Business Owners Need to Be...
How You Can Make Saying Goodbye To The...
Biden To Meet Royal Family At Cornwall’s Eden...
It’s Going To Be Emotional — Going International...
Peer Mentoring For Students: STEM & Buds
7 PR Trends in 2021: The Story So...
Google Plans Radical New Google Pixel Smartphone Upgrade
Where Did COVID Come From?
Ride To Growth With A Business Vehicle
C3.ai’s Tom Siebel: How To Scale AI
Moz Acquired by iContact Marketing Corp
10 Examples of Brands Using TikTok Stitch and...
Home Business MLB’s All-Decade Team For The 2010s
Business 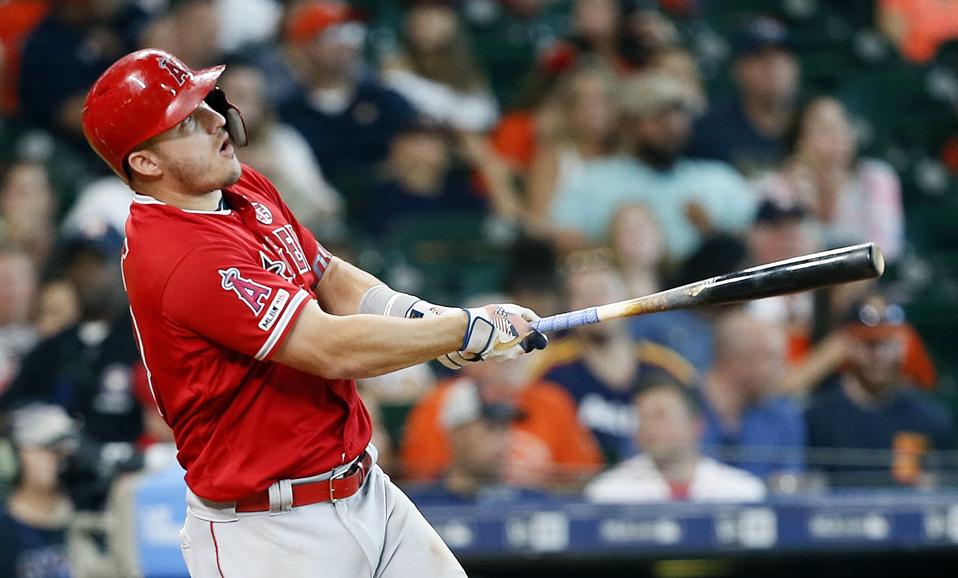 Since he made his major league debut in 2011, Mike Trout has established himself as the best player … [+] in the game. (Photo by Bob Levey/Getty Images)

As the 2010s move inexorably to their closure, there remains ample evidence Major League Baseball has created innumerable moments of brightness as well as times of darkness that have delighted or disheartened its loyal followers over the last 10 years.

By year’s end, we will be focusing on the arrival of a new decade, but before we reach that point, perhaps it would be appropriate to select the top player at each position for the decade of the 2010s.

What players made the deepest impression or had the biggest impact in the game at their position. The only stipulation we’ll have is that to be considered, a player must have played at least five years in the decade at the big-league level.

With that being said, here is one writer’s opinion on the best players at each position from 2010 through 2019.

There were many first basemen who produced outstanding numbers during the last 10 years but none of them were as consistent as Joey Votto. The left-handed, slick fielding first sacker topped all players at his position during the 2010s in doubles (327), hits (1,532), runs (847), batting average (.306), OPS (.944), and outdistanced himself from just about every player with an on-base percentage of .428.

Votto has a career WAR reading 60.2 and during the decade topped all first basemen with a 47.3 WAR.

He is a complete player who has good hands at first base and offensive numbers that put him on a path for the Hall of Fame.

During the last 10 years, Cano and Jose Altuve have been the two best offensive second basemen in the game, but Cano was the superior defensive player and topped all players at his position in almost every offensive category during the 2010s.

Arenado played in only six of the 10 seasons during the decade, but he has dominated his position over the last five years with an explosive bat and ranks as the best defensive third baseman in the game. His defensive wizardry has drawn comparison to the legendary Brooks Robinson as the game’s best gloveman at the hot corner.

No third baseman in the game has had 97-plus runs, 37 or more homers, and at least 110 RBIs the last five consecutive campaigns.

Arenado is simply the best all-around third baseman in the majors.

Lindor just made the five-year requirement and there hasn’t been a better overall shortstop in the game over the last five seasons.

The 26-year old shortstop was born in Caguas, Puerto Rico and continues to get better every season as he approaches his peak years.

Despite playing only half the decade, Lindor already is a four-time All-Star, two-time Gold Glove recipient and Silver Slugger winner, and he was runner-up for A.L. Rookie of the Year honors in 2015.

Lindor is the most complete shortstop in the game and his performance in the last five years of the 2010s put him at the top of the list among players at his position for the decade.

On this All-Decade Team, Yelich will be our left fielder. He is a talented player who can play all three outfield positions and over the last two years has become one of the most electrifying hitters in the game.

Last season, he won his second consecutive N.L. batting crown (.329), finished fourth in homers (44) and ended the year with 97 RBIs—29 behind league-leader Anthony Rendon—despite missing the final month of the season with a fractured knee cap. Had he not been sidelined with injury, he could have challenged for the Triple Crown.

He led the N.L. in batting average, slugging, and OPS in each of the last two years, and in 2019 topped the league in on-base percentage with a career high .429 reading.

At 28, Yelich is approaching his prime years as a player and opposing pitchers will be cautious on how much better he will be in the coming seasons.

There isn’t even a debate on who the center fielder is on the All-Decade Team of the 2010s, is there? Mike Trout is not only the top player at his position, but he is the best player in the game and the face of MLB.

At 28, he already has won three A.L. MVP Awards and finished second in voting four times. He is an eight-time All-Star, seven-time Silver Slugger Award winner, and is the only player in history to win consecutive All-Star game MVP honors.

Trout was the A.L. Rookie of the Year in 2012 and has topped the junior circuit in runs four times, RBIs once, stolen bases once, walks three times, on-base percentage on four occasions, slugging three times, and OPS four times.

Despite missing the first season of the decade and playing in only 40 games in 2011, Trout topped all major league players with 903 runs scored during the 2010s.

There is no question that Betts is the best right fielder in MLB and he played five full seasons in the 2010 decade qualifying him for the ranking as the No. 1 right fielder for the decade.

An outstanding all-around star, Betts was the best right fielder during the 2010s and continues his rise as one of the most exciting players in the game today.

Molina is hands down the top defensive backstop of the 2010s, and his offensive contributions have been just as impressive over the last 10 years.

The Puerto Rican born catcher broke in with the Cardinals in 2004 and from 2010-2019 he was named to eight All-Star teams, won seven of his nine Gold Glove Awards, and led his club to two pennants and one World Series title.

From 2010 through 2019, he averaged 51 runs, 137 hits, 28 doubles, 12 homers, and 65 RBIs per year and was a most valuable contributor to the Cardinals with his leadership not only with the pitching staff, but with every player suited up in a red birds uniform.

Other catchers have been outstanding during the decade with their offensive and defensive contributions, but no backstop has been more valuable to his team than Molina and he achieved that distinction by becoming the best all-around catcher with a path headed to Cooperstown.

Despite playing third base and first base more than he was penciled in the lineup as a DH, Cabrera was arguably the best hitter in the game for several years during the decade as his seven All-Star selections, two A.L. MVP Awards, and four batting titles indicate.

In 2012, he captured the Triple Crown with a .330 BA, 44 homers, and 139 RBIs to become the first Triple Crown winner in 45 seasons. His three consecutive batting titles (2011-2013) made him only the eighth player in MLB history to accomplish the feat—the others are all Hall of Famers—Ty Cobb, Honus Wagner, Rogers Hornsby, Stan Musial, Rod Carew, Wade Boggs, and Tony Gwynn.

For this exercise four starters will be chosen:

The hard throwing right-hander was one of the most dominating hurlers over the last 10 years, leading all pitchers with 161 wins and 2,452 strikeouts during the decade. He also ranked sixth with a 3.12 ERA and second in innings pitched (2,063.2).

Scherzer had several dominating performances during the decade, including two no-hitters, a 20-strikeout game, a 300-K season, a World Series title, and he won three Cy Young Awards.

Kershaw won five ERA titles, including four in succession from 2011-2014—joining Sandy Koufax (1962-1966) as the only pitchers in baseball history to win four in a row.

Like Scherzer and Kershaw, Verlander dominated for most of the decade as he finished with the second most wins (160) and strikeouts (2,260) and fourth best ERA (3.10) among pitchers who worked 1,400 or more innings.

During the 10-year span, Verlander was a six-time All-Star, a two-time 20-game winner, captured a league MVP Award and two Cy Young Awards, finished second in Cy Young voting three times, had eight 200-strikeout campaigns—including a career high 300 in 2019, and he tossed two of his three career no-hitters.

Sale didn’t transform into a dominant starter until 2012 and ever since then he has been one of the best starters in the majors.

To be a dominant closer on a consistent basis is one of the most difficult roles in baseball and to live up to the standard set by Hall of Fame great Mariano Rivera is impossible. But no other reliever is likely to match the marks set by Rivera during his 19 years with the Yankees.

As for the decade of the 2010s, Craig Kimbrel appears to have been the most consistent and reliable late-inning specialist in the majors. He topped all closers with 346 saves and Kenley Jansen was the only other reliever to reach 300 saves during the decade with 301.

He led the N.L. in saves during his first four full years in the majors and captured Rookie of the Year honors in 2011 with the Braves when he saved 46 games and posted a 2.10 ERA while fanning 127 batters in 77 innings.

Four times he finished a season with 35 or more saves and an ERA of 1.61 or lower. Kimbrel has saved 31-plus games in each of his eight full seasons—the only years he did not save 30 were his first year in 2010 when he pitched only 20.2 innings after being called up late in the year, and last season when he signed late and suffered injuries that limited him to only 23 appearances and 20 innings.