Every February, the beautiful city of Barcelona is taken over by throngs of journalists, phone manufacturers, dealers and salespeople. It’s for the biggest cellphone trade show in the world, Mobile World Congress (MWC). 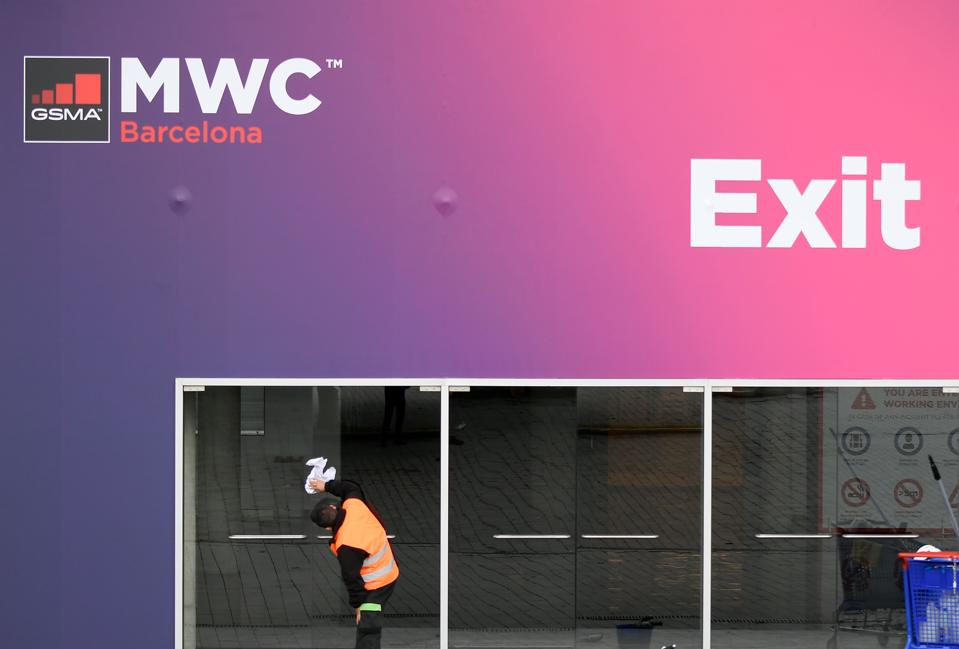 A worker cleans glass doors at the Mobile World Congress MWC venue on February 12, 2020 at the Fira … [+] Barcelona Montjuic centre in Barcelona. – Organisers of the World Mobile Congress said on February 12, 2020 that the world’s top mobile trade fair would be cancelled following an exodus of industry heavyweights over coronavirus fears. (Photo by LLUIS GENE / AFP) (Photo by LLUIS GENE/AFP via Getty Images)

You can’t get a decent hotel room unless you book a year ahead. As you check out, you say, “Can I have that room again next year?”

But this year is suddenly different. The coronavirus, Covid 19, has meant that one by one, companies starting to drop out of exhibiting at Mobile World Congress.

LG went, then Sony, Intel and HMD Global, makers of Nokia Mobile handsets. Although some companies like Huawei and Oppo were defiant that they were still going, thank you very much, things finally changed today. The GSMA, organizers of Mobile World Congress, today announced the show’s cancelation. In a statement, they said:

“With due regard to the safe and healthy environment in Barcelona and the host country today, the GSMA has cancelled MWC Barcelona 2020 because the global concern regarding the coronavirus outbreak, travel concern and other circumstances, make it impossible for the GSMA to hold the event.”

It’s a serious decision. It’s especially a big thing for the smaller companies involved. As Ben Wood, analyst extraordinaire at CCS Insight points out, “The impact on small companies who have invested a disproportionate amount of their budgets and time on this event should not be under-estimated. MWC is an anchor event for many and now they face the challenge of having to figure out what the best way to salvage something from this difficult situation.”

But there’s an upside.

The problem for everybody about MWC is that, well, it all happens at once. On Sunday, February 23, major phone companies, one after another, announce their new special products. It’s hard to make yourself heard above the noise, though usually Nokia manages with its newly revived classic phones, for instance.

Samsung cleverly avoided the issue by revealing its latest phones and earbuds this week instead of at Barcelona, of course.

But now, every company has the same freedom. Sony will be holding its press conference online only, so is sticking to the same schedule, but other companies now have the luxury of announcing their products exactly when they want to, not because there’s a shindig in Spain.

HMD Global has said, “We believe the prudent decision is to cancel our participation at Mobile World Congress and want to express our sincere thanks to the GSMA and other authorities for their tireless efforts to address the challenges resulting from Covid-19, and they have our full support as they move forward.  We will update the media, our partners and customers on a new timeline for our product announcements.”

Suddenly, HMD Global and others can grab the limelight when they want, and get their message across more directly.

Of course, the absence of the event is important, and as Ben Wood says, “The GSMA now needs to be careful that there is not a knock of effect from this year’s cancellation. Major companies and many attendees will be reviewing the importance of MWC to their business and the GSMA must work hard to have a clear path forward. This is particularly true for smaller business that have had to swallow many of the costs from this year’s show.”

The most important thing about today’s announcement is that the uncertainty of the situation is resolved. And everyone can prepare for what they do next.

Meantime, there are some great hotel rooms in Barcelona that are suddenly available, which is another plus, right?

Authenticity During Black History Month – Some Brands Make The Mark, While Others Criticized In Digital Backlash

It’s Not All Black And White: Melanism In...