Home Business More Foes Than Ever Before, But Volkswagen’s Hatchback King Of The World Is Fighting Back
Business

More Foes Than Ever Before, But Volkswagen’s Hatchback King Of The World Is Fighting Back 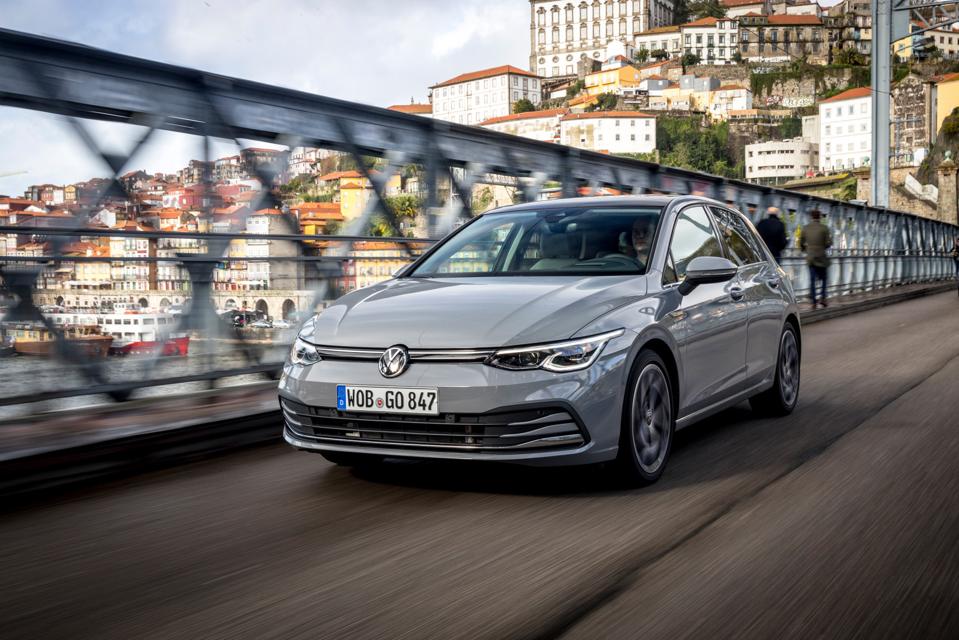 Volkswagen’s Golf Mark 8 combines a sparkling chassis with all of its new digital interior … [+] technology.

The US news was ablaze with Presidential impeachment hearings when the first Volkswagen Golf was launched in 1974 and it’s happening all over again for the Golf Mark 8.

In between, the Golf badge has had brilliant and dead-ordinary iterations, and has been bought 35 million times in 45 years.

But there’s never been another Golf like this all-new one, the Golf Mk 8. It has arrived in the shadow of storming rivals, like Ford’s Focus and the Mazda3, plus in-house clean dreamers like Volkswagen’s ID.3 electric car.

It needed to deliver, hard, and it has. A first drive of the eighth generation of the world’s favorite hatchback in Portugal has revealed the Golf has not only built on its traditional strengths, but also found a whole bunch of new ones.

And, in short, the best hatchback in the world heard the footsteps behind it and set about getting a whole lot better, launching the bar high into the air rather than simply raising it.

It’s initially obvious, with more aggressive and sporty headlights than the traditional stodginess of a Golf, and it continues into the interior, where there is hardly a button to be found in a newly digital world.

It’s the first car in its class with Car2X WiFi technology, connecting it to emergency vehicles and traffic infrastructure to alert drivers of oncoming problems, but it doesn’t end there.

The buttons on the steering wheel are almost the only ones you’ll find in the Golf Mk 8, because even the audio volume and air-conditioning temperature controls live on digital sliders.

Almost everything else is controlled by the 10-inch touchscreen in the middle, which is now thankfully at the same level as the fully digital instrument cluster in front of the driver.

It’s a move that could have left the Golf’s interior feeling flimsy and brittle, with black plastic surfaces everywhere, but it’s somehow enhanced it’s junior-premium standing.

It goes further underneath the car, though. The least obvious stuff is where the new Golf shines.

Volkswagen’s engineers took the aluminum subframe out of the rare Clubsport S Golf and fitted it across the board with the Golf Mk 8 to create a car that handles crisply and enjoyably, without losing the stolid assurance Golfs have always had.

It isn’t an all-new car, though. Instead, it rides on an updated version of Volkswagen’s ubiquitous MQB architecture that sits beneath eight million cars a year.

But those updates have been precise and astonishingly effective, delivering a car that’s crisper, more accurate, with more nuanced steering and a more secure, confidence-inspiring front-end, while it even improves the ride quality.

There are cheaper versions of the Golf, fitted with standard, linear steering systems and beam rear axles, but our test didn’t include any of those.

Instead, all the cars we tested had MacPherson Strut front ends and multi-link rear ends, plus the optional adaptive dampers and direct steering, both of which open up an entirely new world to the Golf Mk 8.

The car now corners with alacrity and even fun, tempting the driver into pushing it harder and even putting a smile on your face doing it.

There is little body roll and what there is feels as though it shifts across in a linear way, rather than up and over. It just inspires confidence and smacks of a wonderfully integrated machine.

It’s a wonderful highway cruiser, too, and it’s untroubled by bumps or crosswinds, and it retains its assured composure around town and over bumps.

Our test involved the 2.0-liter turbodiesel, but we focused on the 1.5-liter, four-cylinder turbo gasoline engine.

The in-line four has a modest 250Nm of torque to aid its 110kW of power, but it adds a 48-Volt mild-hybrid system to give it electric punch down low, where it needs to move in a hurry.

It’s a sign of the times at Volkswagen and the Golf Mk 8 will have five hybrid models, including a pair of plug-in hybrids with around 45 miles of pure EV running.

The motor is very smooth and the boost from the integrated starter-generator and its 48-Volt lithium-ion battery means it always feels willing and enthusiastic – far more so than the number suggest.

There is strength from idle, even though the gasoline motor’s torque only peaks at 1500rpm, and it spins happily out to 6400rpm.

That’s enough to send it to 62mph in 8.5 seconds and on to a 140mph top speed, but the way it does it always feels quicker than the numbers indicate.

And, if nobody told you there was an electric motor boosting things along, you’d never know because it’s utterly seamless in its integration and the way it cuts in and out.

And it works just as well with the six-speed manual gearbox as it does with the effortless seven-speed dual-clutch transmission.

It’s quieter and more flexible, too, reaching 100km/h in 8.8 seconds but adding weight to the 1384kg petrol version (though Volkswagen was vague on exactly how much weight).

For all of its new technology, sitting in the driver’s seat of a Golf Mk 8 will seem eerily familiar to anybody who’s ever driven a Golf.

The seating position is just about right, there is a good range of fore-aft movement for the seat and the switchgear (what little there is) just works.

While the Innovision (that’s the Volkswagen word for its digital screen tech) could have fallen over, it works far more intuitively than we could have imagined.

It’s a better interpretation of what a driver needs than in the Touareg, where it can sometimes lead to five or six taps on the screen to get things done.

The Golf Mk 8 has short cuts and more tiles, rather than the Touareg’s fewer tiles and more steps, and we’d found out how to do just about everything by ourselves in 10 minutes.

Even so, the touchscreens don’t dominate like you’d imagine and they instead seem to seamlessly belong to the Golf, though they’re not quite at the A-Class’s level.

The Golf Mk 8 is clearly aimed at younger buyers, and the 10.3-inch instrument cluster can be switched between four views that can also be tailored inside their standard layout.

And yet, it’s not as intimidating for older buyers as we’d have imagined and the voice-control system is easy enough to use for anybody not comfortable being distracted by touchscreens.

There’s a full-time SIM cars in it, too, and it’s always connected to the internet so it can stream traffic information in real time, as well as music.

There’s more. The driver assistance systems are not only comprehensive, with adaptive cruise control, lane-keeping assistance and autonomous emergency braking combining for a no-hands experience at up to 130mph, and it has Car2X to help it even more.

There’s the feeling of extra space in the cabin, though it doesn’t really have any (because it’s on the same wheelbase as the Golf Mk 7), though it’s a little more than an inch longer overall.

Part of that is down to a new, stubby gearlever for the dual-clutch models and larger center consoles, and the ambient lighting and head-up displays work beautifully, too.

It’s astonishing how Volkswagen has turned its staid, possibly even stolid hatchback into something that is now genuinely a car for all people.

The surprise wasn’t the huge leap in interior technology, because that punch had been telegraphed as far back as the Touareg launch early last year.

It’s not even the powertrains that are cleaner on the tough, new, real-world European test, and more flexible thanks to mild-hybrid tech.

No, the surprise comes from the chassis, which has elevated the Golf Mk 8 to a level no Golf has ever aspired to, much less achieved.

And, once again, it has put a comfortable distance between itself and its challengers.

These Great Companies Are Standing Up To COVID-19...

Brewers Fill Catching Void On The Cheap By...