Breaking
Growing Your Retirement Money Using 401(k) Dollar-Cost Averaging
Wellness Exec Abby Miller Levy Partners With Venture...
Microsoft Teams Issues Strike To Zoom With Tidal...
What’s Coming For The S&P 500 In October
4 Ways You Can Showcase Empathy With Your...
A $22,000 Microsoft Surface Will Soon Be For...
Zooming In – Should SMEs Invest In The...
iOS 14: The Surprising Security Risk Of Sharing...
How A Break From Lord Sugar Changed The...
Sunday’s Google Doodle Is Actually About Google
Office Of The Comptroller Of The Currency Chief...
Source Code For Multiple Windows Operating Systems Publicly...
Why Forgettable Pfizer Really Is A Great Value...
Hot For The Holidays? Amazon Home Drone, Kid...
Best Small Business Loans
The FAAMG Stocks Drive The Markets
Home Business Most Americans Don’t Think The Election Will Be Conducted Fairly, Poll Finds
Business

Most Americans Don’t Think The Election Will Be Conducted Fairly, Poll Finds

A slim majority of Americans are not confident that the election in November will be conducted “in a fair and equal way,” a new NBC News/SurveyMonkey poll conducted August 3-9 finds, reflecting fears on both sides of the aisle as President Donald Trump ramps up his attacks on mail-in voting and the U.S. Postal Service and Democrats raise concerns about Russian interference. 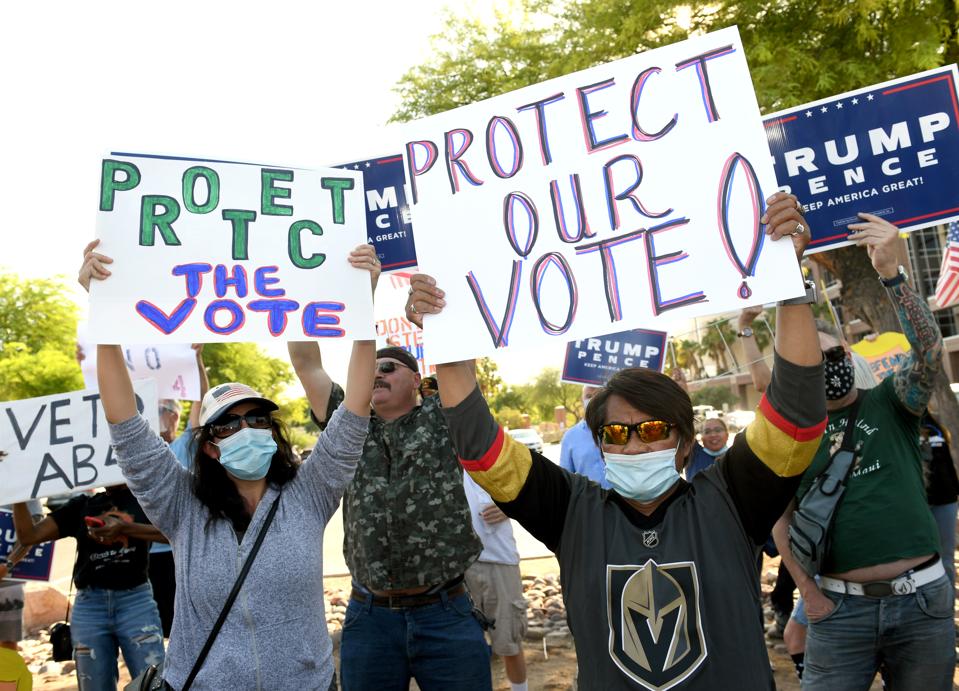 People including Romeo Jacinto (R) of Nevada protest against the passage of a mail-in voting bill on … [+] August 4, 2020 in Las Vegas, Nevada. (Photo by Ethan Miller/Getty Images)

55% of Americans overall said they were “not too confident” or “not at all confident” that the election will be conducted fairly, including 65% of Republicans, 56% of Independents and 46% of Democrats.

The same slim majority, 55%, also say they will likely vote by mail in November and support changing election laws to give all voters the option to vote by mail.

Mail-in voting is most popular among Democrats: 86% support changing laws to bolster mail-in voting (including 64% who strongly support), and 79% are very or somewhat likely to vote by mail in November.

Trump’s attacks on mail-in voting have appeared to resonate with Republicans: 76% oppose mail-in voting laws (62% strongly oppose), and only 33% say they’re likely to vote by mail.

Trump has falsely claimed that mail-in voting will lead to widespread voter fraud—which is in actuality extremely rare—and he and the Republican National Committee have launched a $20 million legal effort to curb mail-in voting, as well as reportedly explored potential executive actions.

Democrats and intelligence officials have recently raised alarms about Russian interference in the election, and Democrats have speculated in recent days that Trump is attempting to undermine the U.S. Postal Service ahead of a mail-based election via new Postmaster General Louis DeJoy, whose new policies at the agency have resulted in reported widespread mail delays.

75%: The approximate percentage of Americans who will be eligible for mail-in voting in November—the most in U.S. history—according to a New York Times analysis published Tuesday. The widespread access could result in 80 million mail ballots, the Times projects, more than twice as many as were sent in 2016.

The NBC poll is in line with recent other polls that show Trump’s mail-in voting attacks are landing with his GOP supporters, though not Americans at large. A Politico/Morning Consult poll last week found support among Republicans for vote by mail decreased by 11% between April and August, and 57% of Republicans believed mail-in voting should be limited “because it jeopardizes election security.” But Republican officials are reportedly afraid that Trump’s repeated mail-in voting attacks could have an unintended negative impact, potentially suppressing voter turnout among GOP voters who believe mail-in voting is subject to fraud but don’t want to vote in person amid the pandemic. A number of Republican governors and other state officials have spoken out in favor of mail-in voting in recent days, contradicting Trump by insisting the practice in their states is secure. Trump himself also somewhat backtracked on his attacks August 4, claiming that he has “total confidence” about mail-in voting in Florida—a key swing state—because the state is “different from other states” due to its Republican leadership.

Poll: Most Americans are not confident the 2020 election will be conducted fairly (NBC News)

‘It Will Work’: Republican Governor ‘Comfortable’ With Mail-In Voting Despite Trump Attacks (Forbes)