Breaking
Growing Your Retirement Money Using 401(k) Dollar-Cost Averaging
Wellness Exec Abby Miller Levy Partners With Venture...
Microsoft Teams Issues Strike To Zoom With Tidal...
What’s Coming For The S&P 500 In October
4 Ways You Can Showcase Empathy With Your...
A $22,000 Microsoft Surface Will Soon Be For...
Zooming In – Should SMEs Invest In The...
iOS 14: The Surprising Security Risk Of Sharing...
How A Break From Lord Sugar Changed The...
Sunday’s Google Doodle Is Actually About Google
Office Of The Comptroller Of The Currency Chief...
Source Code For Multiple Windows Operating Systems Publicly...
Why Forgettable Pfizer Really Is A Great Value...
Hot For The Holidays? Amazon Home Drone, Kid...
Best Small Business Loans
The FAAMG Stocks Drive The Markets
Home Business Most Americans Think U.S. Is Handling Coronavirus Worse Than Other Countries—Despite Trump’s Claims
Business

Most Americans Think U.S. Is Handling Coronavirus Worse Than Other Countries—Despite Trump’s Claims

Nearly two-thirds of Americans believe the U.S. is handling the Covid-19 pandemic worse than other countries, according to a new NPR/Ipsos poll released on the same day President Donald Trump downplayed the U.S.’s poor worldwide standing on Covid-19 in a new interview and claimed the U.S. is doing better “than the world” in “numerous categories.” 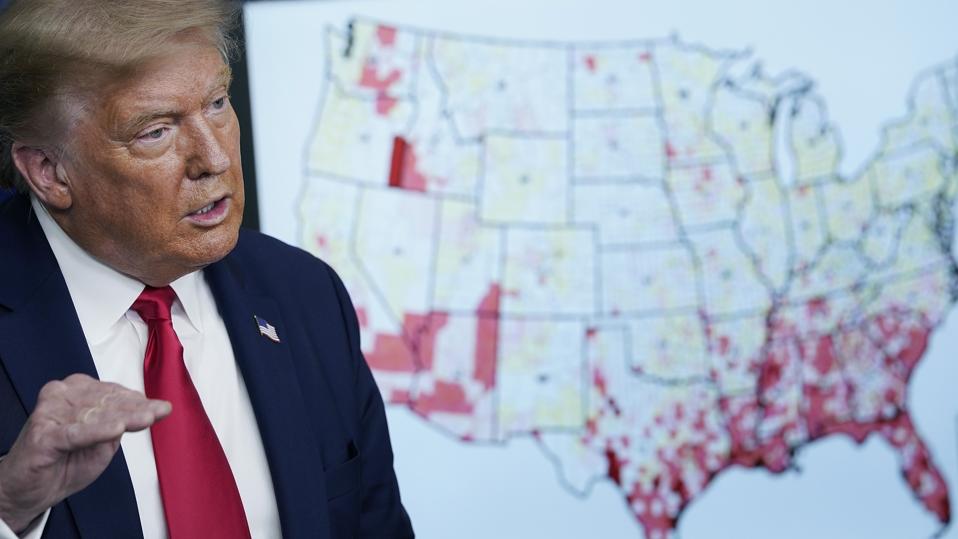 President Donald Trump speaks during a news conference about his administration’s response to the … [+] ongoing coronavirus pandemic at the White House on July 23, 2020 in Washington, DC.(Photo by Drew Angerer/Getty Images)

67% support a nationwide Covid-19 strategy, which Trump said in July—more than four months into the pandemic—that his administration was “in the process of developing”, and most Americans support a single national strategy for reopening schools and businesses.

Trump—whose comments on the pandemic are distrusted by a majority of Americans,  other polls have found—downplayed the U.S.’s poor worldwide standing in Covid-19 cases and deaths in an interview with Axios released Monday night, falsely claiming it is only because the U.S. is “so much better at testing than any other countries in the world.”

A majority of Americans support strong measures to slow the spread, including government funding to expand free Covid-19 testing (85%), state laws requiring wearing a mask “in public at all times” (76%), a temporary ban on interstate travel (55%) and federal funding for manufacturing personal protective equipment and testing supplies and distributing an eventual vaccine to all Americans (83%).

59% support a mandatory shelter-at-home order for two weeks, and the same percentage believe the government should provide Americans with a stipend to make that possible.

“United States is lowest in numerous categories. We’re lower than the world, we’re lower than Europe,” Trump told Axios’s Jonathan Swan. When Swan pointed out that he was “talking about death as a proportion of population,” where “the U.S. is really bad” compared with countries like South Korea and Germany, Trump responded, “You can’t do that.”

The support for increased Covid-19 measures comes as Americans have broadly resisted  rushed measures to reopen the country, with polling throughout the pandemic finding that a majority support lockdown measures and are afraid of the country reopening too soon. Those views, however, stand in stark contrast to much of the messaging by Trump and his Republican gubernatorial allies. The president has declined to impose a nationwide lockdown and openly called to “slow the testing down,” while GOP governors in hard-hit states have resisted reimposing lockdowns—and, in some states, mask-wearing mandates—amid rising case counts. Experts have pushed for reimposing lockdowns as cases have surged, with more than 150 medical experts and other professionals urging the government in July to “shut it down now and start over” by implementing stay-at-home orders and banning interstate travel. “If you don’t take these actions, the consequences will be measured in widespread suffering and death,” the signatories wrote.

Medical Experts Tell Government: ‘Shut It Down Now, And Start Over’ (Forbes)

For Medicare, Having A Power Of Attorney Is Not Enough