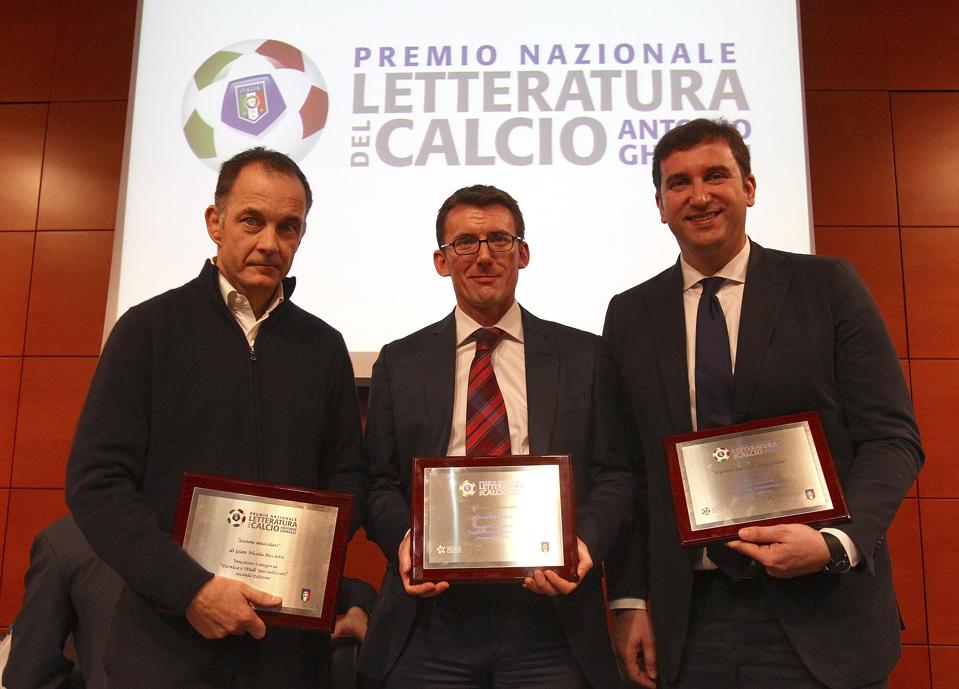 This is the first in an occasional series of favorite soccer books.

Jonathan Wilson is one of soccer’s most articulate, productive and insightful writers. He attended Oxford University studying English and over the years he has written for a number of newspapers and soccer magazines. He writes a weekly column for The Observer and is a regular guest on the Guardian’s “Football Unlimited” podcast. In 2012, the Football Supporters Federation voted Wilson the Football Writer of the Year.

Almost a decade ago, Wilson founded “The Blizzard” a quarterly long-form publication that he continues to edit. His first book was published in 2006 and since then he has written ten more. You can follow Jonathan on Twitter @jonawils.

#1 Inverting the Pyramid: The History of Football Tactics (2008)

This is probably Wilson’s best-known book. It illustrates how soccer tactics have evolved since the game’s inception, and the people behind the ideas that changed the way the game is played.

Wilson delves into how soccer conquered the world, the people who acted as “missionaries” and how the social fabric of many countries influenced styles of play.

Intertwined with the changes in “team-shape” and styles, Wilson examines how the roles and responsibilities of positions have changed over the years. He looks at how some countries embraced new ideas while others stuck with older notions until they were forced to dump their old ideas.

The willingness to experiment and to tweak new formations and approaches was critical in the evolution of the game but finding the right players to implement the ideas was also super important. He takes time to showcase some of these players whose skill-sets matched the need. 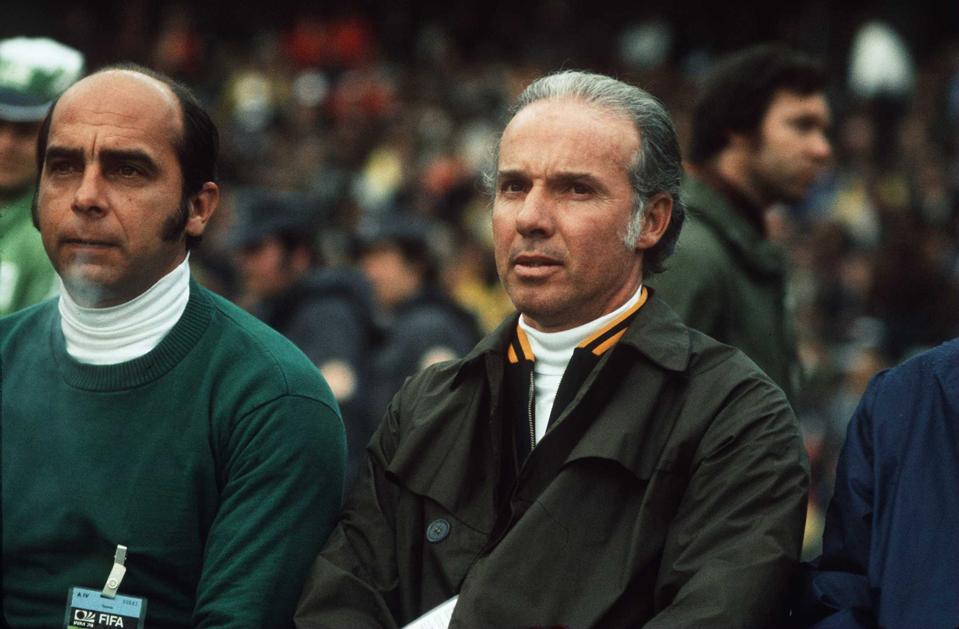 Mario Zagalo a 4-time World Cup winner with Brazil and the man who, as a player, turned 4-2-4 for … [+] Brazil into 4-3-3 (Photo by Peter Robinson/EMPICS via Getty Images)

Sometimes the changes were a response to rule changes e.g. offside rule in the 20s and the no pass back change in 90s. But more often it was forward thinking coaches in charge of underdog teams who needed to find a way to match or beat stronger teams by the clever use of resources.

Credit to Wilson for digging deeply into the history of the game and recognizing the coaches who were often the genesis for ideas that were then adopted and built on by others.

“Inverting the Pyramid” was shortlisted for the 2008 William Hill Sports Book of the Year and won the “Best Football Book” award a year later at the British Sports Book Awards.

#2 The Names Heard Long Ago: How the Golden Age of Hungarian Soccer Shaped the Modern Game (2019)

I read this book as 2019 was ending and it became my favorite Wilson book and perhaps my favorite football book of all time.

For younger fans it might seem odd that someone would write a book about Hungarian soccer given that the national and club teams have been also-runs for the last half-century or more.

Don’t tell England, but for many decades Hungary was the soccer world’s hub. Wilson spends time describing how Hungary embraced ideas of how the game should be played. Hungarian – and the odd Austrian – coaches then evolved these ideas and, in turn, spread the “new gospel” across the globe. 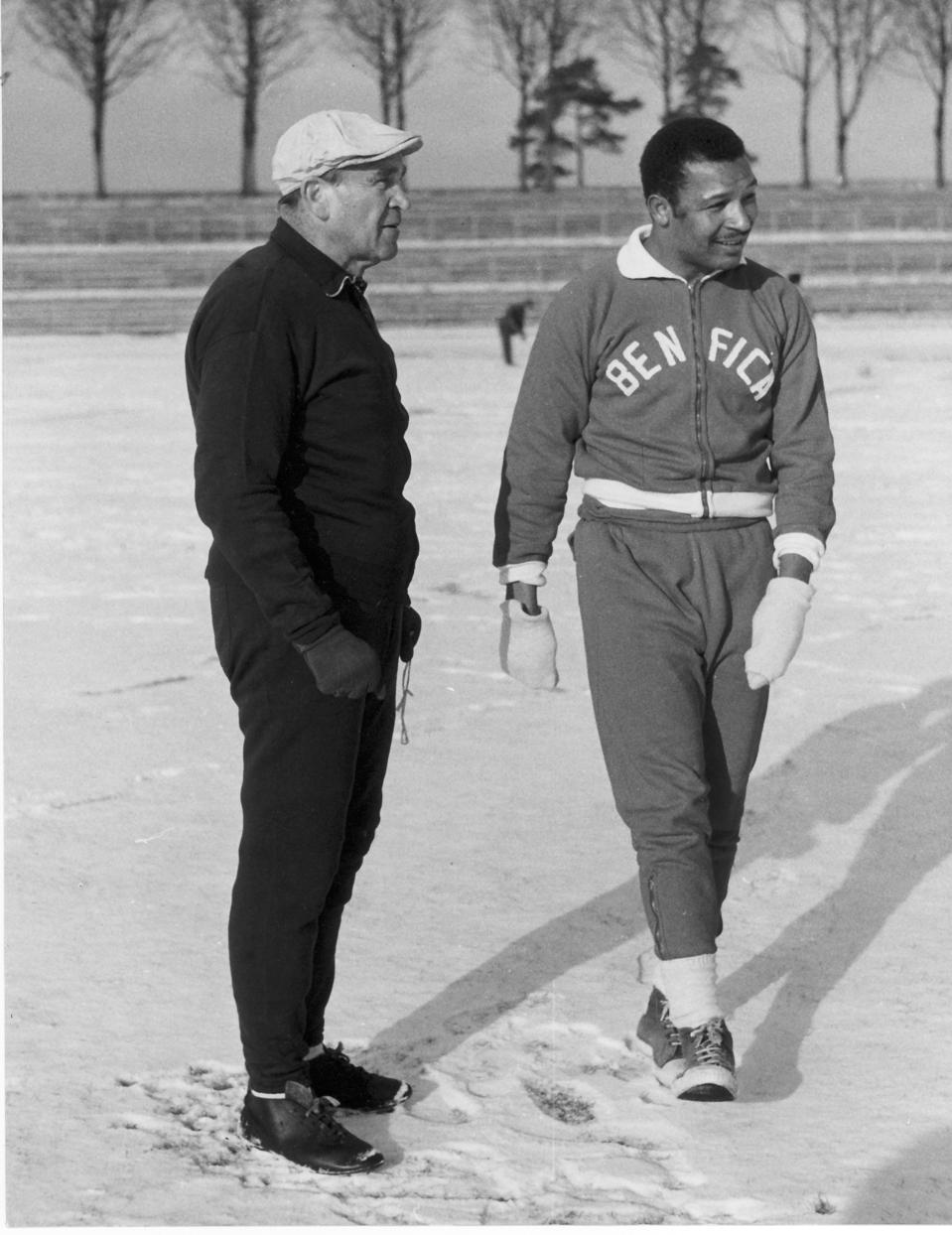 Bela Guttmann, during his time with Benfica. Guttmann was one of the many Hungarian coaches who took … [+] their skills around the world. (Photo by Karl Schnörrer/picture alliance via Getty Images)

There have been books written about the Magnificent Magyars of the 40s and 50s. However, Wilson’s book differs in that he takes us through the decades leading to the creation of the team that many consider, with good reason, to be the greatest never to have won the World Cup.

All of this is done within the context of politics, religion, the dynamics of a dysfunctional empire and two World Wars.

#3 Behind The Curtain: Travels in Eastern European Football (2006)

This is the first book written by Wilson and it has a “Lonely Planet” feel to it as he document’s his travels in eastern Europe. Wilson travels through the Balkans, Hungary, the Caucasus states as well as Russia, Ukraine, Poland and others documenting and assessing the changes to the game since capitalism replaced communism.

It is 14 years since this book was published but it is doubtful that things have changed for the better. Even though it maybe dated, there is still more than enough soccer history in the book to satisfy the reader.

#4 Angels With Dirty Faces: The Footballing History of Argentina (2016)

Before this book was written, I had often wondered why the history of Argentine soccer had not been a subject for English-language writers. Books about Brazil are aplenty, but Argentina had been ignored, to my knowledge.

That void has now been more than adequately filled. Wilson mines a deep vein of soccer history, culture and politics to write a compelling book.

Argentina has produced three of three of the greatest players ever to play the game – Di Stefano, Maradona, Messi – but Wilson introduces us to other key figures from the introduction of the game by Scots through to the present day. 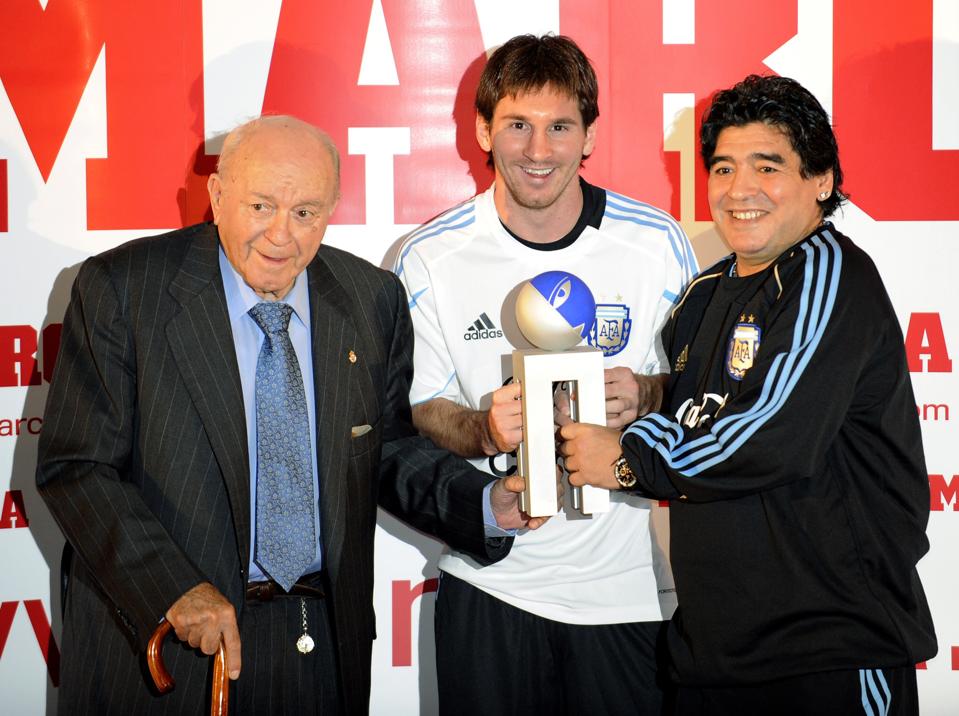 For those of us of a certain age, Argentina represented the bad guys of world soccer for many years.

There was the infamous Rattin incident at the 1996 World Cup when the Argentine captain refused to leave the field when he was sent off against England. The Battle of Montevideo came a year later between Racing and Celtic. Racing started it but in the third game Celtic was finally provoked to the point of no return.

Manchester United was the victim of a brutal Estudiantes team in 1968 and the following year the entire Estudiantes team was arrested by the order of the Argentine president for assaulting Milan players.

How a country can produce such great players and yet allowed such brutal win-at-any-cost teams to prosper is just some of the yin and yang explored by Wilson.

There is no shortage of books about Brian Clough, and many are excellent. But Wilson shows there is always room for another. Not one to drop in a quip without explaining the context and background Wilson’s biography ticks all the right boxes.

Rather than focusing primarily on Clough’s years as a manager, this book takes us through his entire life. It is easy to forget that Clough was an outstanding striker whose career was cut short by a knee injury at age 27.

The injury came just six months after was left out of the 1962 World Cup squad by manager Walter Winterbottom. During his playing career he scored 267 goals in 296 games and was capped twice for England.

Wilson does a wonderful job of describing Clough’s playing days and his meeting up with Peter Taylor while playing for Middlesbrough. From there it is on to Clough and Taylor joining up to manage lowly Hartlepool, and then success at Derby County. 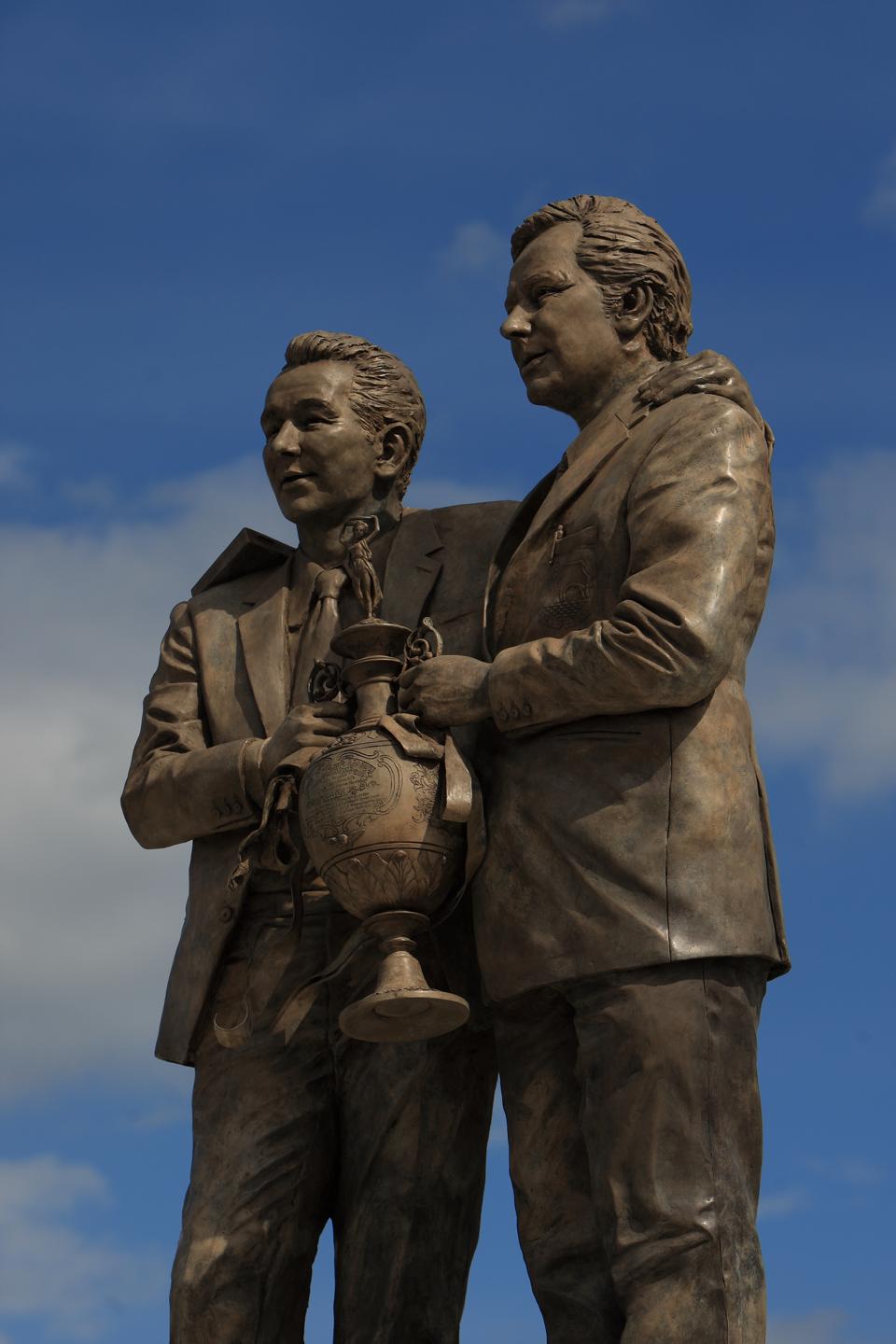 It’s easy to focus on Clough – and Taylor’s – successes with Derby and Nottingham Forest but Wilson also takes us through the many public setbacks and controversies. Derby and Forest book-ended traumatic failures at Brighton (Third Division – what was he thinking?) and his infamous 44 days at Leeds.

Clough’s long-running feud with Leeds United’s Don Revie is covered very well as is his eventual falling out with Peter Taylor – something Clough regretted.

Reading of Clough and Taylor’s achievements with Derby and Nottingham Forest isn’t the same as living through that time, but overall, Wilson does a dam fine job of it.

Other Books by Jonathan Wilson

Want To Be An Entrepreneur? 10 Questions To Ask Yourself Before Committing

Donald Cerrone Is The Safest Opponent, But What...