A Croatian fishing vessel netted more than it bargained for when it pulled part of a U.S. underwater system out of the Adriatic. The Marian II was trawling at depths of 460 feet when the snared the mystery object on January 6. The device, weighing about 220 lb, was hauled up onto deck. The crew, and local media could only speculate what it was. 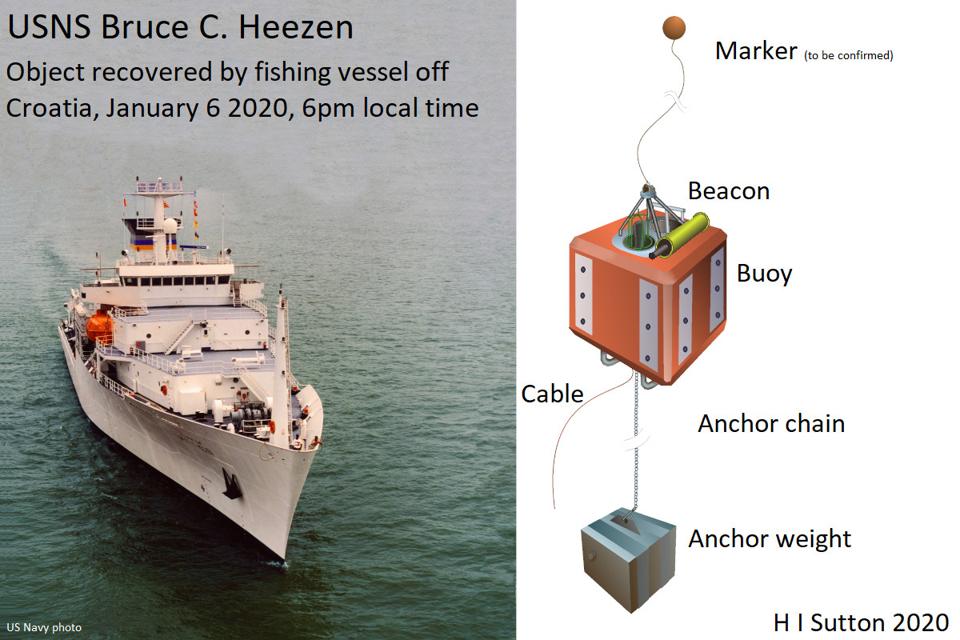 The mystery object was handed over to the crew of the US Naval Service’s Oceanographic survey ship … [+] USNS Bruce C. Heezen.

The object consisted of a square orange buoy with what appears to be a beacon on top, and an anchor underneath. Aside from not knowing its function, the captain, Darko Kunac Bigava, did not know who it belonged to. It had no national markings. When the owner was finally established, it was handed back to the US Naval Service vessel USNS Bruce C. Heezen.

There was a cable attached but it was not connected to anything. This raises the hypothesis that the object may have accidentally fallen overboard from USNS Bruce C. Heezen. We know from open source ship tracking that she conducted a search pattern nearby the previous day. Or perhaps whatever it was to be connected to had not yet been connected.

An interesting twist is that the device, or at least the buoy part, had been couriered into Croatia from Stennis Space Center, Mississippi. It appears to have left on a flight from Louis Armstrong New Orleans International Airport in November 2019. We know all this because the DHL tracking stickers were still attached. The device was labelled as a “Qube with releases”. On the upper edge of the buoy itself someone had written “TC-2” in marker pen.

So is it a NASA device related to a space program? Part of a satellite for example?Probably not. The Stennis Space Center is a NASA facility best known for testing the massive rocket engines involved in space exploration. Less well known however, it is home to several naval units. The Naval Meteorology and Oceanography Command (NAVMETOCCOM) runs the Naval Oceanography Program. And the Naval Oceanographic Office (NAVOCEANO) carries out the work. So it is a safe bet that the mystery device belongs to NAVOCEANO rather than NASA. And perhaps not surprisingly the USNS Bruce C. Heezen is part of the NAVOCEANO force.

The USNS Bruce C. Heezen is an oceanographic survey vessel of the Pathfinder Class. Local media report that it was operating with the permission of the Croatian government. Croatia is a U.S. ally and has been a member of NATO since 2009.

The 7 Pathfinder Class are among the least noticed of the US Navy’s assets. Yet they provide valuable scientific capabilities. Ordinarily the Pathfinder Class use a towed device called a ‘towfish’ to map the sea floor. The towfish uses precision multi-beam wide-angle sonar. This is used to produce accurate charts which could provide a tactical advantage to U.S. Navy warfighters.

The class has had incidents with its devices before. In December 2016 Heezen’s sister ship, USNS Bowditch, had one of its underwater drones briefly seized by China. The ‘Ocean Glider’ was possibly gathering oceanographic information which could be of value to submarine operations and anti-submarine warfare. The mystery device lost off Croatia may have a similar role.

So this mystery object may not but NASA space technology, but it does play a secretive role in the U.S. Navy’s strategic advantage.

Leadership Conferences To Attend In 2020

You Can Have My Old Business That Makes...