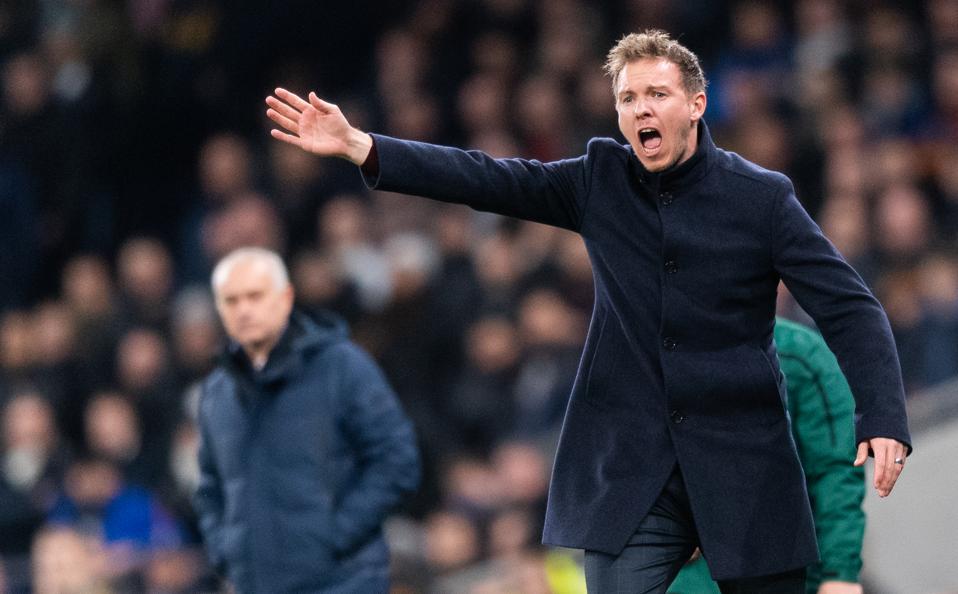 This might have been Julian Nagelsmann and RB Leipzig’s first-ever home knock-out tie in the Champions League, but you would not have known it from the confidence and security with which they played in eastern Germany against Tottenham on Wednesday night. Instead it was Spurs that looked like the rabbit in the headlights; passive, frightened by the power, pace and precision of their adversary.

For José Mourinho, it must have been a chastening experience. Here was a man who is supposedly a specialist in this competition, and in knock-out football more generally, against a manager in his first tie at this level. Nagelsmann has been referred to in the past as the “mini-Mourinho”, and if that is the case, then this was a clear sign that the apprentice has superseded the master.

Nagelsmann’s team had already shown in the first leg that they were better-organised, slicker and sharper than Spurs, winning 1-0 in north London. Here, they rammed the point home in no uncertain terms.

This season Leipzig have used a variety of formations, but their underlying philosophy remains unchanged. Their attacks are swift and follow clear, pre-defined patterns. When they lose the ball, they aim to win it back within eight seconds, turn the opposition around and shoot as soon as possible. It is an approach that comes down from the Red Bull group’s sport and development manager Ralf Rangnick and is embraced by the head coach.

But there was still a sense going into this game, emanating from the little bit of the Mourinho aura that refuses to fade entirely into the annals of history, that Spurs might be able to do something, anything to turn the tie on its head. In the biggest game of the season, surely they could find the gear that had eluded them in recent weeks. Surely Mourinho could find a bit of that old magic. 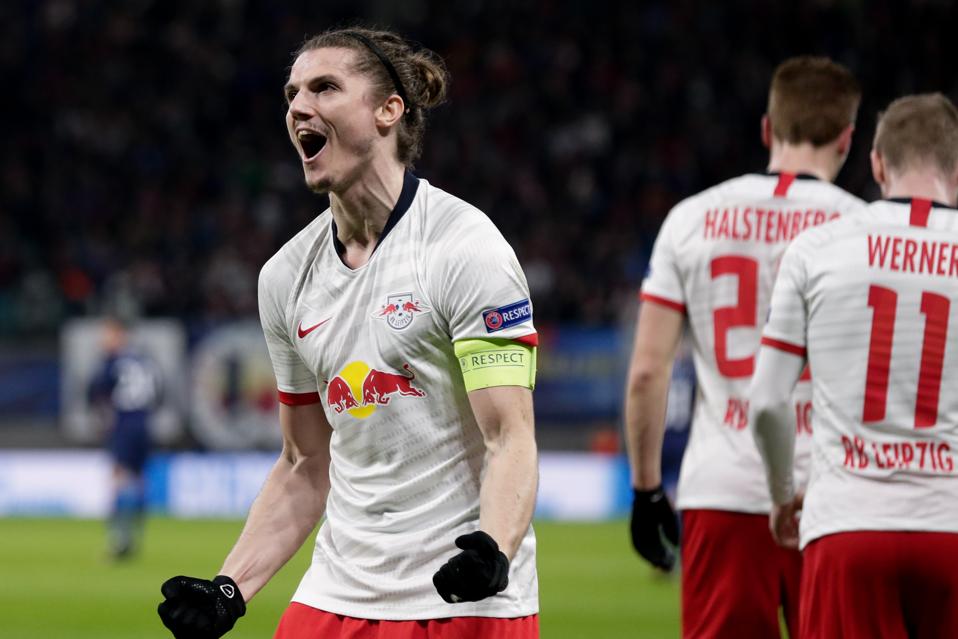 Within 10 minutes of kick-off that notion had been hurled through the window. After Timo Werner’s shot was blocked by Eric Dier, it bounced back to the Germany international who, under no pressure at all, laid it off to Marcel Sabitzer. His low, hard shot flew into the corner of Hugo Lloris’ goal.

Mourinho’s other teams, even at their most tedious, have always been solid and aggressive when they get behind the ball. As such, his Tottenham side’s passivity is particularly striking. So disinterested do they look in closing, pressing, harrying and upsetting the rhythm of the opponent, that you must wonder whether the players are 100% committed to the style that he is trying to drill them in.

Here, as it was on Saturday in Burnley, Spurs’ flat line of five with a flat bank of four in front of it was far too easy to play through. Nobody closed the gaps between the sectors and they did not move forwards as a unit to break up passing sequences before they got going. In the build up to the second goal, the ball was played through the space between the defense and midfield and out to the left, from where Angeliño crossed for Sabitzer to tuck home his second.

In attack, Mourinho’s team was equally flaccid. Not having Harry Kane and Heung-min Son is of course a huge disadvantage, but the players that were sent out did not appear to have any set plan to break down the opposition block. Mourinho might argue that he has not had long to work with the team, but unlike Spurs’ current defensive issues this problem was present in his time with Manchester United and went unsolved right to the end.

Both their play with and without the ball placed Tottenham in stark contrast to Leipzig. Nagelsmann made Mourinho’s tactical ideas look outdated, a relic of a time when football was less frantic, less focused on winning the ball back high up the pitch. 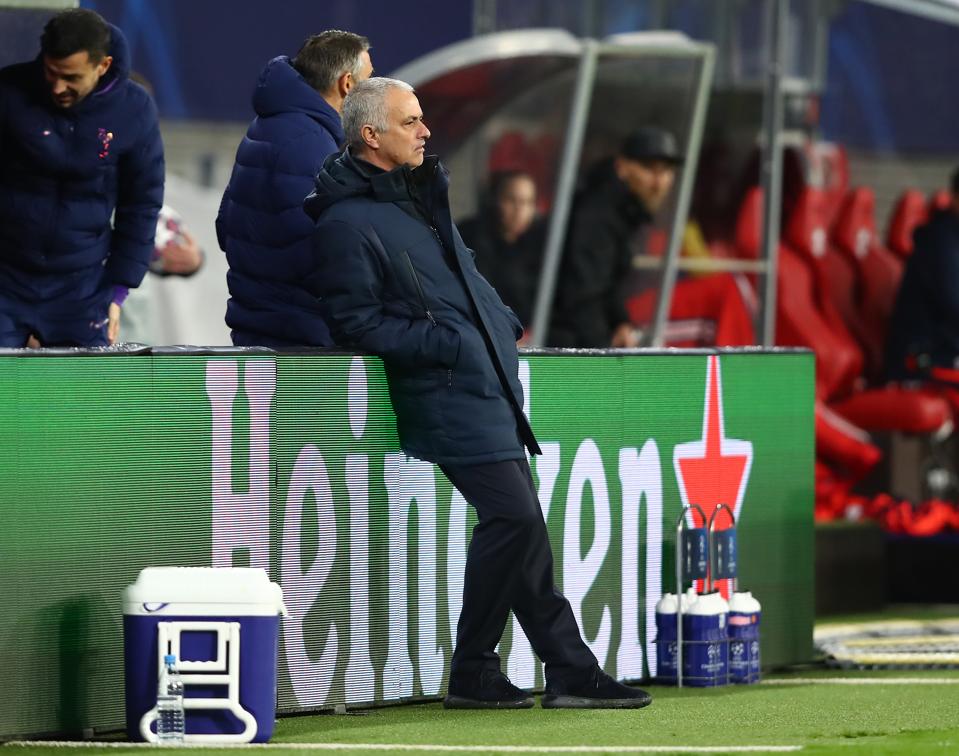 On an emotional level, too, Mourinho’s methods could be seen as lagging behind the German’s. While Hoffenheim boss, Nagelsmann told Süddeutsche Zeitung that, “Thirty per cent of coaching is tactics, 70% social competence.” In dealing with the new generation of players, those born around the turn of the millennium, Mourinho’s abilities in that second regard seem to be in short supply.

His treatment of Tanguy Ndombele was case in point. Mourinho substituted the Frenchman after 45 minutes of the game at Burnley and afterwards said in his press conference that, “In the first half we didn’t have a midfield. Of course I’m not speaking of Skipp because he’s a kid of 19 who’s played two hours in the last few days. I don’t criticise him at all.” The deduction was not a difficult one.

Mourinho may have been right about the 22-year-old’s midfielder’s performance, but his approach to resolving Ndombele’s struggles – a method he has long used an refers to as “confrontational leadership” – does not appear to wash with the new generation. At Manchester United he struggled to deal with the likes of Luke Shaw and Paul Pogba on a personal level and that generational clash appears to have carried over into this new managerial spell.

Out of the FA Cup and out of Europe, Tottenham’s season now effectively rests on Sunday’s clash with Manchester United, who themselves have looked revitalized in recent weeks. Lose it and they will be seven points behind the Red Devils in the race for fifth place. Mourinho will need to come up with some responses quickly, for the longer his reign goes on, the more questions there are to answer.

Google Tells More Than 100,000 Employees To Work From Home Due To Coronavirus