Breaking
The Ultimate Guide to Saving Money
Lights, Camera, Action—Is There A Post-Covid Future For...
7 Ways to Reduce Human Errors in Your...
How ‘Couples Therapy’ Used Technology To Cope With...
Can You Settle Your Student Loans Or Negotiate...
How to Use Amazon Attribution For Ad Campaigns
What are the Makings of a High-Quality Link?
How To Quickly Start And Scale Your Business
Terra Virtua: What NFTs Can Teach Us About...
5 Easy Steps To Prepare Content For E-A-T...
Physical Inactivity Linked To More Severe Covid-19 Infection...
The 2021 Estimated Tax Dilemma: What Tax-Return Pros...
Want To Digitally Transform Your Business? Start With...
How to Optimize Google My Business and Leverage...
Debunking Link Building Myths in 2021
How, When And Where You Can Gaze At...
Home Technology NASA’s Perseverance Rover Is The Inspiration We Need Right Now
Technology

NASA’s Perseverance Rover Is The Inspiration We Need Right Now 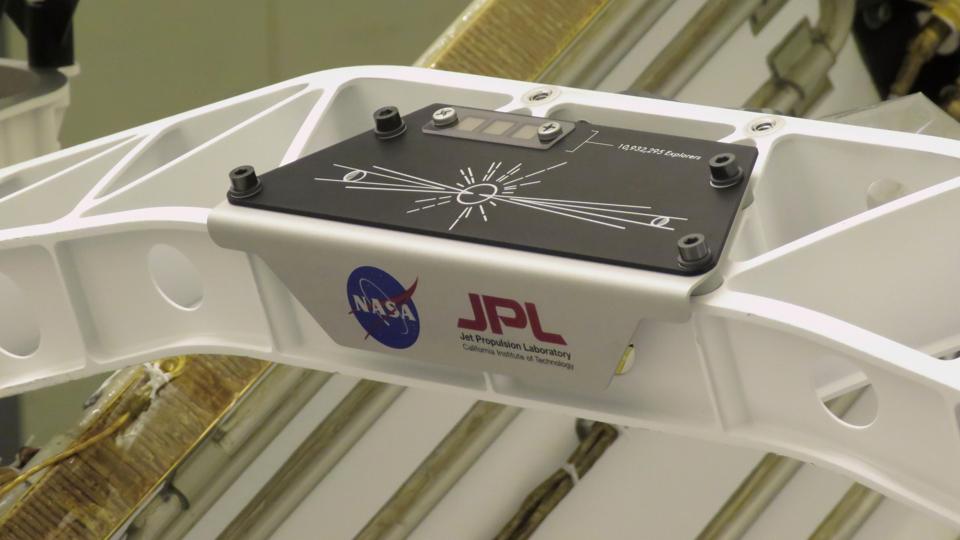 The plaque offers a stylistic nod to the Voyager record covers and the Pioneer plates.

NASA’s Perseverance rover is on track to launch this summer, and when it does, it will carry the names of nearly 11 million people to Mars.

Earlier this month, as communities around the country locked themselves down in an effort to slow the spread of the novel coronavirus, a team at Kennedy Space Center in Florida started the process of packing the rover for launch. They lowered and locked the rover’s mast, stowed away its robotic arm, and retracted its wheels. But first, they fixed the rover up with the ultimate vanity license plate.

Last year, NASA asked people around the world to submit their names to its “Send Your Name to Mars” program, and 10,932,295 people responded. Engineers used an electron beam to etch those millions of names onto three little silicon microchips, each about the size a fingernail. The chips also held 155 essays from students: the finalist entries in the “Name the Rover” contest.

That contest yielded a name more perfect than anyone could have predicted when it was announced: Perseverance. And Perseverance is exactly what humanity needs amid the challenges and uncertainty of a global pandemic and the isolation of social distancing. When the rover blasts off for Mars aboard its Atlas V rocket this summer, it will carry nearly 11 million names, a suite of scientific instruments, and tangible proof of what humans can accomplish together. It will also carry a reminder of how to face the challenges ahead of us: Perseverance.

Message In A Bottle

Perseverance isn’t the first spacecraft to carry a [noun] into space. The Pioneer 10 and Pioneer 11 spacecraft, launched in the early 1970s, each carried a gold-anodized aluminum plate mounted to their antenna support struts. The images etched onto those plates carried the information about Earth and humanity that Carl Sagan and Frank Drake most urgently wanted to share with any alien life the Pioneers might meet on their journey beyond the solar system.

The Pioneer plates contained nude pictures of a human man and woman, standing in front of a scale outline of the spacecraft; a map of the Sun’s position in relation to 14 pulsars and the center of the galaxy; a diagram of the solar system and the spacecraft’s trajectory; and the key to the whole thing, a diagram depicting a change in the energy state of neutral hydrogen items. 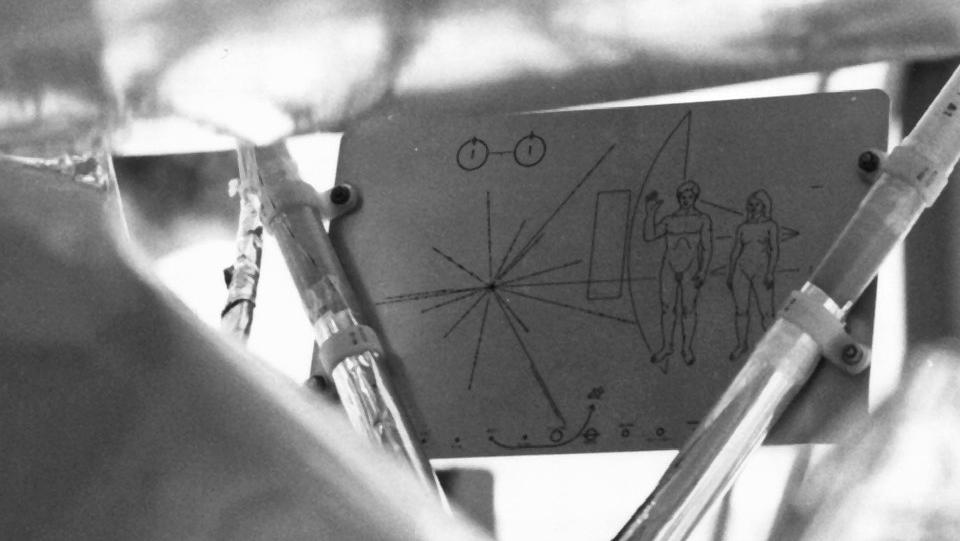 The nude figures became rather controversial even before the design was etched; the committee … [+] decided that although male genitalia were scientifically relevant, female anatomy was simply too scandalous to include.

All the units of measurement on the plate (the height of the people, the periods of the pulsars, and the rest) were based on the wavelength of light emitted at the same frequency as that energy change in hydrogen atoms. The idea was that any species intelligent enough to pick up a passing spaceship should also know the physical properties of hydrogen, the most common element in the universe. So we have to hope any aliens along the Pioneer spacecrafts’ courses are decent chemists.

A few years later, when Voyager 1 and Voyager 2 launched in 1977, they each carried a golden phonograph record full of sounds, images, and data about Earth and humans. 115 images encoded on the record offered a visual tour of our solar system, our planet’s landscapes, Earthling flora and fauna, and human beings. The sounds included music from a variety of times and cultures, nature sounds, animal sounds, and greetings in dozens of languages (and you can listen to the whole thing on SoundCloud). Ann Druyan, Sagan’s wife, also contributed an hour of recorded human brain waves. 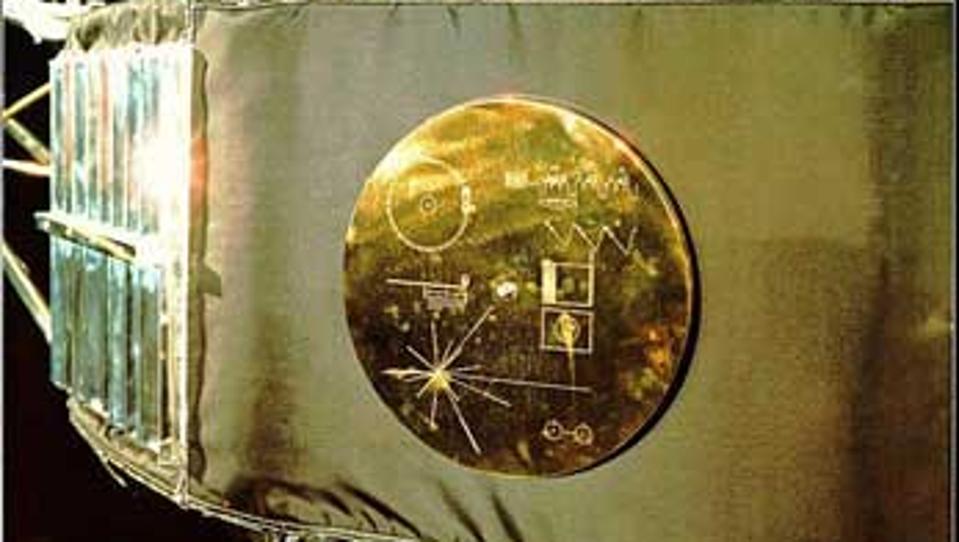 The record cover included instructions on how to listen to a record.

The metal cover of the record, affixed to the Voyagers’ hulls, included the hydrogen molecule and pulsar map from the Pioneer plates, but also a helpful diagram showing how to operate the record with the attached stylus. The nude human figures from the Pioneer plates had been replaced by silhouettes for Voyager, however, because Sagan and his committee drew criticism for the fact that both figures turned out looking like Europeans, when the original intent had been to depict a diverse blend of human traits. (There was also some controversy about the nudity itself.)

On the Voyager records, then-President Jimmy Carter left a message that resonates 43 years later: “This is a present from a small, distant world, a token of our sounds, our science, our images, our music, our thoughts and our feelings. We are attempting to survive our time so we may live into yours.”

Kilroy Was Here, With Billions Of Others

Since the 1990s, lots of spacecraft have carried lists of ordinary people’s names to their destinations. NASA invites people to send in their names for inclusion as a way to build public interest in space missions and give people a sense of being included. But for many people, sending their names to space on a digital record that no one will ever see again is a way of shouting to the universe that we were here. In the months leading up to Perseverance’s launch, that impulse feels even more pressing. 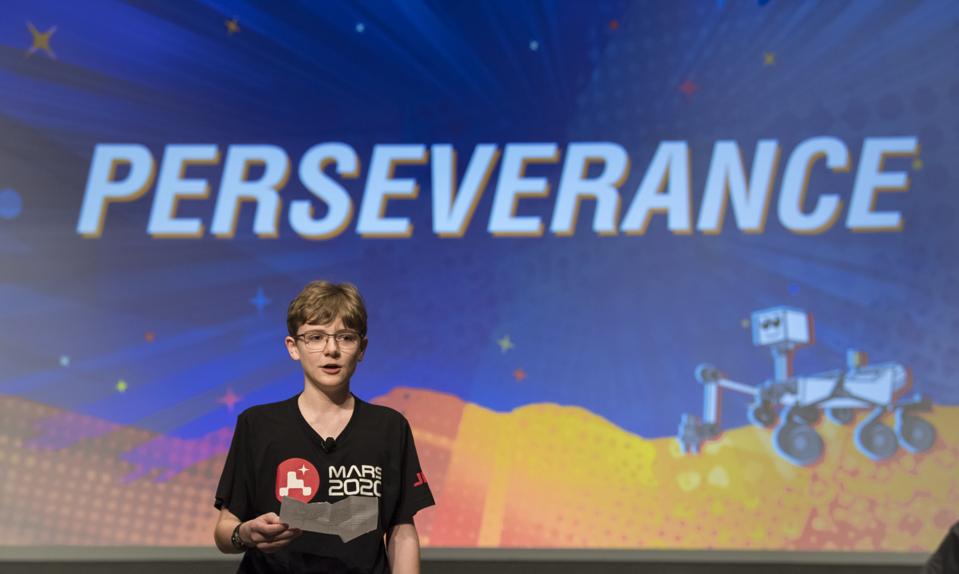 BURKE, VA – MARCH 05: In this handout provided by the National Aeronautics and Space Administration … [+] (NASA), Alex Mather, the student whose submission, Perseverance, was chosen as the official name of the Mars 2020 rover, reads his essay entry, March 5, 2020, at Lake Braddock Secondary School in Burke, Virginia. The final selection of the new name was made by Associate Administrator of NASA’s Science Mission Directorate, Thomas Zurbuchen, following a nationwide naming contest conducted in 2019 that drew more than 28,000 essays by K-12 students from every U.S. state and territory. Perseverance is currently at NASA’s Kennedy Space Center in Florida being prepared for launch this summer. (Photo by Aubrey Gemignani/NASA via Getty Images)

NASA’s Dawn spacecraft carries names submitted by the public on a microchip, and so does the Lunar Reconnaissance Orbiter. On the surface of Mars, Spirit and Opportunity are each carrying DVDs full of the names of people who wanted to send their names to Mars. And somewhere out in the Kuiper Belt, New Horizons has a CD full of names on board. Deep Impact obliterated its record of 625,000 names when it smashed into a comet in the culmination of its mission. Cassini carried the digitized signatures of Planetary Society members to Saturn when it launched in 1997, and plunged into the gas giant’s atmosphere with them in 2017.

And on March 16, 2020, the Perseverance rover’s human handlers attached the three microchips, bearing millions of names and the thoughts of dozens of students, to an anodized aluminum plate, laser-etched with an image of Earth, Mars, and the Sun. Then they mounted the whole plate on Perseverance’s aft crossbeam, where it will show up clearly if the rover takes a selfie with its mast camera – and we can undoubtedly expect to see several of those once Perseverance gets to Mars in February 2021.

Meanwhile, as Carl Sagan said about the Voyager records, “The launching of this ‘bottle’ into the cosmic ‘ocean’ says something very hopeful about life on this planet.”

Ask Ethan: How Can A Nuclear Bomb Be Hotter Than The Center Of Our Sun?