Breaking
Stock Market Crash: The End Game And Down...
Does Artificial Intelligence Design New Drugs Or Discover...
NBA 2K21: How To Download A Realistic 2021...
Ask Larry: When I File For Social Security...
Level UP With LinkedIn Live
AstraZeneca May Conduct Additional Trial For Covid-19 Vaccine...
Robert Smith Breakup Exclusive: Billionaire Brian Sheth Reveals...
‘Destiny 2’ Wants Season Of The Hunt Feedback,...
British Auto Makers’ Nervousness Over EU Trade Deal...
Want To Disrupt An Industry? Solve A Problem...
Life In 2020 AD: The Challenges Of The...
How Companies Are Adapting To Changing Customer Demand
Cyber Police Claim Double Win: Arrests In 50,000-Victim...
‘Tis The Season To Be Jolly Unless You...
The Physics Of Why You Must Never Deep...
Five Ways Holiday Shopping Will Be Different This...
Home Finance National Governments Around The Globe Look To Embrace Blockchain
Finance 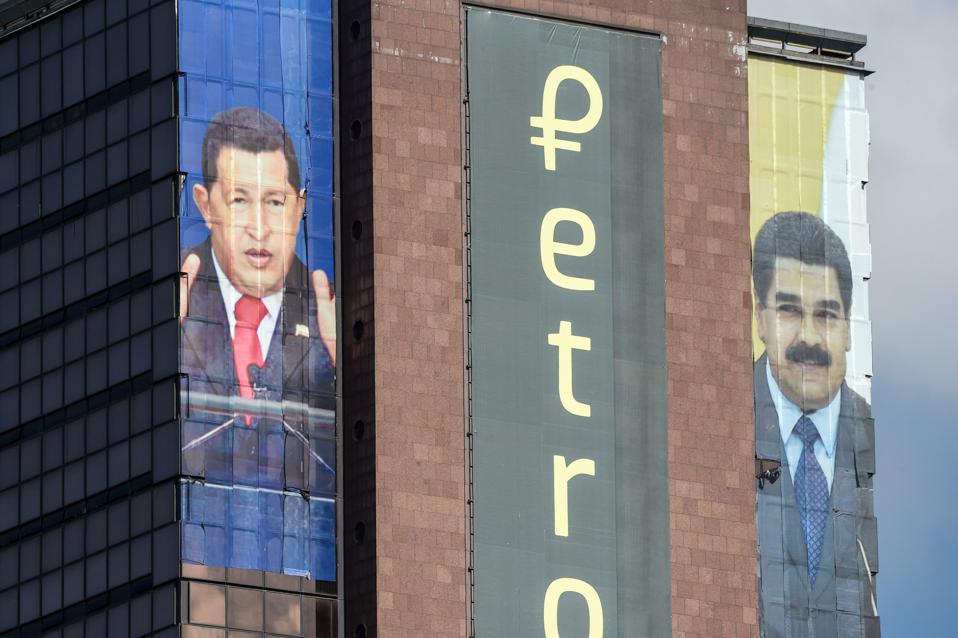 The logo of the “Petro” is displayed next to images of Venezuelan late President Hugo Chavez (L) and … [+] Venezuelan President Nicolas Maduro in a building in downtown Caracas, on September 21, 2018. – Six months after Venezuelan cryptocurrency petro, with which the government of Maduro seeks to evade financial sanctions from the US, started selling to the public, it still can not be exchangeable for money, goods or other cryptocurrencies as the bitcoin. (Photo by Federico PARRA / AFP) (Photo credit should read FEDERICO PARRA/AFP via Getty Images)

In spite of the original philosophy behind bitcoin, a tool to protect and empower sovereign citizens worldwide against oppressive regimes and predatory financial institutions, more and more nations are finding legitimate value in endorsing cryptocurrency.

Established nations like the United States and China are taking a nuanced approach in applying the tech to various departments, and smaller alternatives like Malta and the Virgin Islands have looked to crypto as a means to bolster and expand their local economies. Here’s what’s happening in the world right now.

With a regulatory stance on crypto typically seen as archaic and lethargic, the USA doesn’t typically come to mind as a champion of blockchain. However, there are many government departments actively exploring and deploying applications that leverage the blockchain for various uses.

For example, the United States now employs a private blockchain through which yearly grants are awarded to different departments, through a project called GrantSolutions. This initiative creates a centralized record of grants, whilst also improves the ease with which recurring grants can be renewed and distributed each year.

Per the previous report, the US Government is additionally building out an encrypted healthcare data exchange through the INFORMED incubator program, allowing citizens to leverage their personal healthcare data and sell their data to researchers.

The Joint Chiefs of Staff has also embarked on a pilot that utilizes the blockchain to communicate 3D printing files to military bases. As it can be quite difficult to replace older equipment, the military is increasingly relying on 3D printed parts to repair weapons and vehicles. The blockchain enables the communication of these files in an encrypted manner that cannot be intercepted by unwanted eyes.

Global headlines have emphasized a recent shift in China’s stance towards blockchain technology. Recently, a series of statements by Chinese President Xi Jinping has indicated that the People’s Republic of China plans to dive head-first into blockchain integration in a number of areas.

China’s aggressive use of surveillance on its population and controversial developments such as the social credit system, which assigns a reputation to each citizen for their “behavior,” suggests that their blockchain endorsement may be a means to further surveil and restrict their almost 1.4 billion citizens.

Integral properties of cryptocurrency include transparency and immutability. A state-backed cryptocurrency means that government officials could have complete and unrestricted access to the entirety of every citizen’s financial history and dealings. This could potentially be further expanded to blacklist and reverse unwanted activity in the eyes of the government.

Of course, future adoption by China is largely regarded as speculation, until more comprehensive developments have come to light. However, this would not be the first time a regime looked to blockchain to improve monetary control: North Korea and Russia have both been involved in similar projects.

In 2018, Venezuela launched its oil-backed petro cryptocurrency as a token on the NEM blockchain. The purpose of the central currency is to improve liquidity to the country’s oil reserves and implement a more stable alternative to a national VEF crippled by hyperinflation.

Additionally, the petro was seen as a mechanism for Venezuela to circumvent sanctions and alleviate difficulty to conduct foreign trade. However, it is unclear whether its oil-backed coin has seen significant acceptance by international business partners.

Despite interest from bad actors, the overwhelming use of blockchain by national governments has been to stimulate their economies and improve their infrastructure. A majority of the first national cryptocurrency adopters were small nations looking to gain an edge and accelerate national growth.

Malta, in particular, has seen huge growth through its blockchain-friendly legislation. With the explosion of the space in 2017, a number of recently formed and massively growing cryptocurrency startups moved operations to Malta.

The most notable of these is seen through the relocation of Binance HQ, a leading exchange valued at over US$2 billion. With a national GDP of less than US$13 billion in 2017, this single instance represents a significant boost to the island’s economy and a major proponent for further prosperity.

A recent adopter of cryptocurrency as a cash-alternative is found in the British Virgin Islands. BVI has recently emphasized an intention to focus its efforts on the emerging Financial Technology sector, and as an aspiring FinTech leader, the archipelago is looking to digitize its economy with the help of a central digital currency.

On December 3, BVI hosted its Digital Economy symposium to educate and strategize with 100 stakeholders across the islands’ private and public sectors alike. The symposium included a presentation by Lifelabs on the ongoing BVI life project. The project is developing a central cryptocurrency that is backed 1:1 by USD to address hurdles between cross-island business and consumption.

The initiative also encompasses a Rapid Cash Response (RCR) system that will quickly provide ample funds in response to any potential future disasters. 2017’s Hurricane Irma spawned over US$3 billion in damages and untold trauma for citizens, and the lack of liquid funds inhibited sufficient clean-up for months afterward.

What does this really mean?

Well, as modern society transitions to a global, digital economy, blockchain represents a key tool for third-world and developing economies to transition to digital in pace with established and first-world counterparts. This benefit is particularly impactful to areas currently dominated by fiat that are hindered by an inadequate or nonexistent banking infrastructure.