National Parks Are Great, But Let’s Not Neglect State Parks 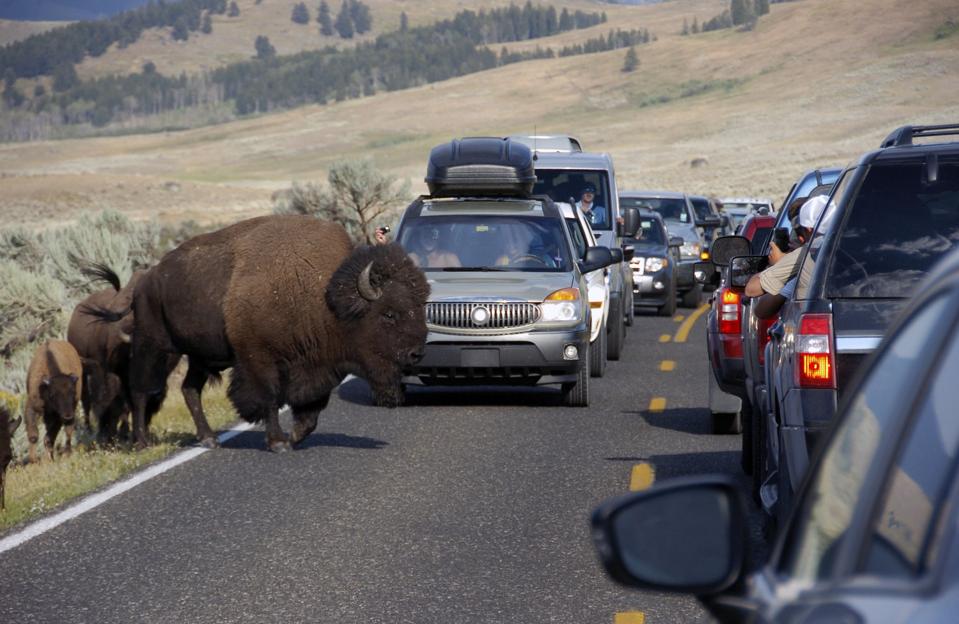 FILE – In this Aug. 3, 2016, file photo, a large bison blocks traffic as tourists take photos of the … [+] animals in the Lamar Valley of Yellowstone National Park in Wyo. (AP Photo/Matthew Brown, File)

We have a quiz question. Name one issue on which Republicans and Democrats can agree, where the U.S. Chamber of Commerce has joined hands with environmental organizations, and that is supported by six former interior secretaries from both parties.

Early this week, the U.S. Senate voted 80-17 to start deliberating on the Great American Outdoors Act (S. 3422). This bill, with 44 Democratic and 15 Republican sponsors, has two major objectives. First, to create a permanent $900 million annual funding stream (from offshore oil and gas revenues) for the Land and Water Conservation Fund, which supports local, state, and federal lands. Second, to fund the $20 billion maintenance backlog at national parks, other federal lands, and the Bureau of Indian Education.

Why this political support for the outdoors? It’s about jobs and the economy. The outdoor recreation industry supports more than 5 million jobs and contributes to $778 billion in consumer spending.

National parks in particular are the crown jewels of the outdoor industry. One might think that any beautiful mountain, lake, or canyon would attract visitors. It does, but labeling it as a national park adds a seal of recognition to its beauty. One study reports that getting the national park label increases the number of visitors by 21% within five years. Maybe Google searches channel potential visitors to national parks. Or maybe social media “likes” increase when the selfies are in taken in a national park. Whatever be the mechanism, politicians across party lines work hard to secure the national park designation for federal properties in their states.

With bipartisan Congressional support, Indiana Dunes National Lakeshore Monument was recently designated as Indiana Dunes National Park. Its visitor center recorded a record high of 131,662 visitors in the first eight months of 2019. Cathy Martin, program manager of Save the Dunes, notes, “I think that name change has sparked a desire to learn more.” Similarly, Park Superintendent Paul Labovitz said that “This crush of visitors is clearly an indication that the public responds to that national park name.”

National parks are often located far away from major population centers. When race and class overlap, as they often do, cost considerations make national parks out of reach for many. This is why, in addition to supporting national parks, business and environmental groups should advocate expanding state, county, and regional parks.

During his visit to Glacier National Park in 1934, FDR noted: “There is nothing so American as our national parks…. The fundamental idea behind the parks…is that the country belongs to the people, that it is in process of making for the enrichment of the lives of all of us.” Without doubt, national parks should be celebrated and protected for future generations. But we should recognize that not everybody has the resources to enjoy them. State parks, in contrast, provide more equitable opportunities for outdoor recreation. This is the path to greater environmental equity and inclusion.

No, Scientists Will Never Be Able To Remove...

Is COVID-19 Coronavirus A Bioweapon From A Lab?...