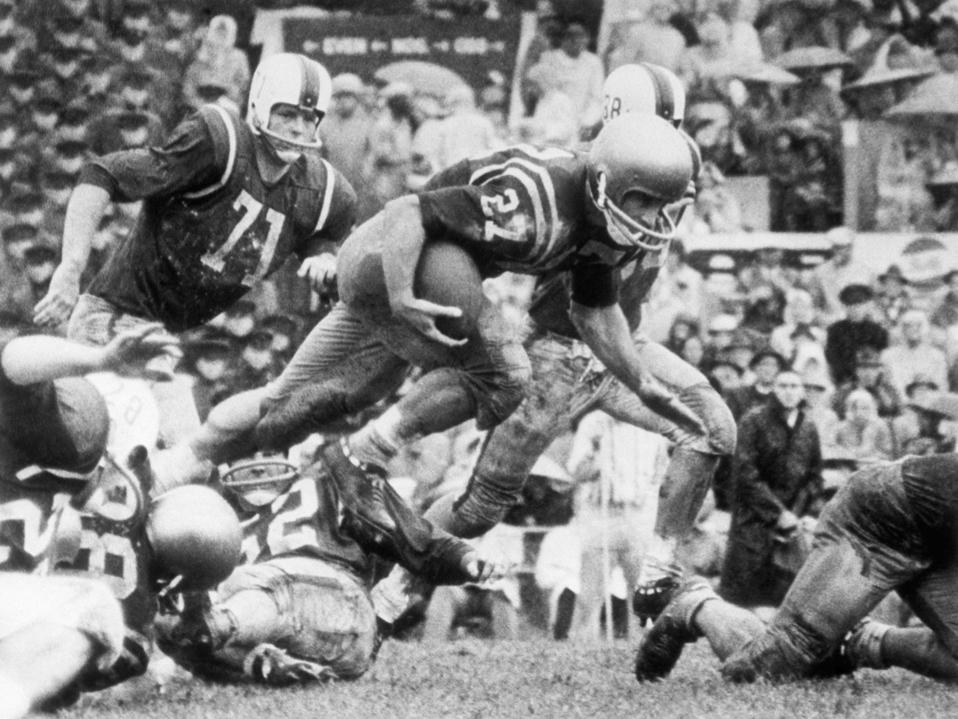 The annual Army-Navy game is always a special event on the college football calendar, as the two venerable service academies have traditionally played the official regular season curtain-closer for quite some time now. In recent years, this has also become special from a uniform perspective since both teams have turned this into an opportunity to put special uniforms on display for the big game.

However, where this uniform shines is the helmet design. While it would be one thing to just go with a throwback helmet and leave it at that, Navy and Under Armour decided to go one step further. Each helmet is hand-painted in order to pay tribute to the Heisman Trophy. This goes back to the 1960s-inspired look, as Navy’s two Heisman Trophy winners (Joe Bellino and Roger Staubach) both won the trophy during the 1960s.

In fact, both Bellino and Staubauch are represented with their numbers painted on the front of the helmet. Combine that with the classic Navy anchor logo also being painted on and this helmet is what makes these uniforms stand out from most other throwback-inspired uniforms. It also makes for a perfect way to cap off college football’s season-long celebration of 150 years. Plenty of teams have done their part to pay tribute to the old days of college football but Navy was one of the few to really spend a game truly embracing one of their old looks.

After this stellar unveiling for the Navy Midshipmen, you have to wonder if Army will also have a throwback-inspired uniform ready to go for the big rivalry game. It would actually be nice to see two powerhouses from the old guard of college football come together to embrace their past when it comes to the gridiron. Like Navy, Army normally uses this game to experiment with new looks. Additionally, Under Armour and Nike aren’t normally on the same exact page when it comes to making matching uniforms for the Army-Navy Game. We’ll see what Army has in mind very soon but I have to admit that I’m hoping for a throwback-inspired look from the Black Knights.

Either way, the bar has been set by Navy with their uniforms for this year’s game. It’s one of those uniforms where paying attention to the details is what truly matters. It may be a simple look from a far but when you really get up close with this uniform (and especially the helmets), you start to get why this is such a good piece of football uniform design.

College Basketball: Get Ready To Have Your March Madness Bracket Busted Wide Open

Why Small Businesses Need to Leverage Their Online...

5 Ways To Love Your Investors

Australia In Flames: Pictures Of A Natural Disaster