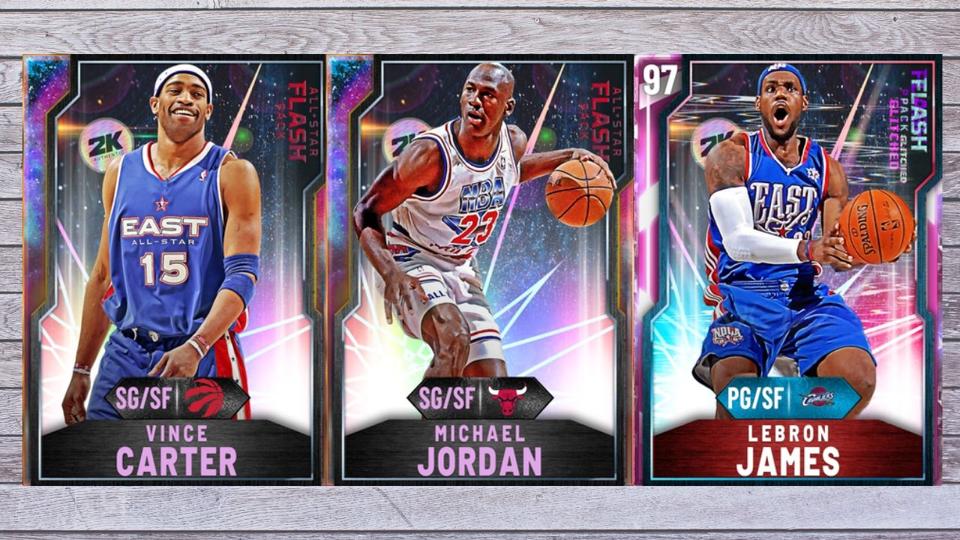 The NBA All-Star Flash Packs have changed NBA 2K20’s MyTeam mode. There are a number of valuable cards available in this series, but three stick out as the obvious top prizes. Fans of the mode are scrambling to collect the Galaxy Opal versions of Michael Jordan and Vince Carter, and the Pink Diamond LeBron James.

In addition to the Jordan, Carter and James cards, a Diamond Miles Bridges, Bam Adebayo, Derrick Jones Jr., and Pink Diamond Buddy Hield and Aaron Gordon cards from All-Star Friday and Saturday are also a part of the series.

The Pink Diamond James card can be played at the point guard and power forward position. This card is the latest in the Glitched series joining the Diamond Ben Simmons and J.R. Smith. The Simmons card has changed the meta in the game, and the PD James will likely take things to the next step for Triple Threat Online and MyTeam Unlimited.

The James card has the obvious passive strengths that come with the King’s in-game player models, but it also has an 89 three-point rating to go with 58 total badges. Thirty of them are Hall-of-Fame–including Clamps–and the other 28 are gold.

Because of James’ fame and point guard options, the card is going as high as 438,000 MT on the Auction House as of Sunday night.

The Auction House costs for the Galaxy Opal Jordan (375,000 MT) and Carter (260,000 MT) cards aren’t as high as James’, but both might still be better for your lineups. To cop all three at the Auction House, you’ll likely need to have a little more than 1 million MT on hand. Good luck.

Carter has a 94 steal and 95 perimeter defense. Also, Carter’s speed is a 96. However, Carter does have one more badge with 37 HOF and 23 Gold. Ideally, you would snag all three cards so that you could play James at point, Carter at the 2, and Jordan and small forward.

Because of James’ size, this would also be a deadly squad for Triple Threat Online.

Up until now, I’ve stuck with the GO Ray Allen as the best swingman card in the game, but the Jordan and Carter both seem to be a little better.

Top 20 Entrepreneurs Give 20 Tips To Get To 7 Figures

Why Everything Is Closing For Coronavirus: It’s Called...