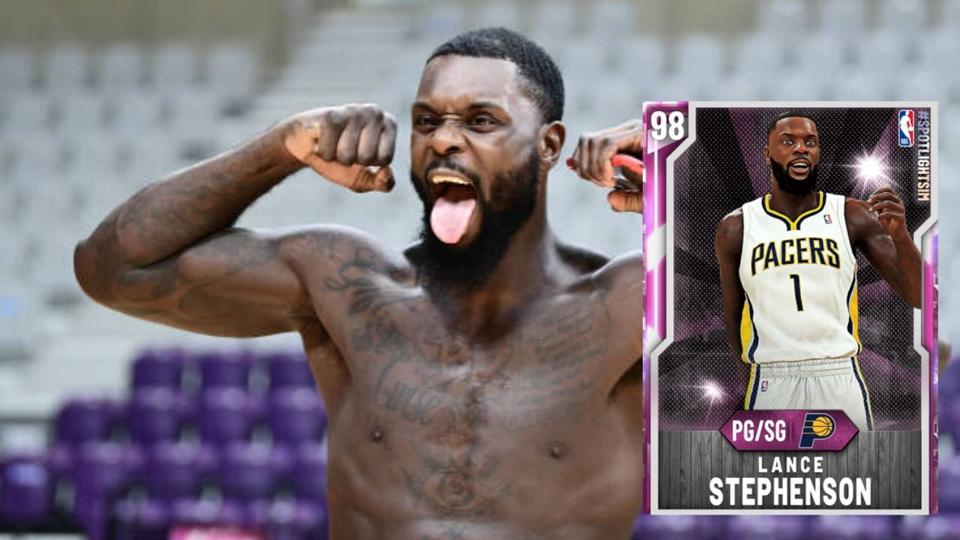 There is more content here for those who are chasing the Completionist goal, but competitive players will focus on one of the Pink Diamonds in this release.

As locker codes go, this one is pretty tame, but my motto is always take anything a collector mode gives you for free.

In the best-case scenario, you could get one of the new Spotlight Sim Series Moments cards.

As always, it’s the luck of the ball drop:

The latest content release in the NBA 2K universe consist of six new Spotlight Sim Moments cards. These cards, like the last bunch highlighted by the Pink Diamond Ja Morant, were generated by the 2K community.

With NBA basketball shut down and no new Moments cards being produced from real-life action, 2K has kept the ball rolling by allowing fans to submit their impressive screenshots of box scores highlighting outstanding individual performances.

If the boxscore is impressive enough, 2K is generating a Moments card for the player and releasing it to the community. The tweet below shows off which players are new in this release:

The Pink Diamond Lance Stephenson stands head and shoulders above every other card in this set. If you ever used the Amethyst Stephenson, then you know it was one of–if not the–biggest value cards in the mode.

It could play on the level of most Pink Diamonds because of its combination of animations, speed, three-point shooting and dunking ability.

Now imagine that same card made exponentially better, and that’s what the Pink Diamond Stephenson delivers.

Take a look at these upgrades:

The badge count has also jumped from 47 to 52, and Stephenson’s number of HOF badges has ballooned from 9 to 29.

The PD Danilo Gallinari is a nice card and the Mikal Bridges is a suitable Diamond, but the PD Lance is the one you’re going to want the most from this release.

How To Get The New Pink Diamond Lance Stephenson, And The Other Spotlight Sim Moments Cards

As always with Moments cards, there are available through pack pulls and auction house purchases. You can pull the Spotlight Sim series Moments cards through League Series II or Heat Check packs.

You can also look to find these cards in the auction house.

Currently, the Stephenson Pink Diamond was going for close to 200,000 MT. Danilo Gallinari was hovering around 100,000 MT. Look forward to more 2K content with MyTeam, and in the coming weeks, the first words on NBA 2K21.

‘Destiny 2’ Is Sitting On The Easiest Fountain...