Breaking
Increased Risk Of Chronic Conditions Associated With Early...
Top ETFs This Week As Dow Ends Day...
As Biden Admin Eyes Canceling Student Loans, Taxpayers...
How Social Media Is Helping Cryptocurrency Flourish
Here’s What You Need To Know About AstraZeneca’s...
Mini Gifts: What To Get For Your Colleagues...
Report: Biden Picks Janet Yellen For Treasury Secretary
Policy Priorities
How To Poise Your Business For Success (And...
Eight Key Steps To Landing Your Product In...
Brands That Are Redefining Black Friday
How Much Room Is There For E-Kick Scooter...
Why We Must Update The Law For The...
The Tax Rules For Home Businesses And Working...
How To Use The ‘E.R.I.C.’ Framework To Tackle...
Business Entity Types 101: Is It Time To...
Home Business NBA All-Star Weekend Has An International Flavor, And It’s No Accident
Business

NBA All-Star Weekend Has An International Flavor, And It’s No Accident 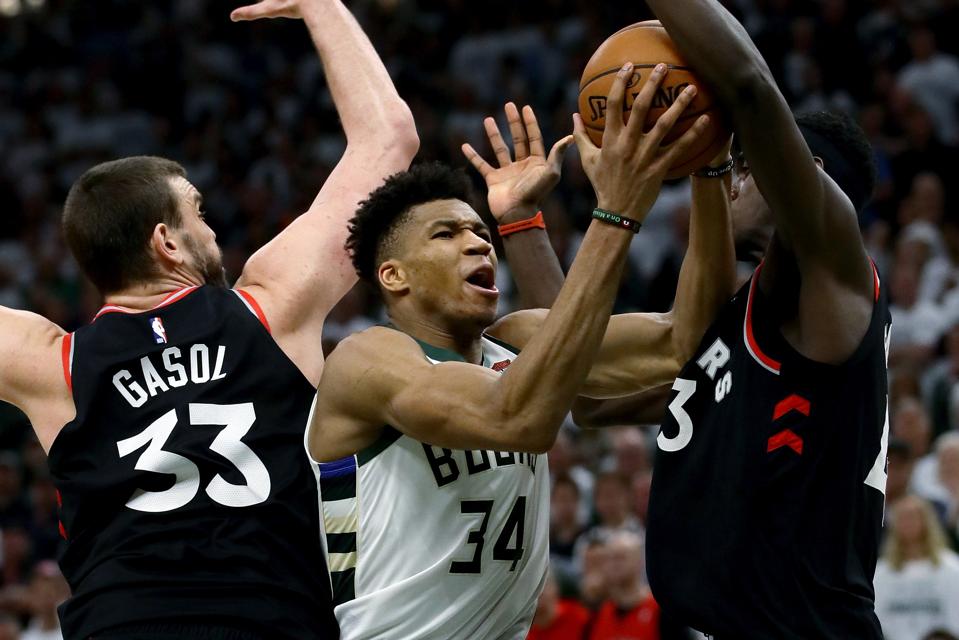 Giannis Antetokounmpo #34 of the Milwaukee Bucks attempts a shot while being guarded by Marc Gasol … [+] #33 and Pascal Siakam #43 of the Toronto Raptors during the 2019 Eastern Conference Finals. The Raptors went on to become the first non-United States team to win the NBA title. NOTE TO USER: User expressly acknowledges and agrees that, by downloading and or using this photograph, User is consenting to the terms and conditions of the Getty Images License Agreement. (Photo by Jonathan Daniel/Getty Images)

This weekend the NBA’s elite players are gathering in Chicago for the annual All-Star weekend. Among them will be a record 19 international players from 15 countries, including a record four international players voted as NBA All-Star Game starters: NBA reigning MVP Giannis Antetokounmpo from Greece, reigning Rookie of the Year Luka Dončić from Slovenia, Joel Embiid, and reigning Most Improved Player of the Year Pascal Siakam, both from Cameroon.

On top of that there are four other international All-Stars including reigning Defensive Player of the Year Rudy Gobert from France, Nikola Jokic from Serbia, who finished fourth in NBA voting last year, Domantas Sabonis, the son of the legendary Lithuanian star Arvydas Sabonis who is coming into his own this season, and Ben Simmons from Australia.

It represents somewhat of an international takeover of the NBA. Even the reigning champions, the Toronto Raptors, hail from outside the United States, and boast some of the world’s best international players including the afore-mentioned Siakam and Spain legend Marc Gasol, who also lifted the FIBA World Cup this summer.

How the NBA is growing into an international league

This is no accident. The NBA has been working hard to grow, and then capitalise on, the popularity of basketball around the world. This All-Star weekend will reach fans in 215 countries and territories in 47 languages on their televisions, computers, mobile phones and tablets. The NBA recently successfully held their first regular season game in Paris, as part of their now-annual trip to Europe.

That’s where I met Chris Ebersole, the NBA’s Director for Elite International Basketball Operations. He’s responsible for the NBA’s two major international talent programmes – Basketball Without Borders, which has been running since 2001, and the NBA’s new international academy system, which started in 2016. They’re part of what Ebersole calls “a much larger development pyramid that we look at” starting from the Junior NBA, the NBA’s grassroots programme.

These programmes aim to turn that global interest into a pipeline of international talent. For Ebersole it’s undoubtedly helped by “the kind of sustained level of international presence. I think we had 108 players on opening night rosters and this year, but that number’s been pretty consistently over 100 for the last several years, so it’s not kind of a flash where you get one or two guys and it’s not really sustained. It’s across the league, and the players aren’t coming from just one place they’re coming from everywhere.”

From Basketball Without Borders to NBA academies 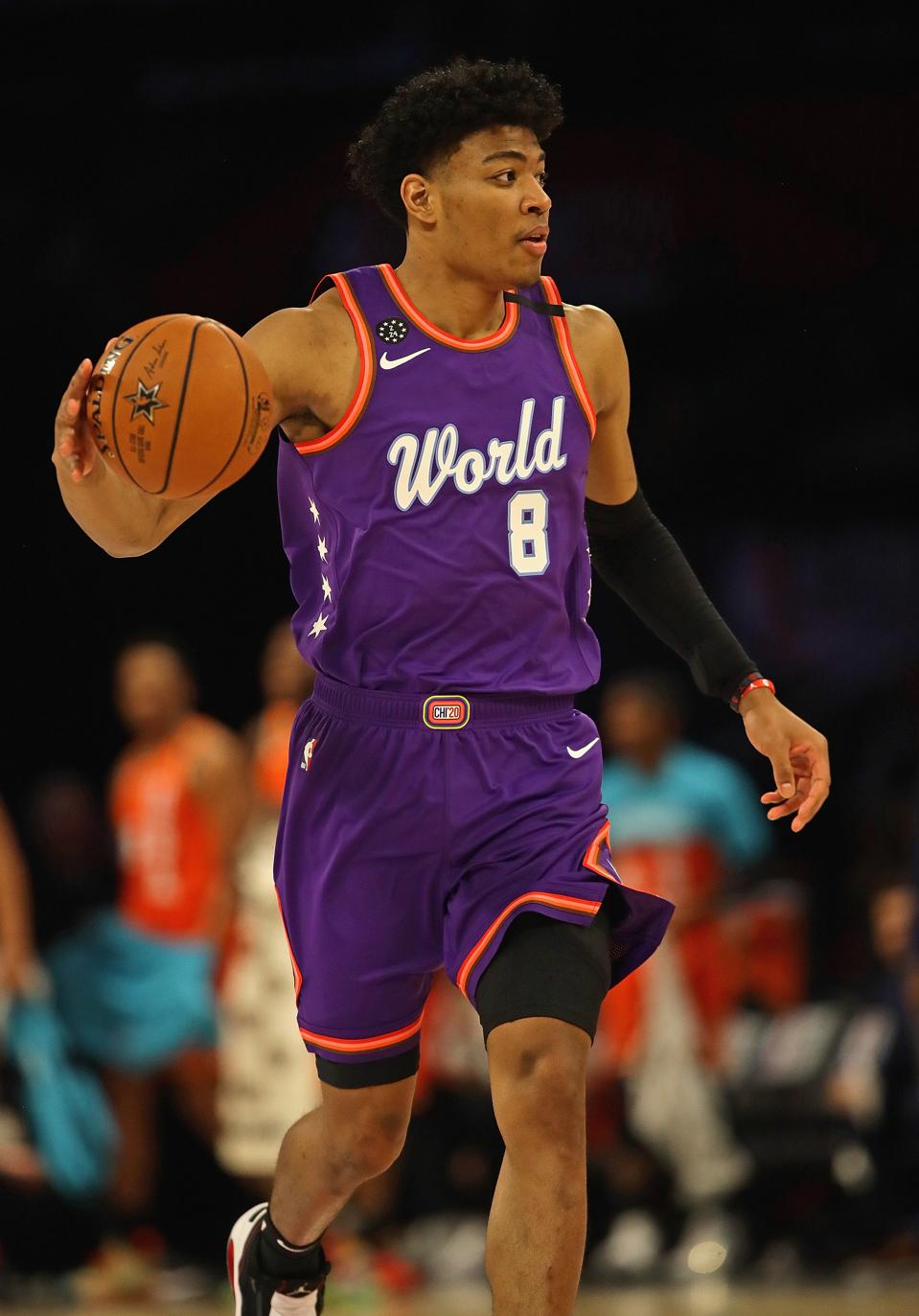 CHICAGO, ILLINOIS – FEBRUARY 14: Rui Hachimura #8 of the World brings the ball up the court against … [+] the USA at the United Center on February 14, 2020 in Chicago, Illinois. The USA defeated the World 151-131. NOTE TO USER: User expressly acknowledges and agrees that, by downloading and or using this photograph, User is consenting to the terms and conditions of the Getty Images License Agreement. (Photo by Jonathan Daniel/Getty Images)

Notable names include All-Stars Embiid and Siakam, NBA champion Gasol, and no less than four of this year’s participants in the Rising Stars game – Deandre Ayton, RJ Barrett, Rui Hachimura, the first Japanese player named to a Rising Stars roster, and Shai Gilgeous-Alexander.

Their next step in talent development has been the opening of five academies around the world. Recently their global academy team scored a big victory, winning the 2020 Torneo Junior Ciutat de L’Hospitalet in Barcelona. They defeated some of the top international clubs along the way in what Ebersole described as “a major milestone with the programme.”

According to Ebersole, “the key to talent development is playing against the best competition and that’s what this programme allows us to do.” That principle is at the heart of what Ebersole explains is a three-point process.

Firstly, the NBA identifies talent through camps, contacts and relationships with national federations. Then, once they’ve identified the highest potential young players the academies focus on “developing that talent on and off the court so really making sure we’re providing not just the best basketball coaching but strength and conditioning nutrition, mental health, academics. We have to make sure we give them really the whole package and develop them holistically.” Finally there’s the crucial competition element, which according to Ebersole not only “helps the development but also is an exposure platform.”

Fitting into the local basketball ecosystem

For the system to work, the NBA needs to remain sensitive to the local context, and ensure that they are complementary to what is already on the ground. For Ebersole one of the more interesting lessons they’ve taken is that “there isn’t really a cookie cutter approach that you can apply as these markets are all very different. The level of infrastructure, the level of coaching, the level of basketball resources and investment is so different in all these different areas … [for example] education-based systems versus club-based systems.”

That’s meant the NBA has had to be “flexible enough to fit around the existing systems and build off of those”, says Ebersole. “In some cases, things like NBA academies, where we’re investing in year round programming for elite athletes and residential programmes and the really kind of intensive programmes that we operate, is the way to go. In other cases, we don’t go that route and we stick to more camp-based approaches which are like the Basketball Without Borders camps.”

How the NBA’s new academies work

In practice how does the academy system work? Ebersole explains. “So, for example, our NBA Academy in India, our NBA academies in China, those are strictly focused on those particular countries. We have academies in Senegal and Mexico City which bring in players from those entire continents respectively. And then we have our Global Academy in Australia, which brings in players from all over the world regardless of what region and so we’ve got our chance I think to bring in players from wherever they’re from.”

As for the competition that varies, with Ebersole highlighting the combination of academy players who helped them to their recent success. “In some cases they travel and play with their team, so the team that played in Barcelona was our Global Academy team, plus three athletes from our Latin American Academy who came along.”

For the athletes themselves, Ebersole says they try to tailor the programme to the path that suits them best. That doesn’t necessarily mean the NBA. “We’ve had 20 who have gone on, from our boys programme, into the Division I ranks in the NCAA, but we’ve also we have one player from China, for example, who came to our global academy and is now playing in the WNBA. Ultimately our goal with the programme is when they reach their graduation point at 18 years old or 19 years old, that they have every door open to them and then they can pick what’s best for their particular package.”

Making the NBA a tangible prospect

For many international basketball fans growing up watching the NBA in years gone past, it’s been a distant prospect, something you can see through the TV or computer screen, but never really touch. The NBA’s expansion has changed all that. And that helps create a belief in younger players that they can one day make it themselves. 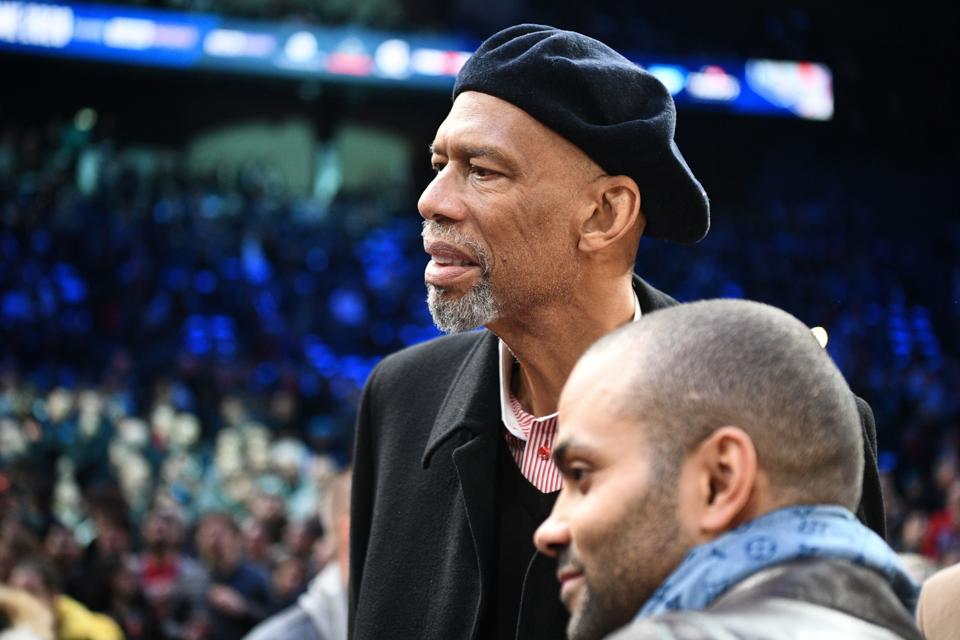 Ebersole explained that the game in Paris was a major opportunity for their academy. “It’s really crucial in that whole development piece to give them tangible things that they can see and aspire to. And so I think for them to have the opportunity to come to an NBA game, see an NBA practice — they were able to watch the Bucks practice [in Paris] — for them to be up close and see that and understand that it’s not something that is far away through some screen it’s really something that they can access, and interact with some of the coaches from the teams, and with our NBA legends who are in market.”

This weekend the NBA and FIBA are conducting the sixth annual Basketball Without Borders Global Camp as part of NBA All-Star 2020.  Current and former NBA, WNBA and FIBA players, including Siakam, Latvia’s Davis Bertāns, who is participating in the three-point contest, and 2017-18 NBA All-Rookie First Team member and former Basketball Without Borders participant Lauri Markkanen, will coach the top 64 high school age campers from 34 countries and regions across Africa, the Americas, Asia and Europe.

It’s another opportunity to provide that vital glimpse of the future to the athletes taking part, as Ebersole emphasizes. “Now they’re watching people who used to be Basketball Without Borders kids like them play in the Rising Stars game and so, you know, they’re sitting there like next year I could be out on the court playing this game.”

As the NBA continues to expand their operations and reach globally, Ebersole is understandably upbeat about sustaining the growth of the NBA’s international talent. “I think we’re at an exciting point right now with just the overall number of players, and not just the quantity, but the quality… it’s never been more global than it is now. I expect that trend to continue and I think it’s something that’s here to stay.”