Breaking
What You And Your RTO Business Need To...
4 SEO Trends for Websites You Should Not...
3 Reasons Why Desk Booking Is Rising In...
8 Tips to Play & Win at Online...
How can software benefit facility management?
Do Professional Casino Players Pay Taxes for the...
Becoming a Trading Expert: What Is the Best...
Dos and Don’ts for B2B Organisations in 2022
Should your business be using Machine Vision?
Colour Masterbatch vs Raw Pigments – Which Is...
Keeping your business moving as you expand online
Top Four Celebrities Who’ve Invested In Cryptocurrency
Why is Cloud Computing Tipped to be the...
How to Raise Money for Non-profit Organizations in...
Choosing the right theme for your WordPress Business...
A Guide to Using Celebrities to Promote Your...
Home Business Nearly Halfway Through The Season, Chris Paul And The Oklahoma City Thunder Are Experiencing Good Times
Business

Nearly Halfway Through The Season, Chris Paul And The Oklahoma City Thunder Are Experiencing Good Times 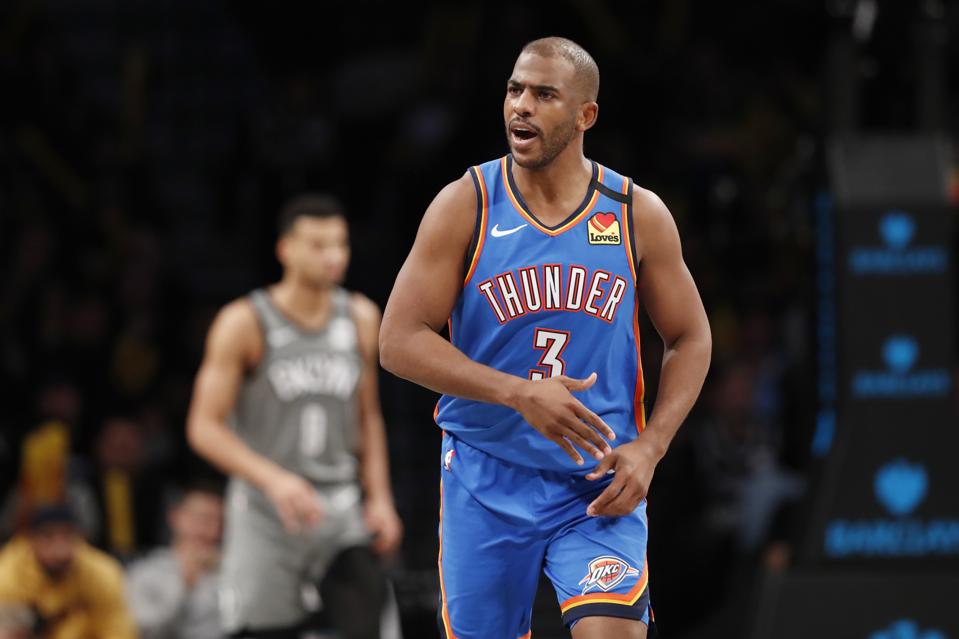 Oklahoma City Thunder guard Chris Paul (3) reacts after hitting a three-point shot during the second … [+] half of an NBA basketball game against the Brooklyn Nets, Tuesday, Jan. 7, 2020, in New York. The Thunder defeated the Nets 111-103 in overtime. (AP Photo/Kathy Willens)

It is nearly an hour after another classic Chris Paul game highlighted by dynamic clutch shots and the mood is light inside the Oklahoma City Thunder locker room.

When a team is playing so well of late you can expect the mood to be jovial and have an airy vibe to it.

That’s why after beating the Nets and coming back for another win, Paul puts on his brown hat walks over to the awaiting media in the middle of the room. While answering questions about an 111-103 overtime win in Brooklyn on Tuesday, he engages in some playful banter with Shai Gilgeous-Alexander, doing this after Dennis Schroder smiles while crashing his on-floor interview with NBA-TV’s Dennis Scott

Such as conceding he’s not the greatest at finishing at the rim (though he is shooting 59 percent inside five feet) and joking how a 10-foot elbow jumper is his equal to making a layup (Paul shoots 52.4 percent on shots 10 to 14 feet). Or talking about defense and talking about Schroder being a pest for the full 94 feet, joking about Gilgeous-Alexander “finally learned how to defend the post”, or quipping how Gilgeous-Alexander has too much hair to fit into the hat Paul is wearing.

All of this is occurring as Gilgeous-Alexander is standing in the back of the group interview and listening intently to Paul, whose NBA debut occurred Nov. 1, 2005 when Gilgeous-Alexander was seven years old growing up in Toronto.

After Paul, Gilgeous-Alexander and Schroder combined for 64 points in Oklahoma City’s 15th win in 20 games, the Thunder are 21-16, a place not many projected they would be when preseason prognostications were handed out. This was after Paul was acquired from Houston for Russell Westbrook — six days after Paul George was dealt to the Los Angeles Clippers to join forces with Kawhi Leonard.

“With a player like Chris that draws so much attention and can do so many things on the court, it makes it easy for the rest of us,” Gilgeous-Alexander said. “He has the defense at his mercy at the end of every game.

The Thunder acquired a combined seven first-round picks in those deals and the remainder of Paul’s contract at three years, $124 million along with Gilgeous-Alexander and Danilo Gallinari’s expiring contract. Many preseason forecasts assumed Paul would not be kept the entire season, but in a season with few expectations the Thunder are enjoying themselves immensely even with a team in the middle of the pack in many statistical areas.

It’s a mixed bag of numbers for the Thunder but one that has helped is what unfolds when Paul, Schroder and Gilgeous-Alexander are on the floor at the same time. In helping the Thunder make the plays down the stretch, the trio was on the floor for the final 9:45. 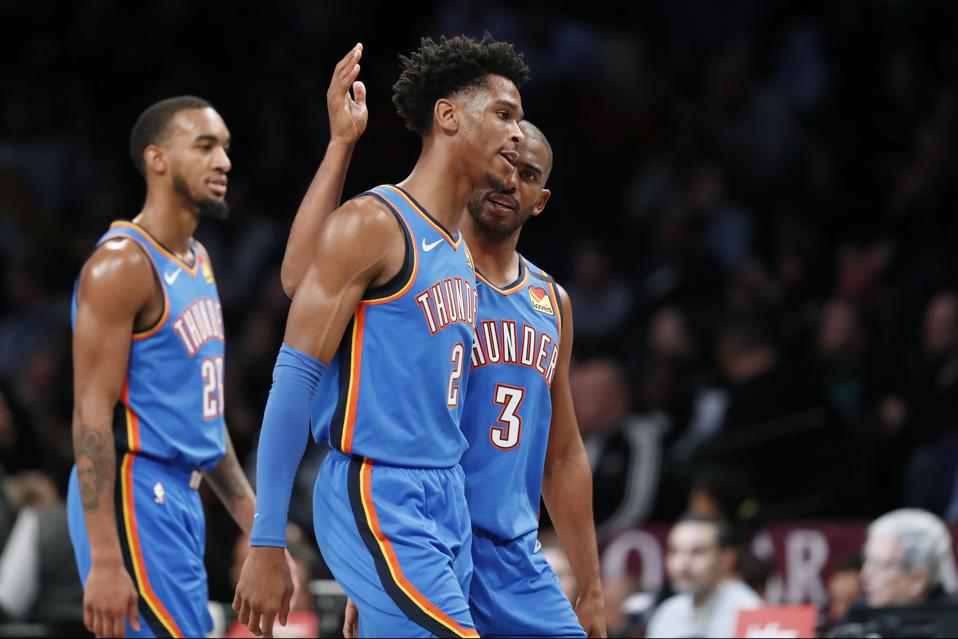 Oklahoma City Thunder guard Chris Paul (3) congratulates Oklahoma City Thunder guard Shai … [+] Gilgeous-Alexander (2) as the pair return to the bench with guard Terrance Ferguson (23) behind them during a timeout in overtime of an NBA basketball game, Tuesday, Jan. 7, 2020, in New York. Paul had 28 points and Gilgeous-Alexander had 22 points to help the Thunder defeat the Nets 111-103 in overtime. (AP Photo/Kathy Willens)

During those final moments with the trio on the floor, Oklahoma City outscored Brooklyn 22-9. In that span, the trio combined for every point with eight free throws and six mid-range jumpers between distances of 10 to 19 feet.

It is what the theory of wanting to keep your best players on the court at the same time, a fact Billy Donovan sold his newcomers on as time passed between the deals and training camp. It is a theory proven right as the trio own an offensive rating of 125 and a net rating of 27.6 in their 232 minutes together.

“It was probably something I gave consideration and strong thought to,” Donovan said about four hours before Paul closed out Oklahoma City’s latest win. “Listen, I think for all these guys they deserve to be on the court because they’re really good players and I think you want to put your better players on the floor. It just was a matter of how these three guys could co-exist out there and how they could play off each other.

“I think their unselfishness and the relationship they’ve built and established in a short period of time has been a key component of that but really it’s tribute to those guys willing to work together and understand that they’re all going to have to give some stuff up. I think they’ve all been willing to do that. As long as we can move the ball, make the extra pass and play together and play with good pace and good speed, everybody’s going to have a chance a succeed.”

Judging by the jovial mood, the Thunder are in a good place entering Westbrook’s return to Oklahoma City on Thursday, especially when their guard trio closes out games as effectively as they did in Brooklyn.