Two of the world’s largest brands entered subscription video on demand (SVOD) over the past quarter, which means the upcoming Netflix earnings report on January 21st will be under pressure. However, financial analysts are overestimating Disney and Apple, as these companies will not easily catch up to the top streaming subscription service over the long-term.

Netflix has a Firm Hold on OTT

There are more than 190 OTT providers to keep track of in the United States. This has the market in a frenzy, which is one reason we see whipsaw reactions to news of any kind in the OTT market. For instance, Netflix shed $24 billion in market value following the second-quarter earnings release in July. This could happen again, but in the long-run, it won’t matter.

Netflix is the top subscription service in the OTT market by a wide margin, claiming 87% of OTT households in the United States. In Western Europe, Netflix has a penetration of 70-87% in English-speaking countries and 55-64% in non-English speaking countries. 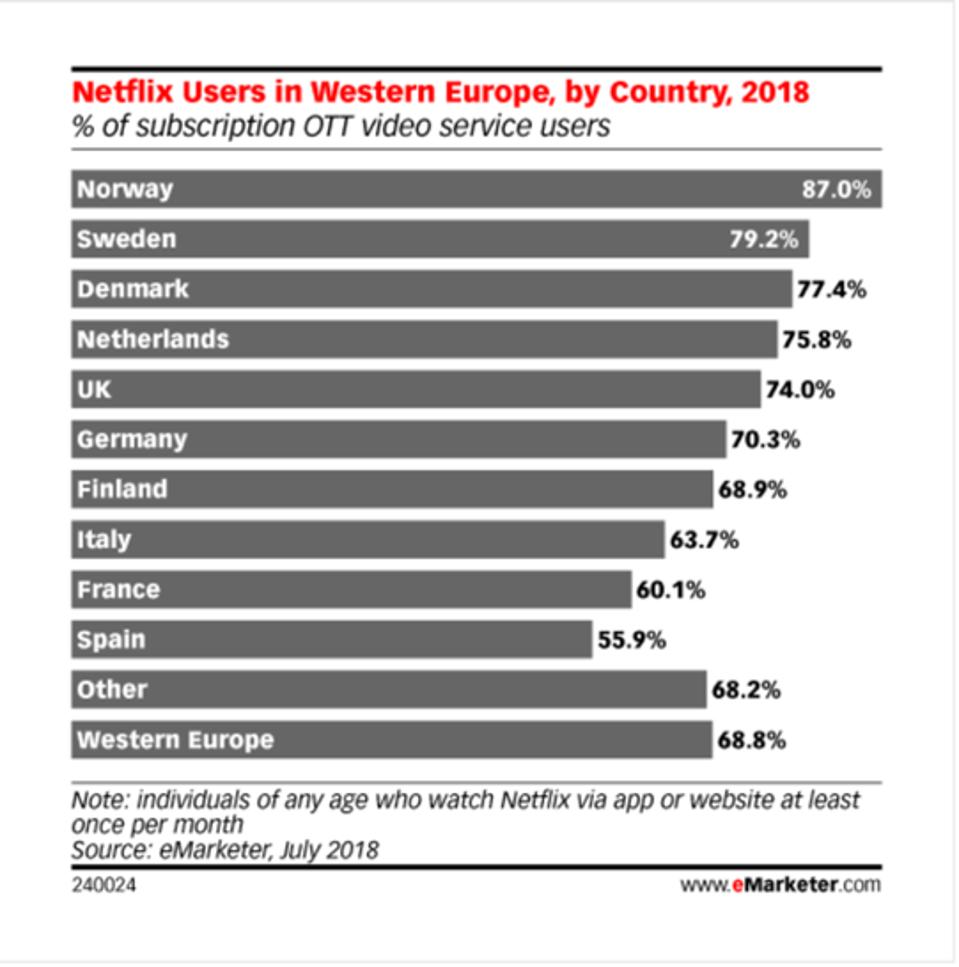 Disney forecasts Disney+ to have between 60 million and 90 million subscribers by 2024. This is despite many free promotions. Netflix currently has 158 million paying subscribers and is adding roughly 28 million more per year. With this level of penetration, for Netflix, the opportunity that remains is global.

Before third quarter earnings, I had pointed out that Netflix’s opportunity is global, and this is why the balance sheet looks frightening to value investors. Netflix’s stock price has most certainly reflected a market concerned with the company’s debt as the stock has posted 0.17% returns – or nearly 0% — over the past 12 months, while Disney and Comcast are up 30% and 31%, which is more in line with the broader market.

The company is in the red with free cash flow due to producing content for many geographic regions. However, as broadband coverage increases globally, and as 5G delivers faster speeds to developed countries, Netflix is well situated to grow its already-dominant user base and to reclaim these costs. Notably, Netflix’s operating margins stand at 18.9%. (More on broadband penetration below).

There is plenty of evidence that domestic OTT players will not be able to handle the logistics of going global. For instance, while Friends and The Office are leaving Netflix in the U.S., many of the shows will remain with Netflix internationally. According to Amy Reinhard, VP of Acquisitions at Netflix, only Disney can compete in international distribution at this time. Netflix also partners with companies like Warner Bros. for international film rights.

Asia’s population represents the majority of the world with gains of 2-3% being more impactful than double-digit gains in North America. According to eMarketer, Netflix’s penetration of Asia-Pacific will advance from 11.8% in 2018 to 14.3% in 2020.

Regions, such as China, have high barriers to entry for standalone services, yet Netflix has secured a promising licensing deal with Baidu-owned QiYi. Netflix’s share in Japan remains at 17%, despite launching in 2015, as the country has an older population that is averse to newer technologies.

International markets such as Central and Eastern Europe, the Middle East and Africa have upside specifically for acquired titles, an area of strength for Netflix.

If Netflix continues to dominate globally, then the company could be serving 50-70% of all developed countries and 20% of the developing world. With the limitations of broadcast and linear television, it is unprecedented to have a truly global media company. We will see the full effects of this once broadband penetration increases and 5G speeds bring OTT content at reasonable speeds to mobile devices. 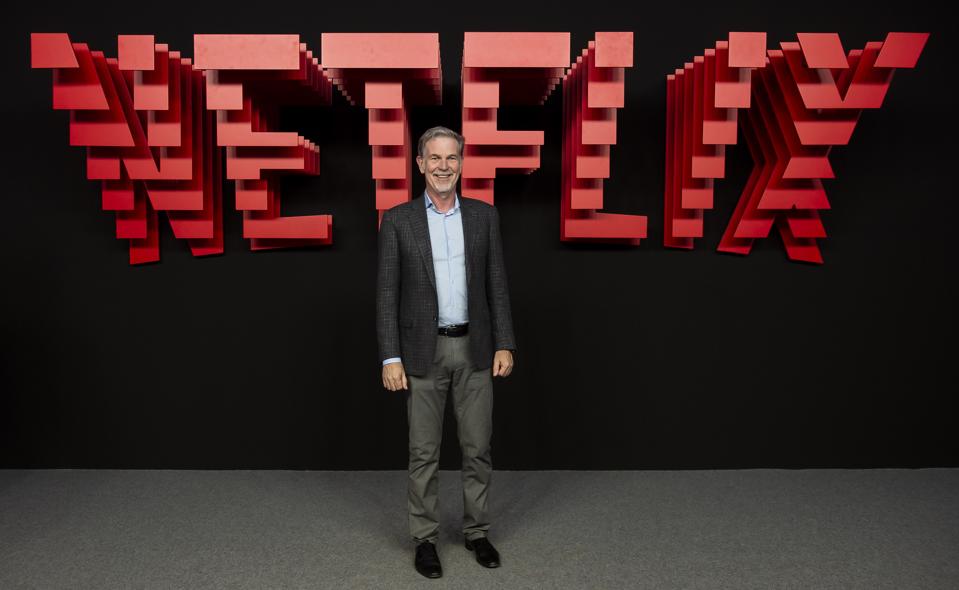 The OTT market in the United States has taken a decade to surpass pay-TV, with Hulu launching in 2007, popular set-top-boxes launching circa 2008 and Netflix streaming service launching in 2010. This growth has been assisted with the wide availability of high-speed broadband.

You can expect the global market to take twice that long, or maybe thrice. Broadband is slow to non-existent in many countries, although progress is being made. Brazil, for instance, reports a 20% annual improvement in households with 4 Mbps or greater (Netflix requires 3 Mbps or greater).

Japan and South Korea have nearly 50 million people with speeds of 100 Mbps or higher. Fiber technologies and broadband are prominent in Japan and South Korea, along with Australia, Hong Kong, Malaysia, Singapore, Taiwan and Vietnam. There is room for growth once higher broadband rates are achieved in New Zealand, Indonesia, Thailand, India and the Philippines.

Overall, OTT video is projected to grow to 6.4% of emerging market households, or 103 million in total by the end of 2019. This is up from 19.4 million in 2014. By 2025, digital growth will add over a billion middle-tier consumers for telcos, which will also help to open the market for OTT players.

Media is a universal staple for quality of life, and OTT delivers cheaper content on-demand compared to broadcast or linear television. Some forecasts place 2040 as the pivotal point when essentially every person on the planet will have internet access, up from roughly 50 percent today. With the same data, others are more optimistic and are forecasting 2030.

Netflix is not only capturing market share from cable TV attrition, but the company is also seeping into Hollywood’s addressable market.Recently, Netflix received 24 Oscar nominations, which is more than any major Hollywood studio or distributor.

High-ranking content isn’t exactly new for Netflix. In both 2018 and 2019, Netflix claimed 19 of the top 20 most streamed shows. According to Christy Ezzell, senior director of TV Time, this is partly due to Netflix’s investment in global audiences, including significant regional investments in foreign-language content and licensing partnerships. For instance, DARK and Elite are foreign-language originals that topped the top 20 list and beat out Amazon Prime on all accounts, including The Marvelous Mrs. Maisel. Notably, two of these are Marvel originals and will count for Disney+ moving forward.

These charts are incredibly important for understanding user engagement as opposed to subscriber numbers. For instance, Amazon is reportedly in the number two spot for OTT services yet is absent from the top 20 list for content. (I suspect subscriber numbers are skewed with Amazon Prime members who subscribe for the free one-day shipping or Whole Foods discounts, yet are more loyal to Netflix in their viewing habits).

Keep this in mind, as both Disney+ and Apple+ attract users with free promotions. Subscribers may sign-up yet use the service very little compared to Netflix’s level of engagement.

Interestingly enough, many criticize Netflix for continuing its lead at 87% of subscribers through 2023. Again, they are also missing the point that this is the law of large numbers, as a leader cannot hit 100% of all OTT households and now Netflix must look outside of the United States for growth.

Global OTT is not a market we’ve seen before, and there’s nothing to compare it to in terms of scale and subscription revenue potential. To think Netflix is in trouble due to domestic competitors is to misunderstand the opportunity and the slow process of OTT proliferation due to broadband access in undeveloped countries and the forthcoming 5G in developed countries.

The positive here is that the $12 billion debt overhead and competitive landscape will likely spook the market a few times in the near-term and shake up the stock price, as it did following the Q2 2019 earnings. For anyone who wants a global OTT pureplay for the long haul, this should be welcomed.

I’ve included some information regarding Netflix’s stock price below.

Netflix has held the $385 resistance zone since late 2018. This is a significant region that Netflix is looking to retest in the coming days and weeks. Netflix just reclaimed the 50-day and 200-day simple moving average (SMA), which will now act as support. It’s also worth noting that the 200-day SMA is signaling that the long-term trend is pointing downward. 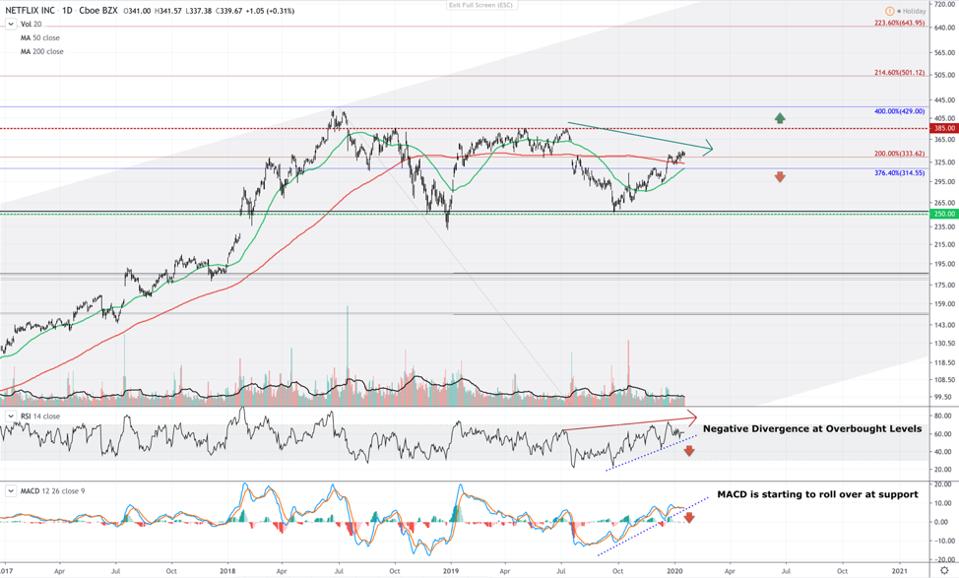 In the chart above, you can see decreasing volume as Netflix approaches the $385 resistance. Although the internals of Netflix are showing a clear uptrend, which is supported by the MACD and the RSI, there is also negative divergence with the price making lower highs while the RSI makes higher highs into overbought territory. It’s important to monitor whether the internals break down through their respective uptrends along with the price.

Netflix is trading between support at the 200-day SMA and resistance at $385. If Netflix fails before testing $385, the structure suggests a setup that can see a retest of the October lows. This structure can be viewed as a reverse cup & handle pattern or, from Elliott Wave, a 1-2 i-ii structure, which will be confirmed below the $250 support. This level will need to be monitored closely if we see a renewed downtrend. However, if Netflix can break above $385 and close with heavy volume above this region, we could see new highs.

Please note: The stock analysis and pricing information provided are opinions and not financial advice. Please consult your financial advisor before investing in any stock. Disclaimer: Beth Kindig does not own Netflix shares at this time yet may enter a position in the future.