Apple is releasing new headphones next month, it seems, alongside an updated iPad and a new iPhone. There have been rumors already, not least concerning something apparently called AirPods Pro Lite, and a striking new accessory for iPad Pro. 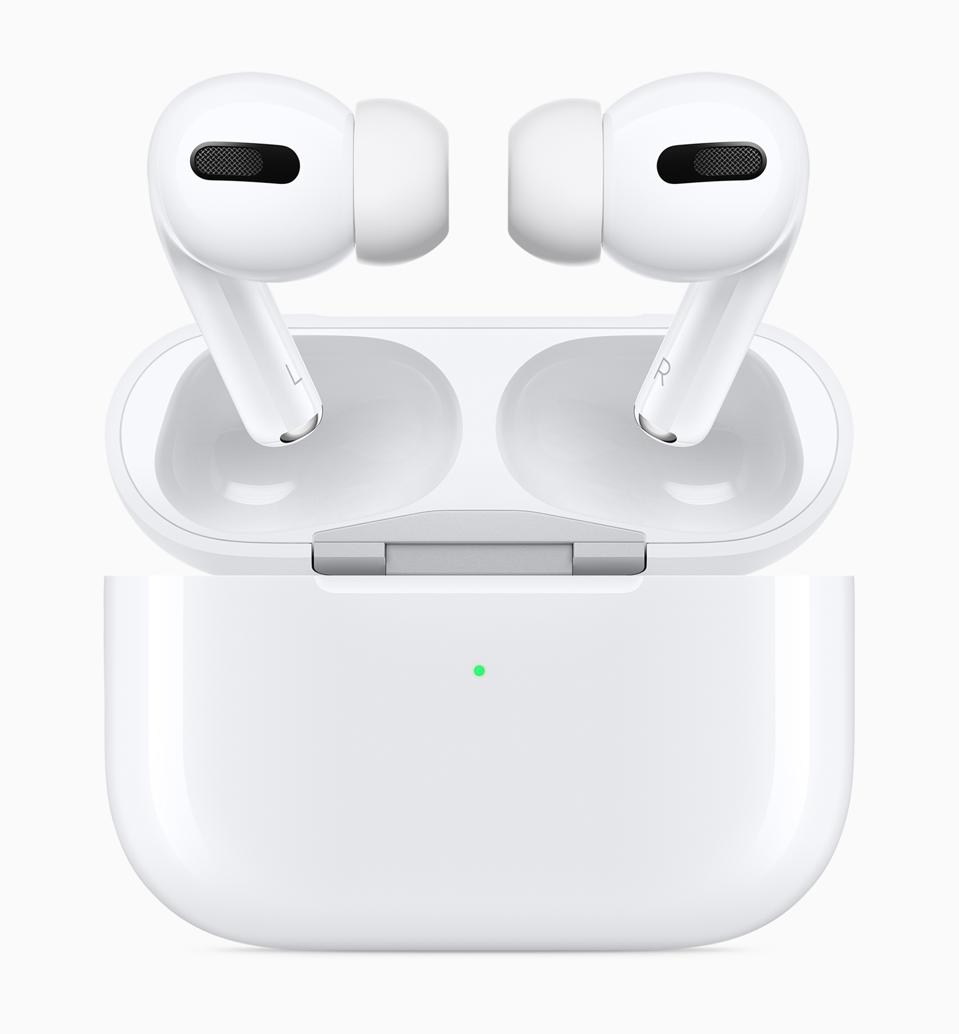 The current AirPods Pro, but what’s just around the corner?

Now, Jon Prosser, creator of Front Page Tech, has been reporting that several Target employees have been in touch with him about something in the company’s systems intriguingly called Apple AirPods (X Generation).

Multiple Target employees have started reaching out to me about this Showing up in their systems and on UPC scanners is this mysterious “Apple AirPods (X Generation)” listing, priced at $399. Potentially Apple’s over-ear “StudioPods” headphones. Launch soon (March)? 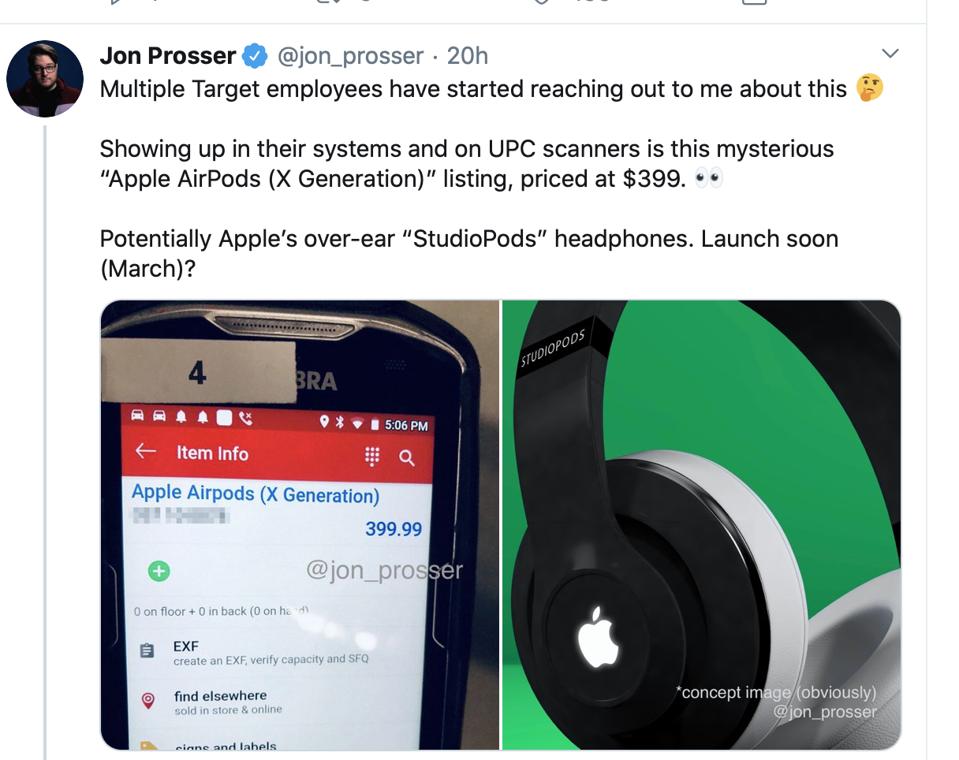 Well, this is certainly something different. It’s not AirPods Pro Lite, we can be certain of that, assuming the price is right. Given that current AirPods Pro cost $249, it’s inconceivable that a Lite version would cost more.

So, what is this? Prosser suggests that over-ear Apple headphones, something that has been rumored before, may be what’s referred to here. He also believes that if the product is in Target’s system now, then the retail date is coming very soon, likely as soon as March.

That ties in with rumors of an Apple event in late March – you can read here when I think it will be, assuming it happens – when Apple seems likely to announce a new iPhone and iPad. The new item would be alongside those.

The X Generation reference is not as exciting as it sounds – AirPods X is unlikely to be a name that Apple will use. Maybe, if the headphones had appeared at the same time as iPhone X, but nowadays it’s not a probable name.

Prosser notes that there are three versions listed in the Target system, which almost certainly means three colors. Prosser suggests space gray, white and gold. My guess is that they will tally with three of the colors of the iPhone, whether the iPhone 11 Pro or iPhone 11. So, yes, space gray, gold and silver is one possibility. Or how about black, white and purple if we’re following iPhone 11 colors?

I think the Pro colors are more likely because, at this price, I’m sure they will include noise-canceling, so Pro seems right. And expect the finish to be matte, like the iPhone 11 Pro.

Prosser has tweeted again since then:

Also listed in Target’s systems is an “iPod Touch X generation” and a display unit “iPad 10.5 X” The “iPod Touch X” is almost CERTAINLY the new $400 iPhone. It comes in 6 SKUs, so possibly 6 color options. The “iPad 10.5 X” is most likely the new iPad Pro. 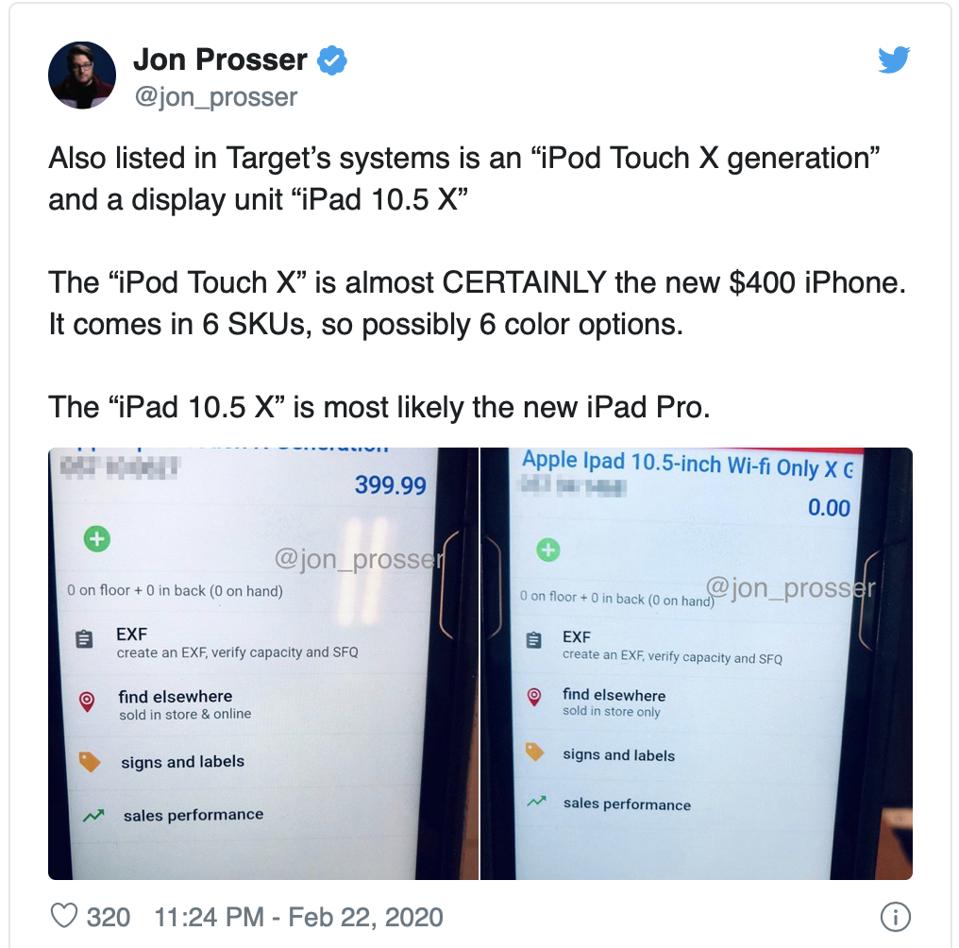 I have a slight disagreement with Jon Prosser here, about the iPad. I don’t believe it will be an iPad Pro, as he does. Although there may be a new Pro soon, assuming other details are correct, then this isn’t it.

The iPad Pro screen size is 11in – there’s also the larger 12.9in model – and I don’t think Apple would shrink the screen on the next Pro. That leaves two options, iPad Air and iPad.

Well, it’s the tenth anniversary of the iPad release in the coming weeks and I believe Apple will want to celebrate it in style with a new model. The entry-level iPad was upgraded with a screen size increase to 10.2 inches last Fall so, lovely though it would be, the thought of another screen change in a matter of months is hard to imagine.

No, I think the iPad that Prosser has brought to our attention is a new iPad Air, which is pretty exciting in itself.

Apple will tell us the answers to all these questions soon, either through an event or website update. Many pundits, including Prosser, say that Apple hasn’t decided yet whether to hold an event, but either way, unless issues with Chinese production levels mean the products are delayed, we can expect to know the answer soon.

How Apple And Google’s COVID-19 Tracing Works While...

Sheila Morovati, Founder Of The Non-Profit Habits Of...