Breaking
Sunday’s Google Doodle Is Actually About Google
Office Of The Comptroller Of The Currency Chief...
Source Code For Multiple Windows Operating Systems Publicly...
Why Forgettable Pfizer Really Is A Great Value...
Hot For The Holidays? Amazon Home Drone, Kid...
Best Small Business Loans
The FAAMG Stocks Drive The Markets
Mall Of America Extends A Hand Of Unity...
Surprise Samsung Galaxy S20 FE Beats Google Pixel...
After Apple And Tesla, Berkshire And Amazon Should...
Is It Wrong To Be Rich In Poor...
‘C&C’ Is 25: How ‘Command & Conquer’ Revolutionized...
Archeologists Vs. Spirit Mediums Exhuming Human Remains In...
Blow To Bitcoin As Portnoy Warns Cryptocurrencies Are...
What an Effective Business Cloud Must Include
5 Ways to Make Running a Business Easier
Home Technology New Apple Documents Reveal Gaming Keyboard For MacBook Pro
Technology

Following the replacement of the butterfly keyboard with a ‘magic’ scissor-switch based keyboard on the 16-inch MacBook Pro, another keyboard innovation from Apple has been published. Turns out the R&D team have been working on a colorfully lit keyboard.

The details come in a patent titled ”Mixed input lighting using multiple light sources with switchable operational state” which was published this Tuesday, 7th January 2020. It talks about using multiple LEDs with varying intensity that can be used to alter the tone and color of a light behind an individual key. These LEDs could be white or RGB LEDs, allowing for color to be controlled on a per-key basis.

Strictly speaking a keyboard with variable colors and lighting has a multitude of uses. They can show different editing commands in a media suite, they can be guide towards hotkeys in a DJ application, or help with typing by changing all the keys and react with different control and modifier keys. Apple has already show it is willing to play around with conventional keyboards with the Touch Bar replacing the function keys in the MacBook Family.

If you look around the various keyboards, including those on laptops, desk-bound standalones, and detachable keyboards laptops and smartphones, they are biased very heavily towards the gaming market.

With pre-configured keyboard color schemes available for all the top titles in manufacturers’ software suites, the world of gaming is awash with colorful guides tot improve your performance. Sometimes the colors are not restricted to the keyboard. Razer has pretty much built up its lifestyle brand through a glowing three-headed snake and adding custom coloured lighting to everything, from practical keyboards and mice, to kitty ears and tea coasters. But the real action remains on the keyboard as gamers continue to game and look for a slight edge. 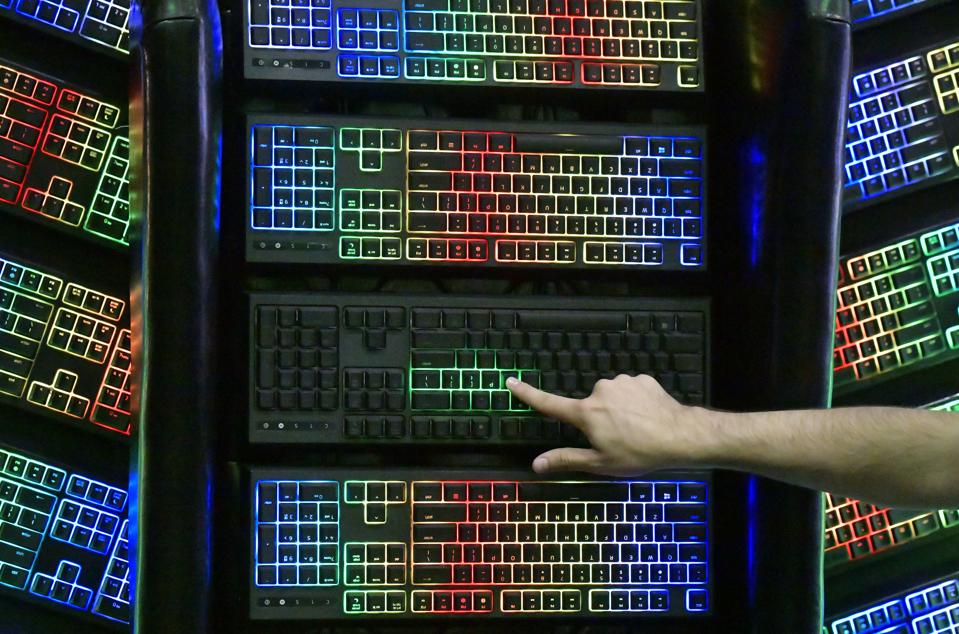 A volunteer touches an illuminated keyboard at the booth of Razer during a press day at the IFA, the … [+] world’s leading trade show for consumer electronics and home appliances, in Berlin on September 4, 2019. – The fair runs from September 6 to 11, 2019 in the German capital. (Photo by Tobias SCHWARZ / AFP) (Photo credit should read TOBIAS SCHWARZ/AFP via Getty Images)

Occam’s Razor is easy enough to wield here. Apple is working on adding color to individual keys, and the primary use of colourful keyboards is in gaming.

Which means that the buzz in the last few weeks about Tim Cook and his team working on a gaming Mac has just picked up another tick in ‘likely’ column.