Breaking
‘Game & Watch: The Legend Of Zelda’ Will...
How to Get Results from Broken Link Building
Florida Supreme Court Tells The American Bar Association...
How to Write Perfect Paid Social Media Marketing...
How Restaurants Can Design a More Sustainable Food...
Expenses That Small Business Owners Need to Be...
How You Can Make Saying Goodbye To The...
Biden To Meet Royal Family At Cornwall’s Eden...
It’s Going To Be Emotional — Going International...
Peer Mentoring For Students: STEM & Buds
7 PR Trends in 2021: The Story So...
Google Plans Radical New Google Pixel Smartphone Upgrade
Where Did COVID Come From?
Ride To Growth With A Business Vehicle
C3.ai’s Tom Siebel: How To Scale AI
Moz Acquired by iContact Marketing Corp
Home Technology New Brand Targets US With Innovative OLED And 8K TVs
Technology

New Brand Targets US With Innovative OLED And 8K TVs

It’s starting to look like one of the biggest trends of the imminent CES in Las Vegas is the growth of Chinese influence on the global TV scene.

It’s already been reported by CNET that Chinese brand Konka is bringing an OLED TV to market in 2020. And now another China-based brand, Skyworth, has revealed that it’s going to be launching not only a series of ‘self-manufactured’ ultra-thin OLED TVs in the US in 2020, but also its first 8K TV.

Unveiled at a January 5 press conference, Skyworth’s W81 series are cheekily (given that it’s a name originally coined by LG) dubbed Wallpaper OLED TVs in Skyworth’s press materials, on account of their super-slim 4.6mm screen depth. 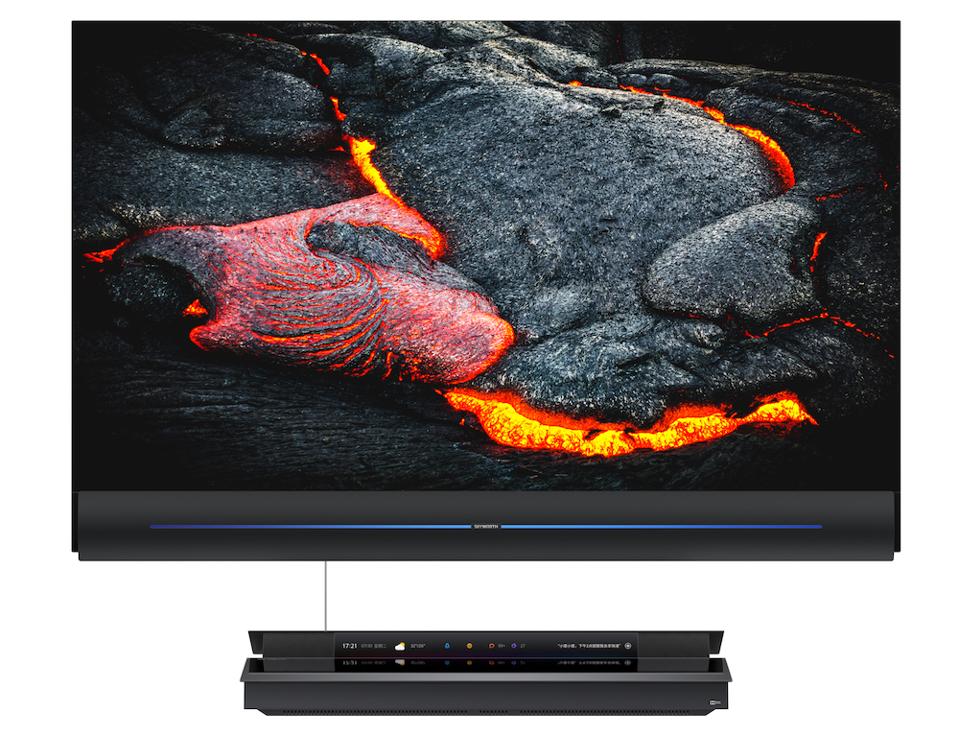 As with LG’s original Wallpaper OLED TVs, the W81 models attach to your wall using an invisible magnetic mounting system, and ship with an external box that provides speakers, connections and video processing. This video processing is Skyworth’s own, splendidly named Chameleon Extreme AI chipset, supported by the brand’s interesting-sounding new SOBiF Non-Afterimage Technology that’s claimed to deliver ‘close to zero residual images on the screen’.

The speaker box you get with the premium W81 Pro model carries two extra up-firing speakers that work in tandem with the main channel in the front and an external wireless bass speaker to deliver a 2.1.2 Dolby Atmos system. The W81 Pro’s audio benefits, too, from Skyworth’s (again brilliantly named) Wonder Audio Sky Echo processing, which apparently “creates realistic sound effects that hit viewers from all angles, including from above, by sending high-fidelity soundwaves around the viewing space to create an immersive audio space.”

The W81 Pro doesn’t only differ from the W81 with its up-firing speakers, though. Remarkably it also boasts a second 21-inch wide second that pops up out of the top of external speaker box. This syncs with the main screen so that when one is being used, the other can seamlessly deliver information about your smart home environment, as well as time, date, weather, IoT status updates, memos and other information.

The W81 Pro can even be bought with yet a third supplementary display, available in 4- or 10.1-inch sizes. This is powered by Skyworth’s Swaiot (Smart World AI/IoT ) OS, so that it can automatically sync with the program being played on the main TV screen. This third screen can also be used to voice control your smart appliances.

As if all this wasn’t already innovative enough, all the W81 series carries a built-in, second-gen TrensAI Eye 2.0 sliding 12MP AI camera with a high-end Sony image sensor, independent image signal processing (ISP) chip, autofocus and an F1.8 aperture that enables quality photos to be taken in dim light.

It has to be said that some of the W81 series features have more of a Chinese than US flavour to them, but they certainly make Skyworth’s entry into the OLED space stand out. 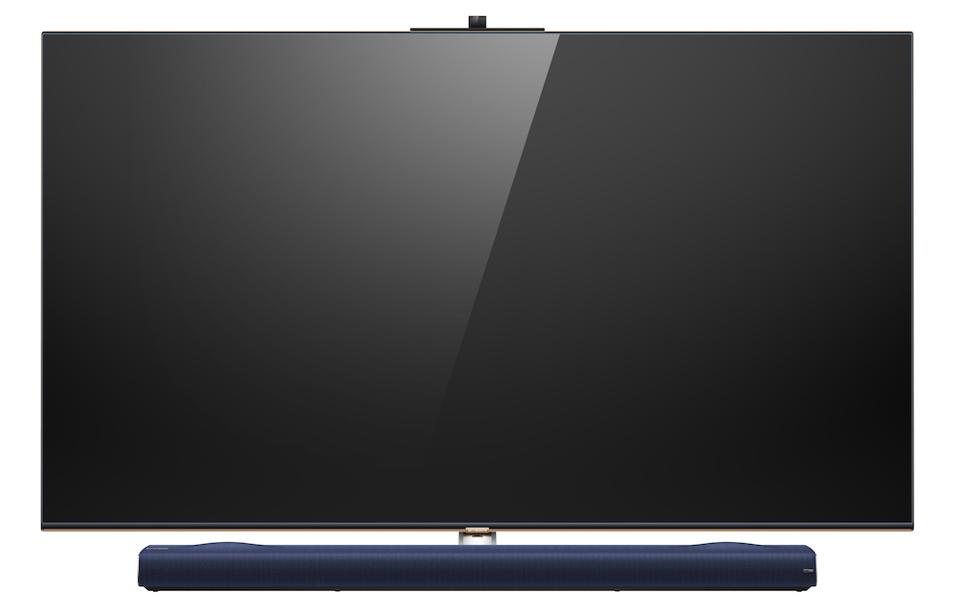 Skyworth’s new 8K TV is the 75-inch Q91. This LCD model is another striking looking set, boasting an unusual blue finish to its bezel and built-in soundbar, offset by a bronze trim.

It’s worth noting that the Q91 LCD screen uses IPS technology, and so may suffer with the contrast/backlight control issues associated with that screen type. I’m trying to find out what backlight configuration the set uses, and will update this story if I hear anything. 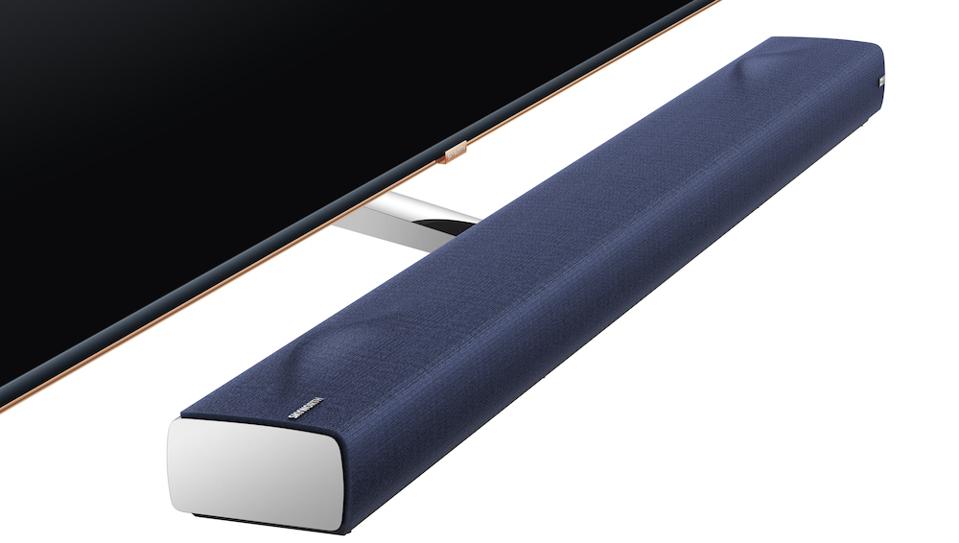 The built-in soundbar supports Dolby Atmos in a 2.1.2 configuration, thanks to two up-firing drivers on its top edge.

Skyworth hasn’t yet revealed any pricing or distribution information for its US-bound OLED and 8K TVs. It remains to be seen, too, whether Skyworth’s picture processing can really compete with that of the more established TV brands. Nonetheless, on paper, at least, Skyworth’s announcement certainly seems to pile more pressure on the traditional TV dominance of the Japanese and Korean TV brands.