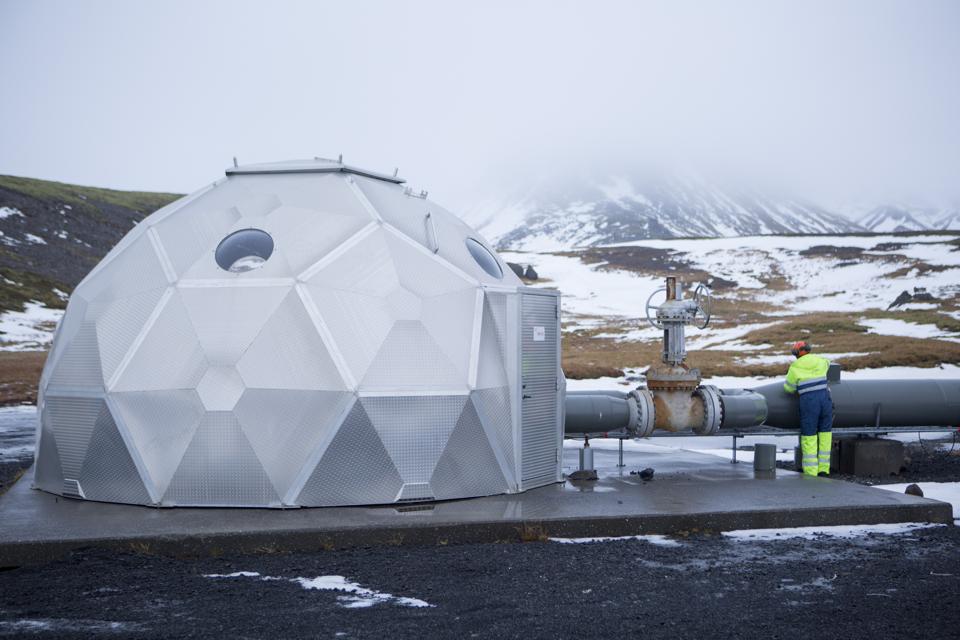 This carbon injection well near Reykjavik, Iceland captures CO2 from the air and fixes it into … [+] basaltic rock. Innovative carbon-capture projects are expected to proliferate in the U.S. once the IRS issues guidance on a tax credit. (Photo by Melanie Stetson Freeman/The Christian Science Monitor via Getty Images)

Innovative carbon-capture projects are ready to launch in the U.S., according to experts gathered yesterday by the Atlantic Council, but they are waiting for IRS guidance expected since fall.

The guidance should resolve uncertainty over how companies can take advantage of the carbon capture tax credit in Section 45Q of the Internal Revenue Code.

“We’re all waiting with bated breath for the IRS to issue its guidance, but we continue to see, among the folks that we’re talking to, that everyone’s getting ready for that,” said Jeff Erikson, general manager of the Global Carbon Capture and Storage Institute.

“While there haven’t been an awful lot of announcements about new projects yet,” he said, “we expect to see a significant push and several announcements in the six- to 12-months after the guidance is finalized.”

Erikson and Lee Beck, a senior advisor at the institute, offered a preview yesterday of what those projects might look like:

Smaller companies are beginning to get involved, Beck added, new technologies and new partnerships, similar to the recent alliance in Switzerland between Svante, a company that captures emissions at source, and Climeworks, which captures from the air.

“We’re seeing all these new and exciting developments, which we think is the next generation of carbon capture.”

Experts in carbon capture are excited—added Janet Peace of the Center for Climate and Energy Solutions—in part because CCS has long lagged behind other climate technologies.

“There’s all kinds of different activity in different places in the world,” Peace said. “It’s exciting. It’s not where we need to be—I’m not going to say it is, because it isn’t. We certainly need more policies, we need more actors, we need more emphasis. I mean, it’s exciting, and we’re starting.”

CCS is taking off now in part because of the IPCC’s 2018 report on 1.5º of global warming. In the wake of that report, some governments increased their ambition from a 40% or 50% reduction in emissions by mid-century to net-zero emissions.

Much of the growth is expected to come in the U.S., not just because of 45Q but because of California’s new low-carbon fuel standard.

“Coupled with 45Q is the low-carbon fuel standard, which in California is driving an awful lot of interest in investment in carbon capture and storage,” Erikson said. “If you stack those two policies, those organizations that store CO2 can achieve about $250 per ton of CO2.”

The IRS is expected to break the dam on U.S. projects any day now.

“First, we’ll see more carbon capture on natural gas power plants,” Erikson said, “and in many places the license to operate for natural gas-fired power plants will be dependent on capturing their CO2.”

Second, many projects will capture methane to produce hydrogen, storing the CO2. Bioenergy and direct air capture will follow, and the production of new products from captured carbon.

The Next Harmful Immigration Move Against International Students