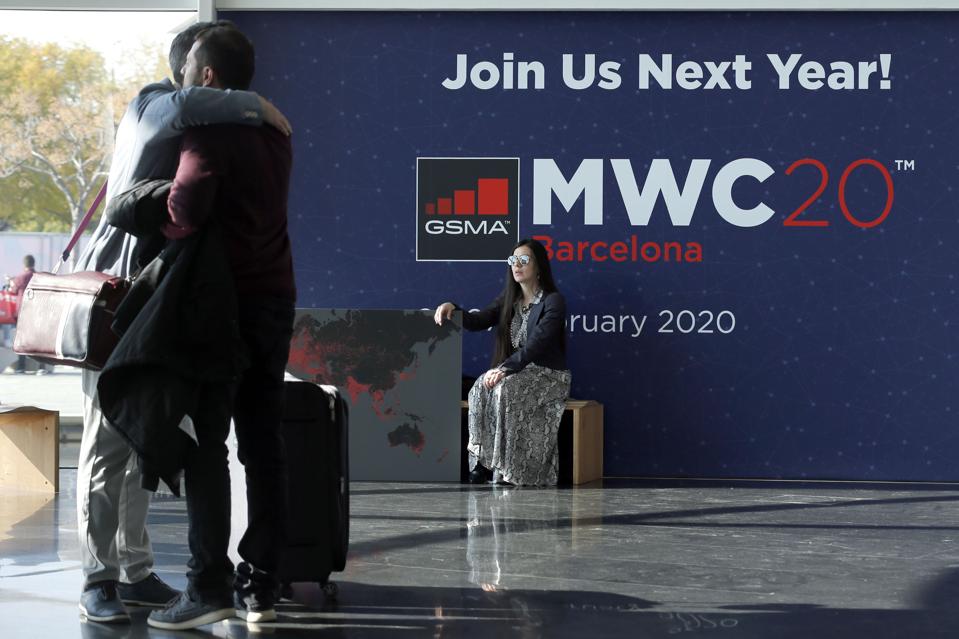 This year’s Mobile World Congress (MWC) will be in Barcelona from February 24 to 27, 2020. But how … [+] might the new coronavirus outbreak affect it? (Photo: PAU BARRENA/AFP via Getty Images)

Novel mobile technology is one thing. But a novel mobile virus? That latter is apparently what some major tech companies are afraid of seeing at this year’s edition of the Mobile World Congress (MWC). The ongoing novel coronavirus (2019-nCoV) outbreak has prompted Amazon, Ericsson, LG, Sony, and other regular MWC participants to say no mo’ to the 2020 version of what’s billed as the largest mobile event in the world. So, the big question is, “Alexa, does this make sense? Is avoiding such mass gatherings a good idea?”

If you’ve somehow been on the toilet since mid-December 2019 without access to any mobile devices, here’s what’s been dominating the news: an ongoing novel coronavirus (2019-nCoV) outbreak. It started in Wuhan, China and has already infected over 42,000 people and killed over 1,000. The newly discovered virus that is still a bit of a mystery has raised real concerns around the world as well as a whole lot of misconceptions, as I described previously for Forbes.

It has also prompted Sony to make the following decision: “Sony has been closely monitoring the evolving situation following the novel coronavirus outbreak, which was declared a global emergency by the World Health Organization on January 30th, 2020. As we place the utmost importance on the safety and well-being of our customers, partners, media and employees, we have taken the difficult decision to withdraw from exhibiting and participating at MWC 2020 in Barcelona, Spain.”

So, no Sony. No Ericsson, No LG. And no Amazon. These are just some of the companies that are taking their toys and staying at home. 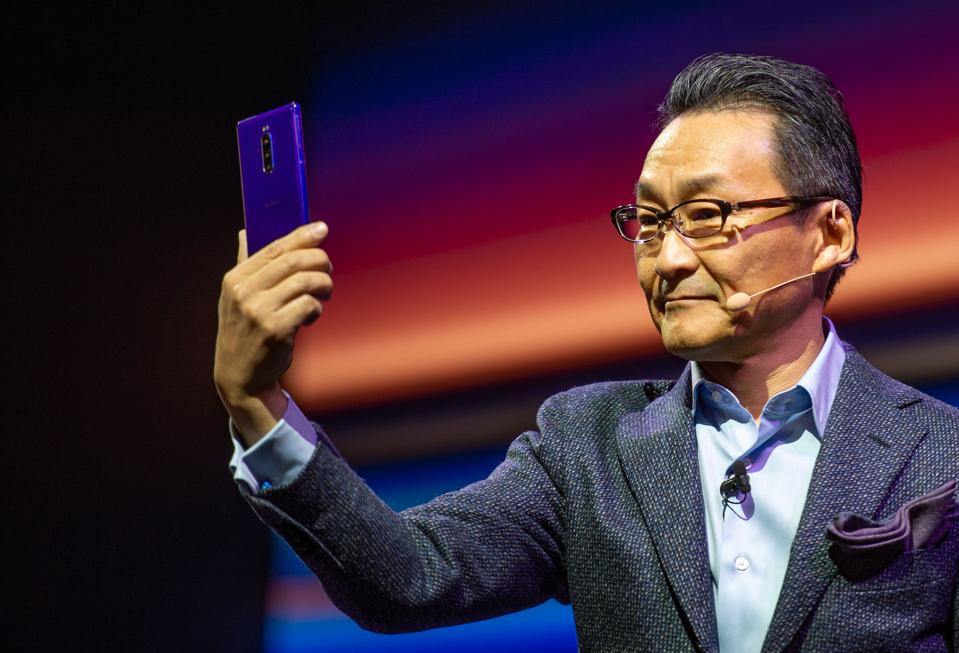 That’s obviously not great news for the GSMA, the organization that’s putting on this shindig from February 24 to 27. The GSMA has insisted that they have no plans of canceling the event and instead detailed in a press release the precautions that the MWC will take. The precautions seem fairly reasonable and what an infection control specialist would recommend.

One set of precautions will be trying to keep anyone who has a higher risk of being infected away from the event. Therefore, if you are from China’s Hubei province, the epicenter of the outbreak, time to make other plans. You won’t be allowed into the MWC. That also applies if you’ve been in China, anywhere in China, within 14 days prior to the start of the MWC. Even if you’ve never been anywhere near China, you’ll still have to “self-certify” that you haven’t been in contact with anyone who’s infected. Oh, and if you are hot, meaning fever-wise and not looks-wise, routine temperature screening at the meeting may keep you from entering.

That’s not all. The GSMA has promised to do more cleaning and disinfecting than usual, especially in areas that get touched more often, and provide ways for attendees to clean and disinfect themselves. If you are wondering what this “wash your hands” thing is, the MWC will provide cleaning and hygiene reminders and training. Oh, and this should be welcome news if you’ve ever had to speak after a prior speaker “got to first base” with the microphone. The GSMA will have a “microphone disinfecting and change protocol for all speakers.” Yeah, having to use a moist microphone that smells like saliva isn’t too fun. 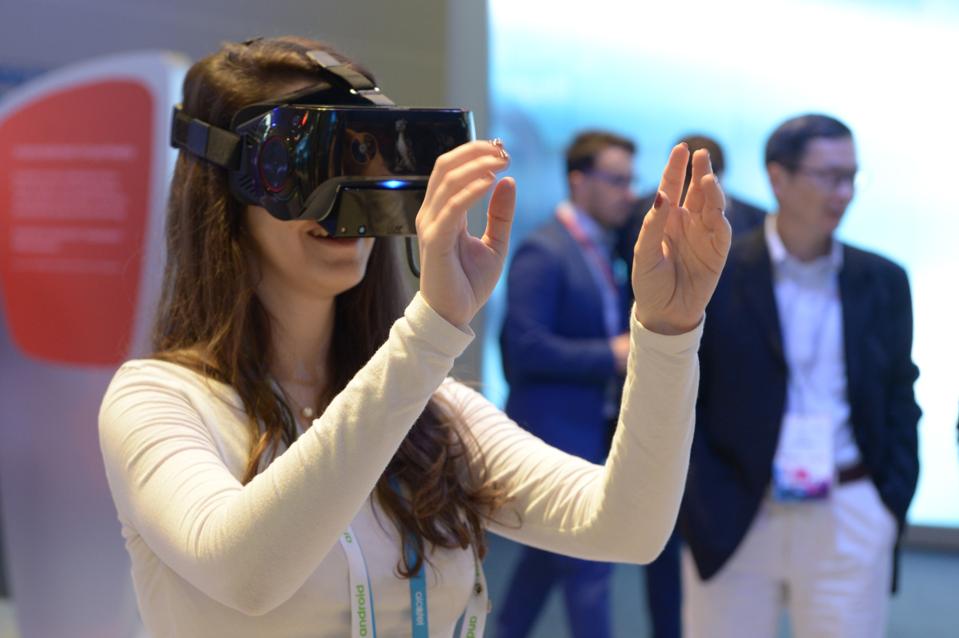 The MWC will include lots of product demos, which will then require proper cleaning and disinfecting … [+] procedures. (Photo by Andrej Sokolow/picture alliance via Getty Images)

Additional measures will include bolstering the number of security and medical personnel available and providing public health guidelines and advice to local businesses. Then, there will be the “no-handshake policy.” That will means lots of waves, ‘sup head nods, one-finger points, winks and gun gestures, “all right, all right , all rights,” and deep meaningful stares instead. This, of course, will be encouraged and not strictly enforced. It’s not as if you will be escorted out if you have the audacity to actually shake someone’s hand.

Are all of these precautions comforting enough for you? Or will you go the way of Amazon and skip all such mass gatherings? Certainly, going to mass gatherings in Wuhan City is not wise right now and probably not even possible since the Chinese government has been fairly aggressive in keeping people off the streets there. But, if you haven’t figured it out from a map or your Uber app, Barcelona, Spain, is not right next to Wuhan, China. It is about 9,407 km away, which would be a really expensive Uber ride. The question then is should you avoid all mass gatherings, even those that are far away from the epicenter of the 2019-nCoV outbreak?

Sure, the 2019-nCoV has already spread beyond China as shown by the following AFP News Agency tweet :

But keep in mind, the vast majority of cases have still been in China. Just take a look at the number of cases that have appeared in other countries.

Plus, the MWC is far from the only mass gathering that is and will be occurring. Sporting events, church services, parties, and other conferences continue to bring together many people. Surely, Amazon and other companies aren’t pulling out of every meeting.

Are companies concerned about this statistic mentioned on the GSMA press release: typically 5-6% of all MWC attendees (that’s 5,000 to 6,000 people) have come from China? Perhaps. Remember, though, China has over 1.39 billion people in a piece of land that is over 9.38 million square miles. While there have been over 40,000 cases of infection in China, that is still only a small fraction of all the people in China. Believing that everyone from China may be infected with 2019-nCoV would be like believing that everyone from America puts Tide Pods in their mouth, not that the two are related.

Additionally, avoiding or cancelling mass gatherings may not do a whole lot to slow or mitigate epidemics. As long as other interactions are still occurring at workplaces, schools, and the community, contagious viruses can still find other venues to spread. Just look at what our computational modeling found during the 2009 H1N1 influenza pandemic. For example, a publication in BMC Public Health detailed a study that was a collaboration between our team and a team at Georgia Tech University (Pengyi Shi, PhD, Pinar Keskinocak, PhD, and Julie L Swann, PhD). The study entailed developing a computer model that simulated the population of Georgia (the state and not the country) and their daily activities and movements to and from different locations. Simulation experiments then introduced a novel flu virus into the population. No one had vaccine-induced immunity to this virus,which meant the virus could spread rather rapidly, sort of like the coronavirus but not exactly. We ran simulation with and without canceling all mass gatherings at varying times. That’s all large meetings, concerts, and sporting events in the state of Georgia. In most situations, canceling such events did little to slow or reduce the spread of the virus. They proved useful only when the cancellations occurred within the 10-day time period before the peak of the epidemic occurred. In such cases, canceling such gatherings couldn’t really stop the epidemic but could decrease the number of people who get infected by as much as 10%.

Rather than canceling or avoiding mass gatherings, more universal adoption of the strategies to be used by the MWC would probably be more effective at preventing the spread of the novel coronavirus. Again this includes identifying those who may be a risk for carrying the virus (and “looking Asian” does not automatically put you in this category), enhanced cleaning and disinfecting, encouraging hand washing, and minimizing activities that may transfer the virus such as dirty handshakes. Like it or not, our world is already too heavily connected and mobile to go back to the days where avoiding certain people was even possible.

Have The Next Big Idea? Wichita Will Roll Out The Red Carpet For You

Do Stakeholders And CEOs Want The Same Thing?...

DAZN Trying To Deliver A TKO To ESPN+

Spotting Inflection Points in Your Industry