Breaking
Parrot Plumage Color May Be Linked To Body...
Recent Precious Metals Dip A Buying Opportunity
Looking For Venture Capital? Here’s How One 50+...
Growing Your Retirement Money Using 401(k) Dollar-Cost Averaging
Wellness Exec Abby Miller Levy Partners With Venture...
Microsoft Teams Issues Strike To Zoom With Tidal...
What’s Coming For The S&P 500 In October
4 Ways You Can Showcase Empathy With Your...
A $22,000 Microsoft Surface Will Soon Be For...
Zooming In – Should SMEs Invest In The...
iOS 14: The Surprising Security Risk Of Sharing...
How A Break From Lord Sugar Changed The...
Sunday’s Google Doodle Is Actually About Google
Office Of The Comptroller Of The Currency Chief...
Source Code For Multiple Windows Operating Systems Publicly...
Why Forgettable Pfizer Really Is A Great Value...
Home Business New England Patriots Will Wait For The Tides To Turn At Quarterback
Business 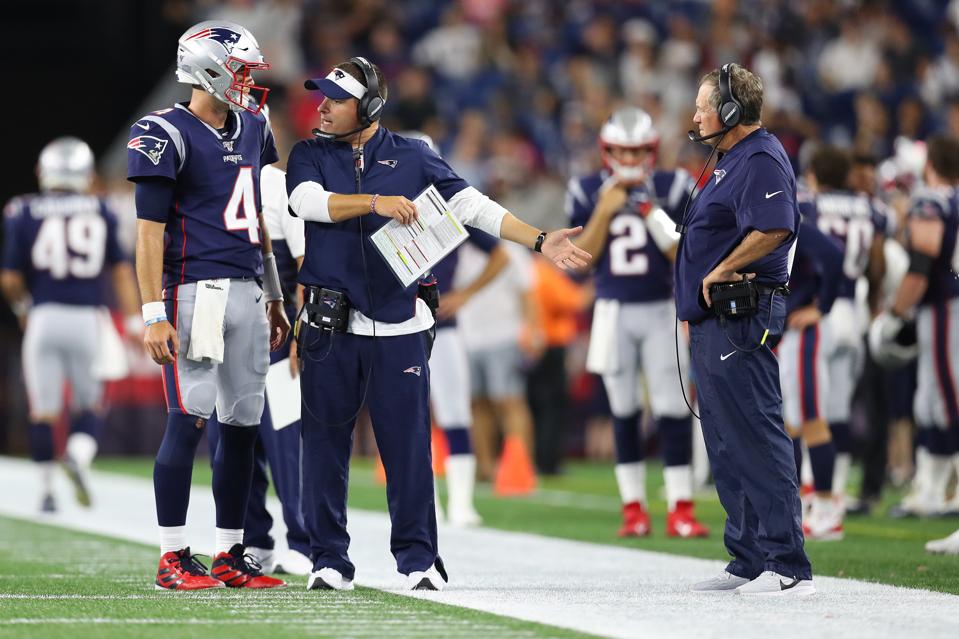 Jarrett Stidham is among three in contention to become the next starting quarterback of the New … [+] England Patriots. (Photo by Maddie Meyer/Getty Images)

As far as the New England Patriots can tell, three are in the tide to start at quarterback.

And with training camp beginning with strength and conditioning, Cam Newton, Jarrett Stidham and Brian Hoyer haven’t yet returned to the harbor.

“We’re in Phase 1,” head coach Bill Belichick said during his video conference on Friday. “We’re presenting a lot of information, going through films and we have a daily walkthrough and that’s about it. Again, the restart of football is going at a slow pace right now. The training is ahead of the football, so that’s what we’re doing.”

That will change once the first official practice behind Gillette Stadium arrives on Aug. 12. The pads will be in the locker stalls by Aug. 17. But a preseason schedule worth of evaluations won’t be for New England’s staff.

And by the Sept. 13 matinee opener versus the Miami Dolphins, someone other than Tom Brady is set to be behind center.

“It’s a new year,” Patriots offensive coordinator Josh McDaniels told reporters. “You know, having coached Tom for a long time, there’s going to be a great competition. There’s a great energy right now in our room and within our offensive group just to get out on the field and do our walkthroughs and do their working out and all those things they’re able to do now. And I think there’s an anticipation and excitement for us to have an opportunity to actually practice. So, we haven’t seen anybody do anything relatively speaking from a football perspective yet because we’re not at that phase yet of training camp, but it’s been good getting to know everybody.”

Newton, the former BCS national champion, Heisman Trophy winner, top overall pick and NFL MVP, started a total of 131 games for the Carolina Panthers. Stidham attempted four passes as a rookie by way of Baylor and Auburn last campaign. And Hoyer, whom the fourth-rounder beat out for the backup role by Labor Day weekend, returned in March after being released from the Indianapolis Colts. 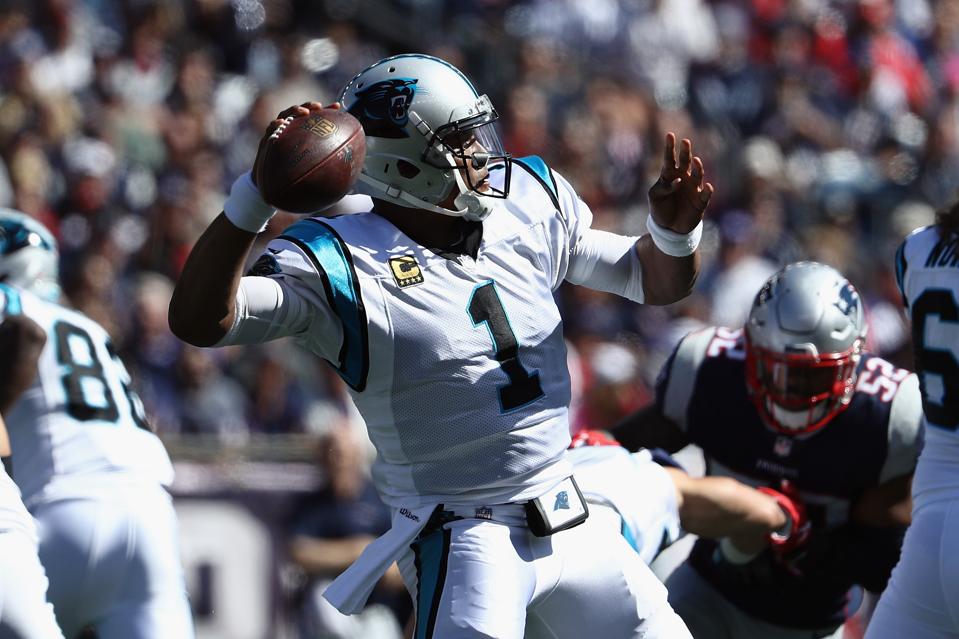 Newton’s contract with New England comes after a 2018 that ended with shoulder surgery and a 2019 that ended with a Lisfranc fracture that required the same. It carries a base salary of $1.05 million with $550,000 guaranteed for a player who once carried an extension that exceeded $100 million.

A maximum value of $7.5 million when factoring in cumulative per-game roster bonuses and incentives is ahead for the 31-year-old.

As for the quarterback atop the projected depth chart before Newton’s arrival, Stidham still feels as prepared as he did then.

Even if it’s been a ride for the AFC preseason leader in passing yards from a summer ago.

“Absolutely. I mean, I think I’m definitely ready,” added Stidham, 24. “I think I’ve put in a lot of work this offseason to really improve mentally, physically in a lot of different areas. But at the end of the day, I’m extremely excited to compete with Cam and Hoy as we go forward in training camp and get into the season and things like that. I’m really looking forward to the competition. I love competing in whatever it is, so I’m really looking forward to it.”

As is Hoyer. The mentality remains unchanged for the 2009 rookie free agent, now 34 and returning for his third stint in New England. 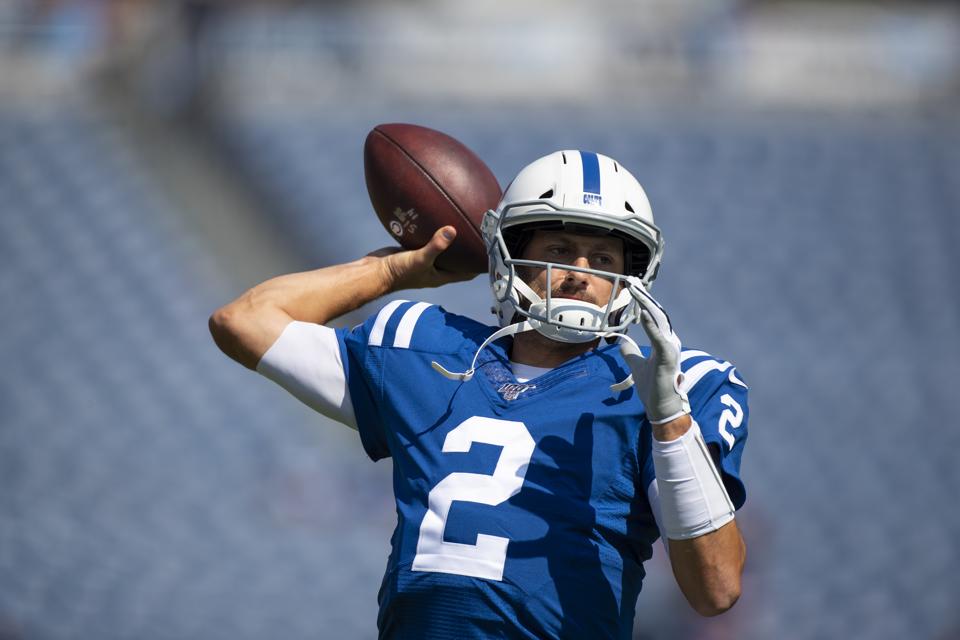 Brian Hoyer returns for his third stint after spending the 2019 season with the Indianapolis Colts. … [+] (Photo by Brett Carlsen/Getty Images)

“I think for me, you’re competing every day you go out. Regardless of what the spot is, there’s always a competition,” Hoyer said. “Bill has said that numerous times, ‘You’re going to earn what you get.’ For me, it doesn’t matter if there’s 15 guys in the room. I’m always competing. When Tom was here, I was competing for the starting job. Now I was probably never going to get that, but I always competed like I was going to try to beat him out. That’s the only thing I can do to make myself better.”

A rising tide lifts all boats.

Perhaps the same goes for quarterbacks.