A group of six Republican senators sent a letter to Secretary of State Mike Pompeo on Wednesday calling for a harsh stance against Saudi Arabia and current Saudi oil policy. In particular, they called attention to the State Department’s attention to recent Saudi actions that sent the price of oil plummeting and threatened many American producers. Whereas a year and a half ago President Donald Trump was asking Saudi Arabia to pump more oil (to lower gas prices), today American producers desperately need Saudi Arabia and others to curtail production and achieve higher oil prices. 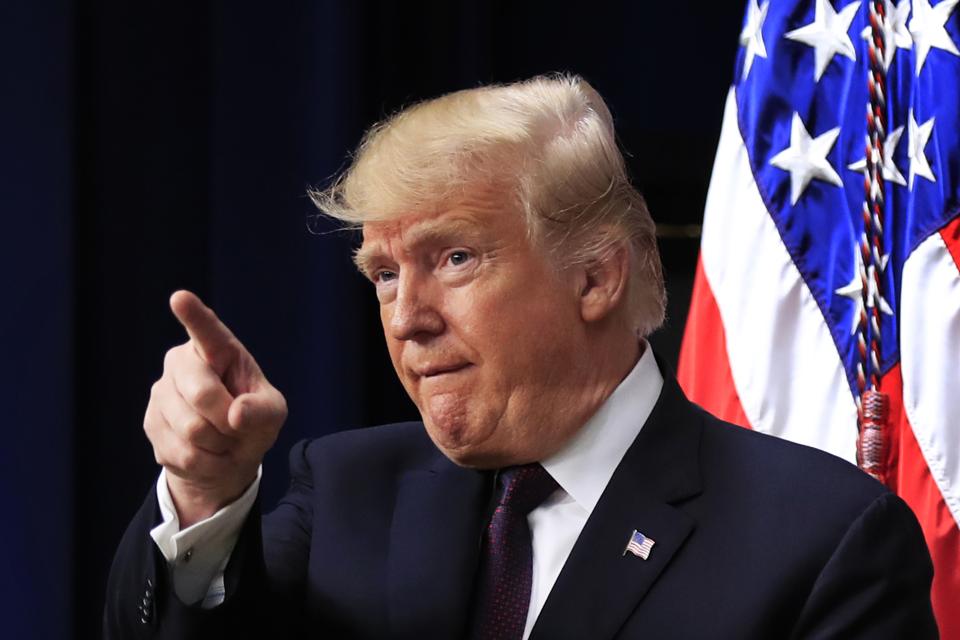 In this Nov. 15, 2018 photo, President Donald Trump speaks during a conference at the Eisenhower … [+] Executive Office Building on the White House complex in Washington. Trump said in a statement Tuesday that the U.S. does not condone the killing of the U.S-based Saudi columnist, but that “foolishly” canceling $110 billion in arms sales _ as some in Congress have suggested _ would only mean that Saudi Arabia would go to other countries to acquire them. (AP Photo/Manuel Balce Ceneta)

The senators all have a primary interest in the domestic oil and gas industry. Two are from Alaska, two from North Dakota, one from Oklahoma and one from Mississippi. All are from states with oil and gas and refining industries. They want to see oil prices rise from the low $20s, which is where the US benchmark currently sits. Most American oil producers, particularly shale oil producers, are facing unsustainable losses at the current price.

However, in the letter the senators made an odd suggestion. They wrote, “Riyadh should leave the antique OPEC cartel immediately and join the United States on the global stage as a free market energy powerhouse.” This makes sense according to American ideology, but it would not be helpful for the industries in their states. In fact, the OPEC cartel and its preferred manipulation of the market is the most likely way to raise the price of oil. If Saudi Arabia were to abandon OPEC for good and embrace a free market energy policy, we would have low gas prices for the long-term, but American oil and gas production would suffer tremendously.

In fact, the letter actually appears more as a complaint about Saudi Arabia as a whole and as a statement to the Trump administration that it should take a tough stand against the world’s second largest oil producer. (The U.S. is the largest producer). The senators stated that, “[t]he American people grow weary of providing for the defense of Saudi Arabia.” Further, they argued that, “[t]his relationship will be difficult to preserve if turmoil and hardship continue to be intentionally inflicted on… American companies.”

While the senators in the letter assert that Saudi Arabia intentionally lowered the price of oil to harm the American energy industry, this claim is disputable. Most likely, Saudi Arabia miscalculated and did not realize the price of oil would drop so low based on its decisions. After all, the extreme low prices are a threat to the kingdom’s monarchy as well. Nevertheless, the senators wrote that, “[o]ur nation’s energy dominance, which President Trump has carefully nurtured over the past three years, is now under direct threat from a country that professes to be our ally.” These are angry words.

The letter does display wisdom on the part of the senators that the administration should listen to. The senators wrote, “the Kingdom risks its bilateral relationship with the United States.” This is the point the administration—and all subsequent administrations—must make when Saudi Arabia does something not to America’s liking. The Saudi monarchy cherishes image of friendship with the U.S. much more than the U.S. needs anything from Saudi Arabia. When it comes to oil policy, human rights, Middle East geopolitics and other issues, the U.S. can and should take a tough stance against Saudi Arabia when necessary. As the senators make clear, the U.S. has much leverage from litigation to military support to potential sanctions.

This letter is not a proposal for good policy. It is a sign that sentiment against the Saudi monarchy is strong in D.C. today.

Economic Forecasting In The Age Of Coronavirus — 3 Tips