Home Business New Orleans Could Be The Next Coronavirus Epicenter, As Available Ventilators Dwindle
Business

New Orleans Could Be The Next Coronavirus Epicenter, As Available Ventilators Dwindle 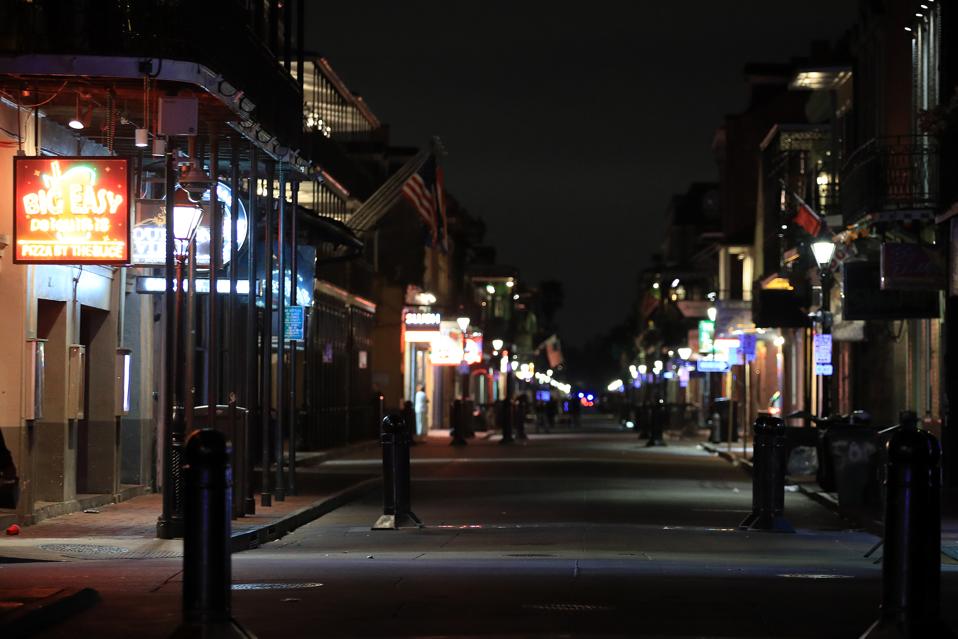 The usually crowded Bourbon Street in New Orleans was empty last week as Louisiana Governor John Bel … [+] Edwards ordered bars, gyms and casinos in the state to close to combat the spread of coronavirus.

Topline: New Orleans, Louisiana, now has the world’s fastest rate of growth for new coronavirus cases and may become the epicenter for the pandemic⁠—  dashing earlier optimism that warm, humid and less-dense areas would largely escape the virus.

Key background: With some early evidence pointing to the virus having a slower spread in warm, humid regions, New Orleans would seem  poised to take advantage of that, with its swampy environment. Experts had hoped warm weather and humidity coming this summer could lend a hand in halting the pandemic.

“If you look at this epidemic, we’ve not seen much in the hotter parts of the country. Texas has not had a lot, Arizona has not had a lot, then all of a sudden ⁠—bam!⁠— it appears in strength in New Orleans,” Peter Hotez, dean of the National School of Tropical Medicine at Baylor College, told Reuters.

New Orleans also doesn’t have the density of places like New York City, the hardest-hit area in the U.S. Experts say the virus spread rapidly there in part due to packed subway cars, crowded public areas and cramped apartment buildings. The coronavirus pandemic has hit Louisiana as it already struggles with public health problems— the state is already the epicenter of the HIV epidemic in the U.S.

Tangent: A key factor of why coronavirus has hit New Orleans so hard may be the same reason why the city is known all over the world: Mardi Gras, the celebration before Ash Tuesday that brings millions of people to party in the streets. This year, Fat Tuesday fell on Feb. 25, which was after the coronavirus was introduced to the U.S. but before officials put the public on high alert. Mardi Gras was “the perfect storm,” to spread coronavirus, Rebekah Gee, who leads the health care services division at Louisiana State University, told Reuters.

“So New Orleans had its normal level of celebration, which involved people congregating in large crowds and some 1.4 million tourists,” Gee told Reuters. “We shared drink cups. We shared each other’s space in the crowds. We shared floats where we were throwing not just beads, but probably coronavirus off Carnival floats to people who caught it and took it with them to where they came from.”

What to watch for: The news out of New Orleans does not bode well for Houston, Texas, the fourth-largest city in the U.S., which has already seen a surge of confirmed cases across its metro area. Similarly hot, humid and relatively spaced-out like New Orleans, there were hopes that Houston could manage to avoid the worst of the pandemic. Hotez said New Orleans could kickstart a chain reaction for the rest of the American south, where nearly half of all Americans without health insurance live.

Crucial quote: “[New Orleans is] on the trajectory to become the epicenter for the outbreak in the United States,” Gee told Reuters.

Firefox Maker Gets In To The Red-Hot VPN...

Designing Your Workspace With The Next Decade In...

Kyle Kuzma’s Days With The Lakers Could Be...

There’s A Big Problem With The Focus On...

Trump Contradicts Barr, Says He Has ‘The Legal...